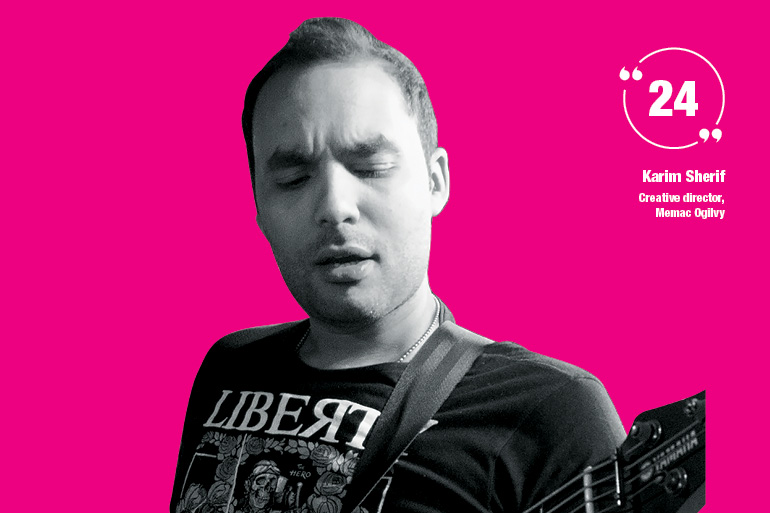 If you haven’t seen Karim Sherif, you have probably heard him. An 80s kid, Sherif juggles several hats: radio and TV voice-over artist, rock guitarist, cereal-eater and of course, creative director. His creative escapades started back in college when found himself at a crossroads between his three major passions: music, arts and writing. He decided to study advertising and PR because it merged all three.

He started his career as a copywriter at Tarek Nour Communications, Egypt, in 2004, and has spent the last 15 years working in multinational agencies such as Euro RSCG, DDB and Impact BBDO, working on brands such as Vodafone, Pepsico, Henkel, Coca-Cola, Mondelez, Etisalat. He has also won – and judged – several regional and global award shows.

Balance. Be assertive but humble, be gentle but with vigor and be loud but listen.

Not easy to abide by, but still good advice.

Each creative has a unique style of doing things, some are detailed dictators, others may be articulate intellects. The important thing is to find your own style, picking up a little of what you can learn from everyone on the way.

I guess it teaches you patience, which is a characteristic I lack at times.

There are quite a few but I’d like to narrow them down to three hypothetical beings:

Clinton 2000: Mindless suit that forwards briefs word-for-word as is from the client.

Onederkind: Creative or CD who hasn’t come up with anything new since that one lucky idea that won 48 years ago.

Askoholic: Member of client team who asks obvious questions for the sake of saying something in a meeting.

There is a scene in the beginning of Guns N’Rose’s welcome to the jungle music video where a 21-year-old Axl Rose steps off the greyhound bus after a long ride from Lafayette, Indiana and takes in the dangerous, derelict vibrant streets of downtown LA. I replay that specific scene in my head with a thundering “what if” I’d packed up at 21 and took off to Hollywood boulevard and got into rock music video directing or playing a full house at the viper room.

Is this one of those trick questions where I have to say things like “I’ll donate some to charity” and stuff? The first thing I’d do is hire a butler and call him “Phantomas”.

I love it, I wouldn’t do anything else. The challenges, the people and the ability to combine your passions to help put a dent in the universe with a simple breathtaking idea is priceless.