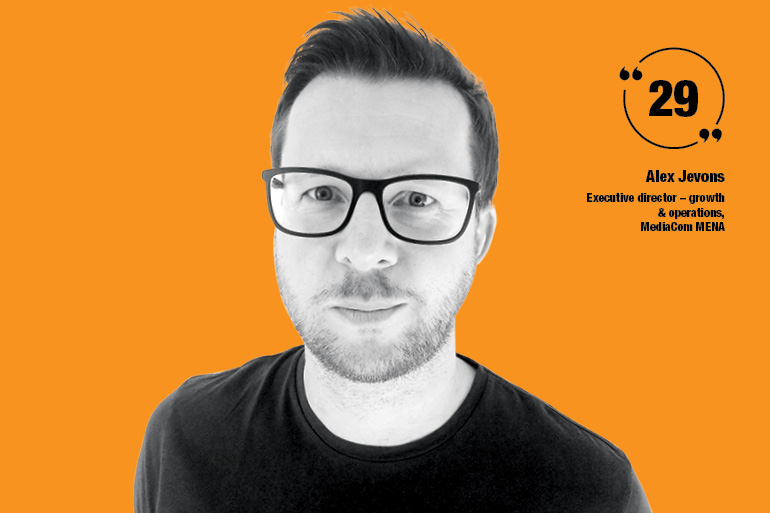 A British media and marketing professional of 16 years, Alex Jevons has spent the past 14 years working in leading roles for a major broadcaster, client and agency across MENA.

His first six years in the Middle East were spent working in various network planning and operational roles for MBC Group, before moving in 2011 to FMCG giant Reckitt Benckiser, taking on the role as head of media MENAT.

After a successful three and a half years working client side, Jevons moved to the agency world with MediaCom in early 2015. Initially hired as the META business director on Mars, he quickly became client managing director for 15 regional accounts that included Bose, Bayer and Siemens.

More recently, Jevons has moved away from client-facing roles and is currently developing operational transformation and leading new business development for the agency across MENA.

None of this really matters. To quote the great American philosopher Ferris Bueller, “Life moves pretty fast, if you don’t stop and look around once in a while, you could miss it”.

Embrace the chaos and create your own path. Nobody will do it for you.

The ‘last Thursday of the month’ probably isn’t what you’re looking for, so seeing hard-working, genuinely talented colleagues get recognition and promotion is a close second.

When I was 15, I had dreams of becoming an investigative journalist right up until my GSCE English teacher gave my mum a rather nervous smile on careers evening that gave every indication that I should consider a different path! Well, screw you Mrs Richards, this is 2019 and I keep hearing I can be whatever I want to be, so probably an investigative journalist astronaut.

I’d love to say I’d be a benevolent benefactor of an impactful not-for-profit, but the reality is I’d probably not tell anyone, live off the interest and play golf.

Because I don’t have $10 million… So I have to do something to pay for my kids after school clubs.