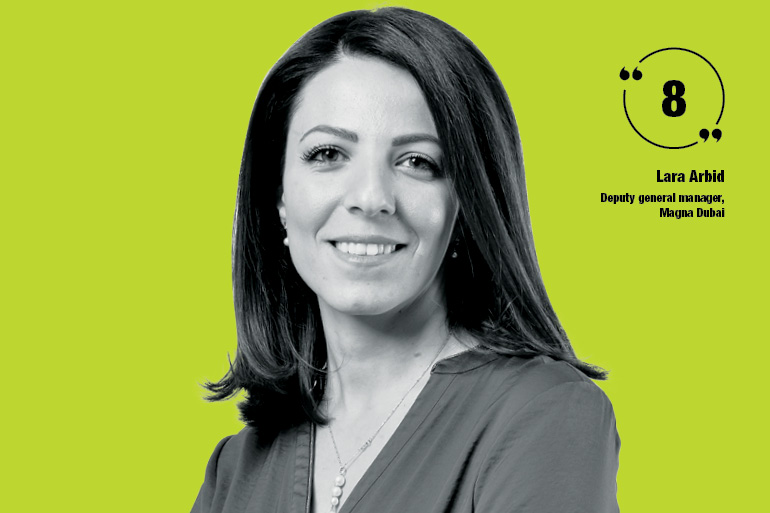 Born and raised in Riyadh, Saudi Arabia, Lara Arbid started her media career back in 2006 when she joined Starcom MediaVest group working on several accounts like Saudi Telecom, Rabea Tea, General Motors and Emirates Airlines. In 2009, she moved to Mindshare where she led on the local HSBC (SABB) business in addition to being involved in accounts like Safi Danone, Nissan Auto – Al Issa, Renault, Body Masters & Boehringer Ingelheim and being part of the new business development team. Six years down the road, she wanted to step away from the day to day operations, and joined MCN as Initiative’s planning director in KSA across key clients like Mobily, KIA – Al Jabr, SACO and American Express in addition to leading on all new pitches.

Being an ambitious feminist, toward the middle of 2016, she took on a challenge to set up the Magna Global operation in KSA becoming the first lady to lead an office in Riyadh. Magna became profitable within three months of inception and in less than two years she was able to put Magna on the map in KSA, given her media expertise, local know-how and relationships contributing to the ranking achieved by Magna in the region being the fastest growing agency as per RECMA. In July 2018, she took on a new task to expand her regional skillset by moving to the Magna Global Dubai as its deputy general manager.

Relationships are conscious and intentional, it takes real effort to build and sustain them… we are in a people’s industry so this is maybe one of the most important investments you will ever make.

I have two that are my favorites:

1. Do not ASSUME! Well, first of all it’s all in there in the word (people who know me, will know what I mean). Second, although we are in the business of communication, most of the time we fall into the trap of miscommunication and assumptions, which we should try our best to avoid.

2. Always keep your word. This is the highest level of respect you can show anyone! Whether it’s abiding by a deadline you’ve committed to or an agreement you’ve made… make sure you respect yourself enough first and the other person by always honoring your word.

Bringing it all to life… at the inception phase of any brief or campaign it’s all just an idea, but being able to translate it all into a tangible solution that drives results is what makes all the efforts and long nights worth it.

The time and effort wasted on the game of power and politics.

I would probably have my own business planning kids events and since I really like passing on my knowledge, I would probably be sharing my experiences through sessions and talks at colleges and high schools.

First, I would open my mom’s dream restaurant.

Then, I would start a form of self-sustaining NGO that will help empower youngsters with education especially females.

I would also like to think that after fulfilling number 1 and 2, I would still be able to afford a small beach house somewhere nice and quiet.

It’s a challenging industry and I love a challenge! But in addition to that, it is fulfilling to see how you can impact different people’s lives, to inspire and help them transform into leaders.