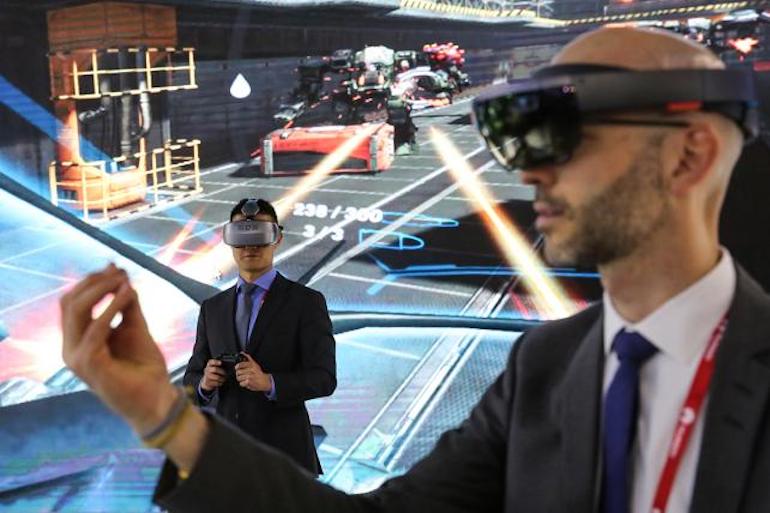 If there was a single conclusion to be drawn from Mobile World Congress – the wireless mobile industry’s largest annual event that was held in Barcelona last week – it’s that the smartphone makers, carriers and networks in attendance have roughly 5,000 reasons to be excited about 5G, or fifth-generation wireless system technology.

MUST READ: Is mobile advertising in MENA on hold?

Here are four things we learned at mobile’s major moment at MWC:

During his keynote session that kicked off the event, Ericsson CEO Börje Ekholm announced that 5G is “open for business”.

The wireless technology will bring faster speed (for moving data) along with lower latency or lag time, and the ability to connect many more devices to each other at once, paving the way for the internet of things, smart homes and more.

As the point person driving Intel’s stated evolution from a PC-centric company to a data-driven powerhouse, Aicha Evans, senior vice-president and chief strategy officer at the company, also has 5G on the brain.

There were, of course, a few slightly more skeptical observers on hand. “It isn’t going to see mass global adoption for years,” says Jennifer Wise, a senior analyst at Forrester. It is certainly coming, though.

The Internet of Things conjures images of smart refrigerators and tweeting toilets (well, one can dream). As a buzzword that’s been around for years now, the very term IoT has picked up some ambiguity.

Mike Troiano, the VP of IoT at AT&T (say that three times fast), was on hand in Barcelona to break down how the phone in your pocket connects to your wheels.

Mobile providers across the board can facilitate real-time decisions from afar – does your car need a software update? Is your dirt-digging Caterpillar operating at maximum efficiency? – based off the locations of their machines and diagnostics. For example, when Hurricane Harvey ripped through Texas, Tesla pushed through a firmware update that gave its cars more range. No mechanic required.

But just because brands and marketers have this tech at their fingertips doesn’t mean they should get complacent about how and where to deploy it.

“We oftentimes get the technology right quickly. We don’t think about the impact of that technology across the enterprise,” says Troiano. “And that’s really important to think [about] on the front end before we deploy these things.”

Artificial Intelligence is another buzzword bugaboo: It’s nearly impossible to separate the hype from reality. That line is equally fuzzy at MWC, but that doesn’t make it any less cool.

Chinese networking and telecom giant Huawei made headlines in January for releasing its Mate 10 Pro phone in the US. It comes with an embedded Kirin 970 chip, which the company claims makes it the first smartphone with an AI chip inserted in it. The phone, for example, can recognize objects you point its camera at, be it a puppy, a bicycle or a ball – and adjust shutter speed accordingly.

IN-DEPTH: A deep dive into the world of AI

It’s also able to learn from the user’s behavior; the company claims that over time it can predict what its user wants to do based on previous actions. It will supposedly know which apps you are most likely to use when, and allocate processing power accordingly.

That’s all well and good. But the phone also comes with a software development kit that lets anyone hack away at its AI potential. In a span of just five weeks, a Huawei developer was able to turn the phone into a remote-control device that can drive a car. A gimmick? Sure. But it gave us the opportunity to hop into a “driverless” Porsche in Barcelona.

“We’re giving it the ability to not only recognize that it’s seeing an object, but to understand what that object is and therefore maneuver accordingly,” says Huawei global senior product manager Peter Gauden.

Forrester’s Wise came to MWC expecting to have her mind blown. But by the third day of the tech bacchanal, she was feeling a little let down.

“Some of the VR experiences are still missing the key components to make them good from the user experience perspective to fuel that adoption,” she says.

Wise, who has a background in marketing and specializes in the customer experience, says she tried one VR experience where she was on a boat. But she felt like a disembodied head – “you look down and there’s nobody there … and a lack of haptic feedback.”

MUST READ: Reality check: the world of VR

Still, she holds out hope for virtual reality and cites a few current use cases for it, and its cousin augmented reality.

“When I’m looking at the VR headsets, we’re seeing they’re becoming more immersive, there’s more technology. We’re hearing that 5G is going to fuel these experiences, make them really, really fast,” she says. “But there are still a few hurdles,” rooted in the fact that 5G is still not universally available.

The biggest opportunity for brands, says Wise, is in gaming.

“If you’re a company that wants to build greater empathy with a customer and create a stronger memory of the experience with a customer, then you have an opportunity to do that through VR,” she says. “It is the most immersive, empathy-building experience you can do. Or if you are a company that has a long sales cycle – that has a high-consideration product – then you have the opportunity to let people see the experience before they experience.”

OPINION: How to reboot the future of advertising

One example is Porsche, which, through augmented reality, can let potential customers see what it feels like to have one of its cars in the driveway. Which is great. If you have a driveway.

Wise was also somewhat deflated by the robotics she’s seeing here, which tend to be more gimmicky than practical. She spent some time getting to know one in particular but walked away unclear on its purpose.

“I still don’t know what it was supposed to do,” she says. “It walked around, smiling at people, it followed you around. It waved. That’s where being cool as a technology isn’t enough.”