What employers from the advertising industry are saying about salaries in the GCC. 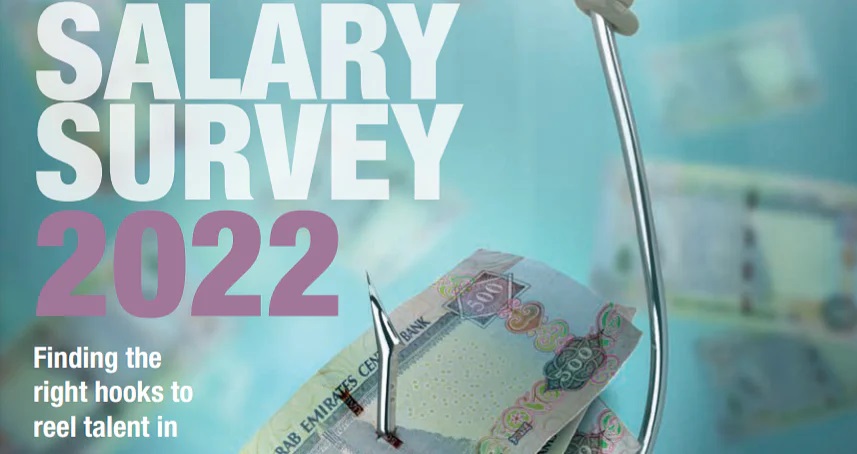 After we looked into the salaries as shared by the industry here, in Part 2 of Communicate's Salary Survey series, we explore what industry players told us about the state of their workforce. 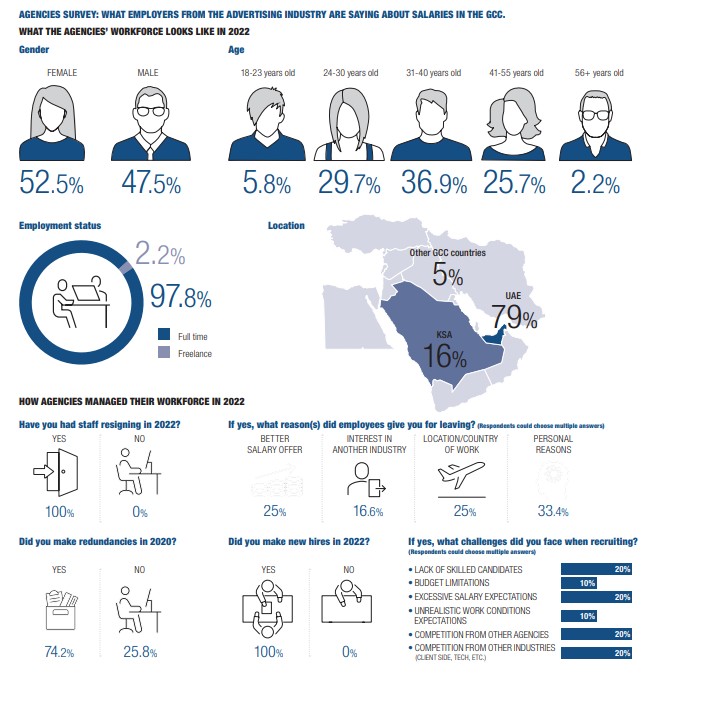 • Hiring is back in force. Although most agencies had to let some employees go in 2022 and all saw employees resigning, this apparently was routine churn. Every single respondent has been hiring and none signaled that the infamous “Great Resignation” actually materialized in the region.

• Women are back to work. After a couple of years when they had to manage home-schooling and often sacrificed their job (or were sacrificed, if we look back at last year’s Salary Survey), they now form the largest employee contingent in the industry, boosted as well by new labor laws in the UAE and KSA supporting diversity and equity.

• Full-time is the norm. Even though an increasing number of professionals are considering going freelance, full-time employment remains the preferred option for employers.

• Competition for talent is on. Agencies need to spar not only with their peers but also with other industries, particularly tech. Not that this is a new phenomenon, but the race is more aggressive than ever. Salaries remain a pain point with job seekers likely to have somewhat higher expectations than what employers are looking, and are able, to offer, keeping the industry under pressure. 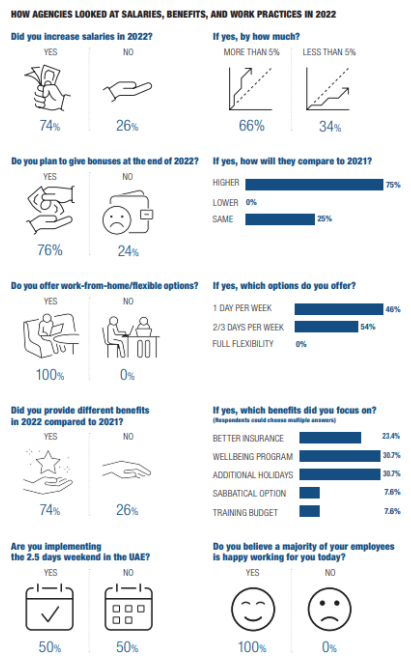 • Salaries are up. After two years of drought, most agencies have adjusted salaries back and given raises in 2022 – a reflection of not only the health of the market but of their recognition that retaining talent requires higher wages. Indeed, agencies that have implemented salary hikes, more often than not based on performance and delivery, did it with gusto, increasing pay by more than 5%.

• Bonuses are back with a vengeance. Whereas, last year, fewer agencies gave bonuses, and these bonuses were relatively low, in 2022, more are giving more.

• Flexibility is the big game changer. Agencies are still figuring out which model works best for them but finding the right balance between employees’ preferences and maintaining the agency culture is their core priority.

• Benefits are the rule. Agencies are also testing out different benefits for their employees, focusing on well-being programs and additional days off, some for birthdays, others for religious holidays. Profit-sharing schemes that were considered last year are no longer in sight.

• Friday mostly remains a full day. The UAE’s decision to propose a 2.5-day weekend is yielding interesting results so far. Very few agencies decided to formally adopt the practice, but for those who did, employees’ satisfaction was manifest. 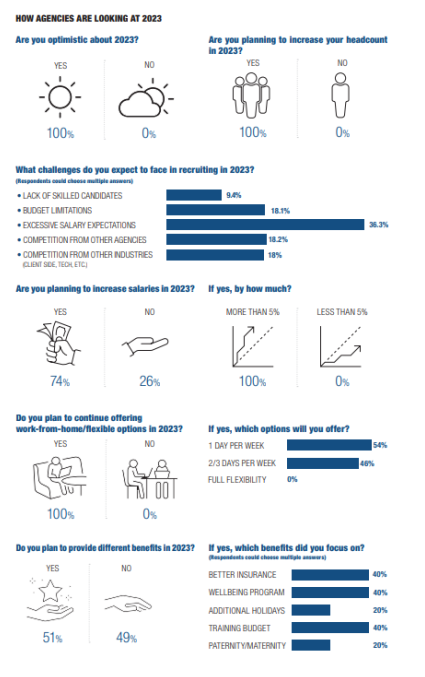 • More of the same. A few months before the end of 2022, agencies seem satisfied enough with their current modus operandi and are not looking to change anything major in 2023. This means continued hiring, more salary hikes, and benefits along the same line – except for the introduction of extended paternity/maternity leaves in a few cases.

• Less work from home. One minimal difference between what was done in 2022 and what may happen in 2023 is slightly more agencies looking at allowing fewer days working from home. 54% say they’ll allow for 1 day per week working from home in 2023, instead of 46% today.

In part 3, to be published tomorrow, we'll look at what employees themselves told us about their current work situation.