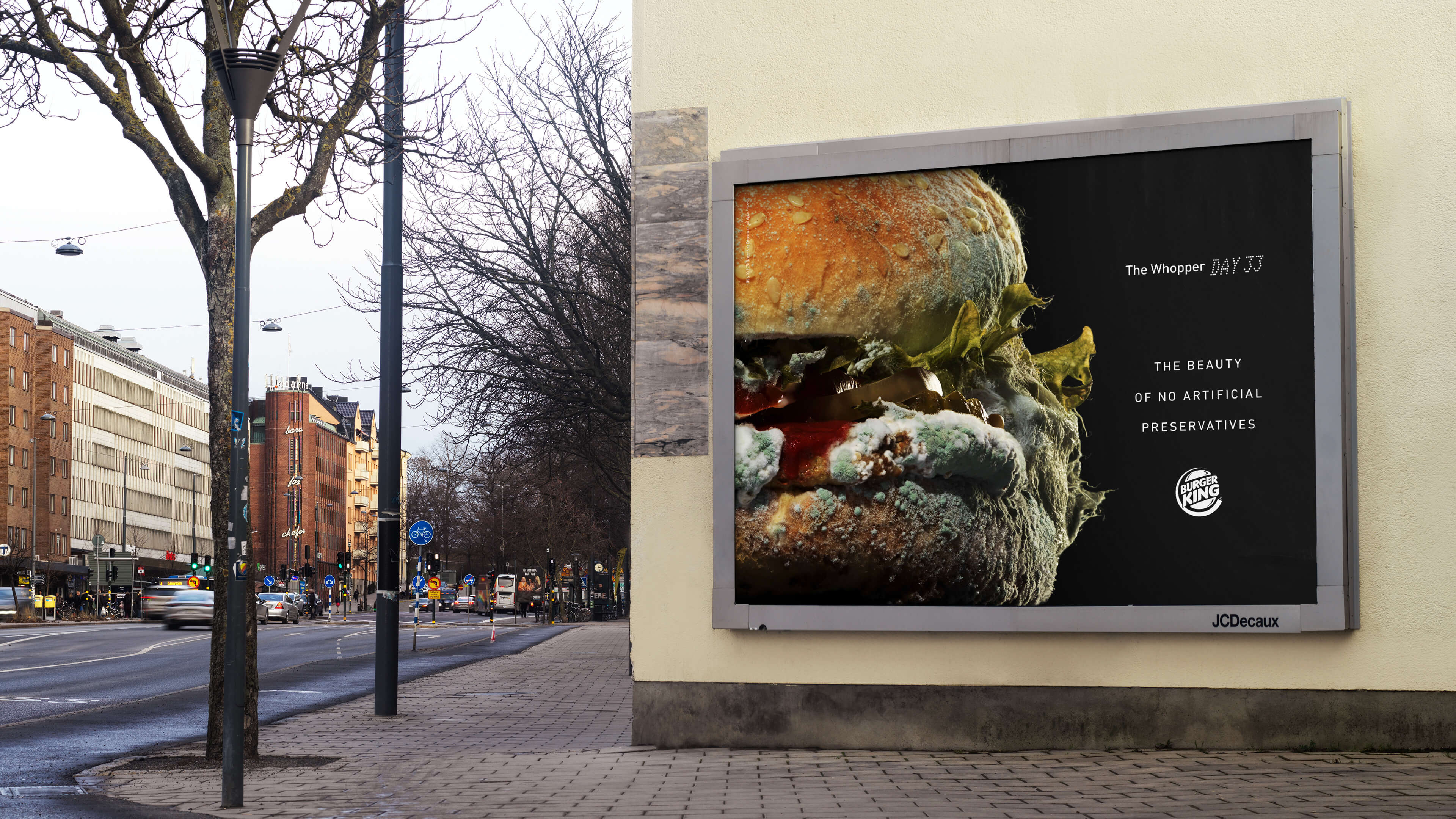 • Network of the Year: Wunderman Thompson

In an extraordinary hat-trick, the Film, Print, and PR Grand Prix were won by INGO Stockholm/David Miami/Publicis for their justly famous “Moldy Whopper” campaign, which demonstrated in a fascinating (and brave) way that Burger King had removed artificial preservatives from its iconic menu item. The work reaped media coverage all over the world and was one of the year’s creative highlights.

Commenting on the Film win, Björn Ståhl, Executive Creative Director at INGO, said: “Winning a film Grand Prix is always very hard and it’s absolutely amazing to win this one. We worked so hard on this campaign, this makes it totally worth it.”

For the Print Grand Prix, Eduardo Marques, CCO of Publicis, said: “Such an amazing achievement to win an Epica Print Grand Prix. But not only that – it’s such a great achievement for the whole food and product industry too. BK have transformed the category’s advertising so that from now on it is more transparent, real, and honest. That’s also a beautiful thing.”

Commenting on the PR Grand Prix, Pancho Cassis, Partner and CCO at David, said: “After everything we suffered to make this campaign happen, it’s an absolute honor to receive this award from one of the most clever and demanding juries there is: the advertising journalists. Truly grateful to all of them for this recognition.”

The Responsibility Grand Prix for cause-related work went to Wunderman Thompson Buenos Aires for “Through Your Eyes”, a music video from Sony Music musician Dante Spinetta and organ donation NGO INCUCAI. The video appeared misty until users pointed their device’s camera at another person’s eyes, when the picture became clear. It encouraged cornea donations.

Daniel Minaker and Sebastián Tarazaga, Latam Chief Creative Officers for Wunderman Thompson, jointly commented: “We are very happy and proud to make history with this Grand Prix, the first for Latin America at the Epica Awards. We want to thank Sony, INCUCAI, Dante, Landia, Tokyto, and the entire Wunderman Thompson Argentina team, who did everything they could to make this idea happen. It is a great joy to be able to help the work of Latin America appear on the global creative map.”

The Responsibility jury also awarded a Special Mention to the healthcare film “The Last Present,” for the Canary Islands government, by Tenerife-based agency Mientrastanto. Although it did not win a Responsibility Grand Prix, it was singled out for its drama and potentially positive impact.

The Digital Grand Prix was won by 72andSunny Los Angeles for “Swipe Night,” which reignited interest in the Tinder app by transforming it into a complex multi-player adventure game that entertained users and brought like-minded people together.

Commenting on the win, Matt Murphy, Global Chief Creative Officer of 72andSunny, said: “It’s an honor having Tinder ‘Swipe Night’ recognized with a Grand Prix by the objective jury of journalists that make up the Epica Awards. 72andSunny believes in the power of unignorable creativity and this is an achievement we're incredibly proud to celebrate.”

The Design Grand Prix went to Canadian agency Rethink for the “Heinz Ketchup Puzzle,” a head-scratching, entirely red jigsaw puzzle that promised to keep everyone occupied during lockdown – and also generated healthy dollops of social and traditional media coverage.

Mike Dubrick, Partner & Executive Creative Director at Rethink, said: “We're thrilled that Heinz Puzzle has been named the Design Grand Prix winner. A huge shout-out to the entire team and our amazing clients who worked tirelessly during lockdown to bring this to life. And of course, thank you to the jury of journalists for this honor.”

The jury decided not to award an Alternative Grand Prix as there was no clear winner.

Commenting on the winners, Epica Editorial Director and jury moderator Mark Tungate said: “This year the accent was clearly on innovation, as many of the big winners stood out with attention-grabbing new spins on existing media platforms. In an extraordinary period, agencies worked harder than ever before to prove that a historic crisis can’t put a brake on creativity.”

The MENA region also grabbed a win thanks to Home Centre, a Landmark Group company, and FP7 McCann Dubai for the "A Dad's Job" campaign that was awarded a Silver in the Retail Services category.

This year, Epica received 1980 entries from 59 countries. This was lower than previous years but higher than expected given the circumstances. The highest number of entries came from Russia, followed by Germany. In terms of networks, Wunderman Thompson and BBDO were particularly well represented.

Founded in 1987, Epica is the only worldwide creative award judged by journalists from the marketing, design and advertising press, as well as specialist reporters in fields ranging from automotive to VR.

Disclaimer: Nathalie Bontems is a jury member of the Epica Awards 2020 edition.

You can watch the full ceremony here.