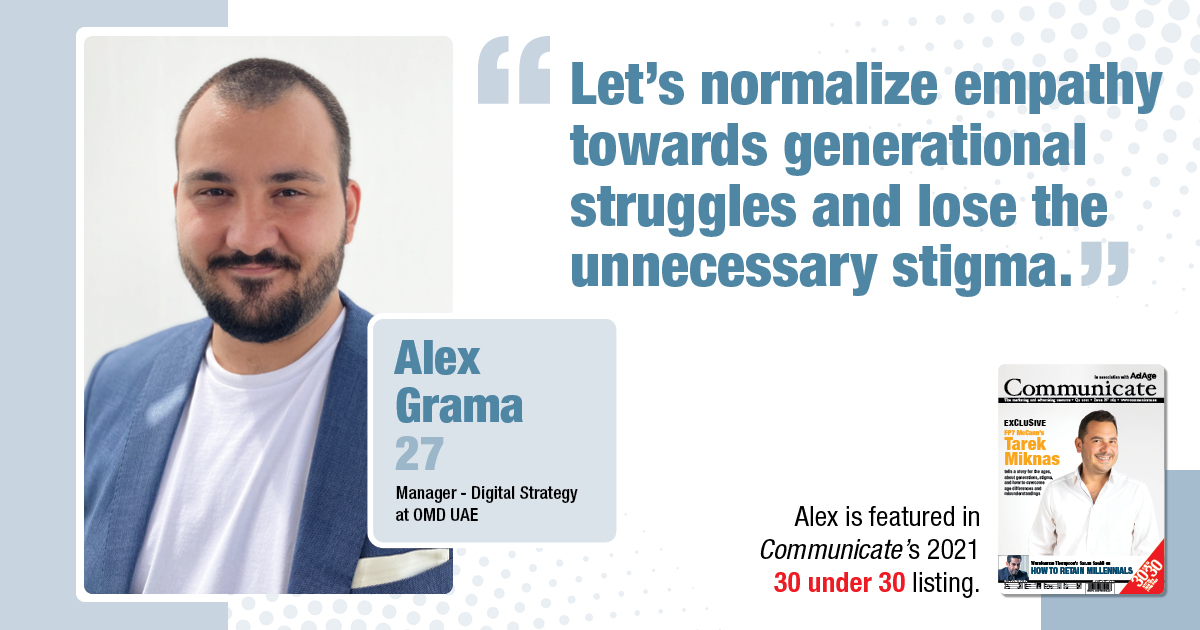 Alex started his career as an Integrated Media Planning Executive in 2016. In 2020, he joined the INFINITI account in OMD UAE as a Digital Strategy Manager to bridge the branding and performance objectives and push the data- driven agenda of one of the region’s most awarded automotive brands.

With a combination of strategic thinking and technical prowess to create synergistic digital solutions, Alex became OMD’s data champion. He prides himself on his ability to drive best-in-class data practices through customized measurement frameworks.

Originally, I didn’t aspire to join the digital marketing ecosystem but I’ve always had an affinity for tech and creativity which, when combined, define the apex of what digital stra- tegy should stand for. Media planning came naturally to me as a junior executive before I started discovering what I enjoy the most: data and how to use it creatively.

I contacted all UAE-based agencies until one replied. I conducted interviews via Skype and incessantly followed up until I received an intern- ship. I worked 12 hours a day and learnt as much as I could for six months until I convinced them to give me a job. The rest is history.

Nobody in particular. I respect and gravitate towards anybody I can learn from and who can guide me towards a better version of myself. If I have to choose a certain typology, I look up to the new generation of foreign and minority filmmakers being recognized internationally for their creative genius, such as Chloe Zhao (Nomadland). Their success is highly inspiring.

In an effort to be proactive, start new conversa- tions, and delve deeper into new initiatives, my Director, Roxanne Gahol, gave me a piece of advice I won’t forget: “If you never ask, the answer is always no.” This ensures that I live day by day without any regrets or questions, allowing me reassurance that I’ve done my best.

Easily, the first thing I tell any new joiner faced with overwhelming amounts of work is “If everything is urgent, then nothing is urgent.” While prioritization is effective, having a healthy relationship with your client based on common sense is vital.

Generational criticism is useless without under- standing the context in which that generation formed itself and the events they’ve been through. We’re all facing generational struggles that define the zeitgeist in which we live, from Baby Boomers (and the fresh new world created by the end of WW2) to Gen Z (and their Y2K panic, 9/11, and 2008 recession). Let’s normalize empathy towards generational struggles and lose the unnecessary stigma.

At OMD, I found myself in a unique position between planning and performance that allowed me to bridge the gap between consumer empathy and digital signals. By following OMD’s “Better Decisions, Faster” mantra, I was inducted to think beyond silos and look at the experience that we’re providing to the audience first, beyond anything else.

I can distill this lesson into two pillars that are still guiding me to this very day: independent knowledge gathering and professional integrity. In the hierarchical world of accomplishments and expectations that define growth, nothing speaks louder and clearer than hard quality work.

The opportunity to grow. I’ve never experienced in any previous jobs such widely open paths for growth as much as I’m currently seeing in OMD. The thought that your work is being appreciated and incentivized is truly great and provides a great springboard for success.

Trying to find a balance between being a jack of all trades and a master of one. With the constant evolution we’ve been seeing in the industry, there’s been a demand for knowledge upskill in breadth (in terms of concepts) and depth (in terms of nuances and technical skill).

I can’t picture myself doing anything other than what I do now. I have a well-defined path and a purpose, which I am working hard to achieve. Secondly, I’ve discovered something that I am actually good at and enjoy doing. I don’t see it any other way.

Yes, a bookshop. I love reading books as much as I love owning them. An independent bookshop to compete with Amazon is definitely on the horizon!