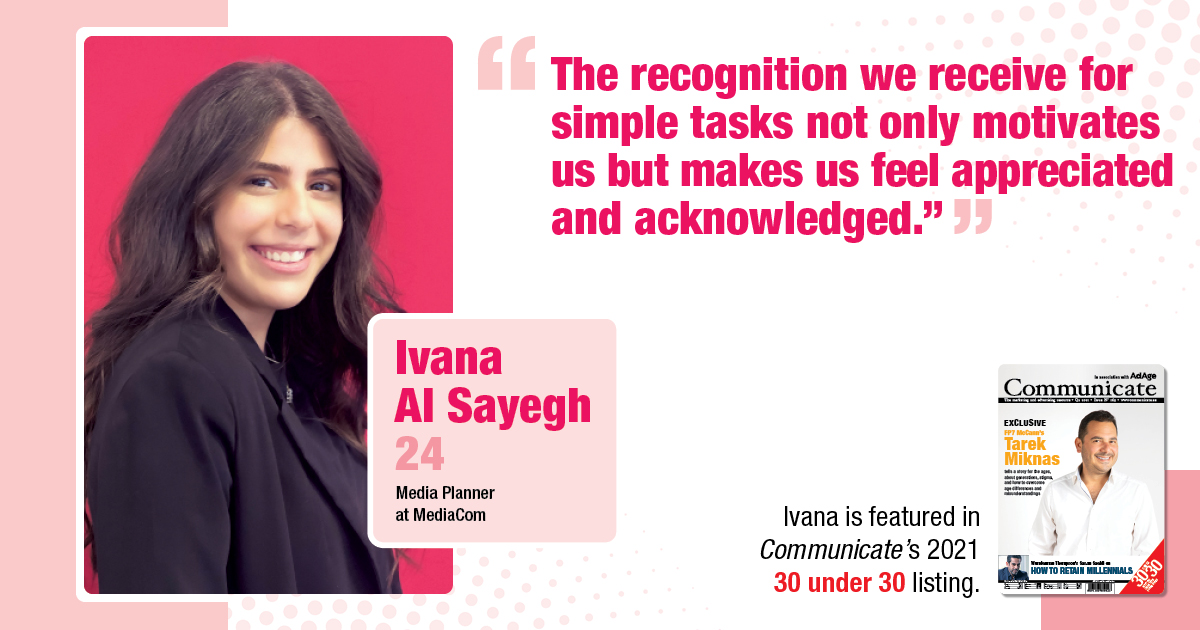 Ivana was born and raised in the UAE and attained her Bachelor’s degree in Liberal Arts and Sciences from the Canadian University of Dubai. Ivana has been working in the media industry for almost four years.

I kickstarted my career in a market research firm for two years, which helped me recognize patterns that different industries implement through different mediums. It intrigued me and led me to transition into a more media- focused career path.

I landed my first job in a media agency by applying on LinkedIn. A few days later, I was contacted by MediaCom’s HR for my first interview with the Associate Director. The following week, I was interviewed by my current team and I joined a month later.

I look up to all my mentors and to those who have invested time in guiding me with their knowledge. When I become a leader, I’ll apply the same approach to building an adaptable and self-reliant team.

One of my previous managers would always tell me to do the best I could and to not guilt-trip myself over situations that didn’t turn out as planned. Similarly to what Maya Angelou said, “Do the best you can until you know better. Then, when you know better, do better.”

I think both generations are not given enough credit for being more accepting of racial and ethical differences. At the same time, they dominate the digital scene; therefore, their media consumption is always misinterpreted although I believe they utilize this with an eagerness to learn about what is happening around them.

Being born and raised in the UAE and having exposure to different ideas and cultures makes it far easier for one to adapt. Furthermore, after having worked on an FMCG client for two years, my data analytical skills have advanced to a point where they have now become second nature.

It is not just one lesson, because no day is like the other in this dynamic industry; every day presents a challenge and a lesson. The learning curve is never flat. I wouldn’t highlight a lesson; I would consider the whole experience.

The most rewarding thing about my job is my manager, who believes in his team’s capabilities, his positive ‘We can’ attitude, and his active involvement in our career progression. Further- more, the recognition we receive for simple tasks not only motivates us but makes us feel appreciated and acknowledged.

The dynamic aspect of this job could be looked at as two sides of the same coin; you need to stay updated with many aspects within a short period of time.

I always want to find balance and fairness in all situations. If it weren’t media, it would unquestionably be law.

Yes, I would like to start my own venture within the media sphere.