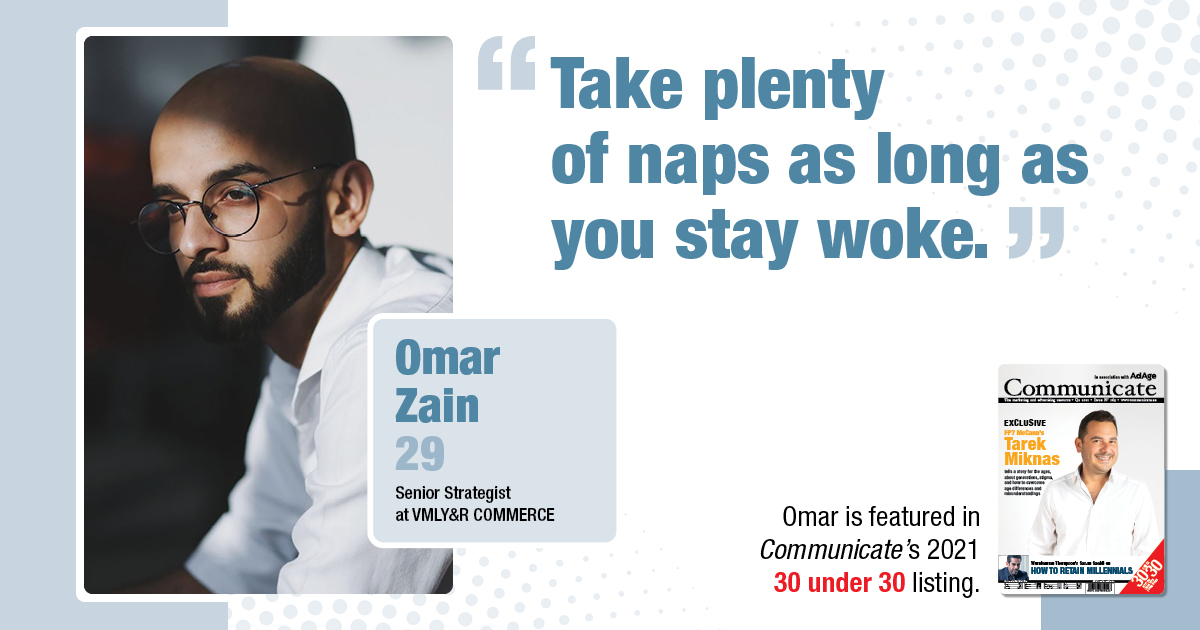 Aproud third-culture kid with confusing roots and ambitious goals, Omar’s romance with advertising started a bit late. He ditched architecture after watching Don Draper sell the ‘toasted’ Luckies on an episode of Mad Men, which led him to chase down an internship at Leo Burnett. Within months, he got hired by Geometry to work on none other than the Luckies account.

From then on, Omar’s growth has been a success story of bringing in the strategic cultural angle across a range of global brands.

The same way everyone wants to change their career based on the Netfix show they are binging, I decided to find something a little more fulfilling creatively than architecture after finishing Mad Men.

After graduation, I was running through the six with my woes, road tripping around Canada with the boys, and I saw a girl I had walked the stage with land an internship at Leo. So, I harassed her for an interview, which was conducted over a smoke break. I started then and there.

Elon Musk – in many ways. I have a scary obsession with space and I like people who find solutions to things that bother them.

The first rule is that everyone’s an idiot, and everyone includes you. So, keep it simple.

Take plenty of naps as long as you stay woke!

I think the disapproval from an older generation is pretty standard at this point and probably dates back to the stone age. Speaking of stone age, dinosaurs trying to define a generation without talking to them directly seem a bit absurd to me.

I challenge the hybrid label by establishing myself as a strategist with a well-rounded understanding in all three disciplines – maintaining client relationships, finding smart business solutions, and building strategies with a ‘culture’ angle that springboards creative concepts.

Under-promise, over-deliver. Let your work represent your skills and capabilities; there is no need to oversell yourself to a client before solving their problem.

When you work in an agency that values your craft and ambitions, you get the luxury to work on some brands just for yourself – be it cars, toys, booze, or shoes. I love being able to pick my challenges.

Buzzwords! There’s not much I can complain about except for people using them to mask their inability to explain things.

Might sound lame but this is exactly what I would be doing, because advertising was my answer to this question when I was doing architecture.

Plenty of time and opportunity for the future, but the ultimate goal would be to buy a small island in Cambodia to open a restaurant that doubles up as a creative studio for brands and companies to come for smart project-based solutions.