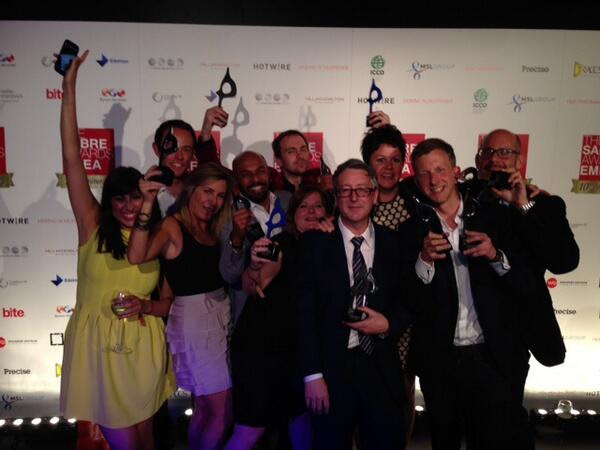 Memac Ogilvy Public Relations, the Middle Eastern operation of Ogilvy PR, enjoys an unprecedented evening of success at the tenth annual EMEA region SABRE Awards on May 20, having received the Platinum Best in Show Award and the Best Middle East Campaign for Grohe’s “Green Mosque” campaign, as well as the Best Public Education Campaign with the King Khalid Foundation.

During the ceremony, Ogilvy PR celebrated another fantastic night, with 11 award wins, more than any other agency network in the EMEA region. Key wins included the overall Pan-EMEA Consultancy of the Year Diamond Award and the Platinum Best in Show Award – the first time both of these trophies have gone to the same agency.

“Ogilvy PR was officially named The Holmes Report Pan-EMEA Consultancy of the Year 2014 during this year’s SABRE Awards,” says Saada Hamad, group PR director at Memac Ogilvy MENA. “These awards are not possible without our clients that trust us with creative freedom. These awards are also a great recognition for the efforts of our teams across the region; they have my thanks and respect.”

The Grohe Green Mosque project is a water conservation CSR initiative, which was developed as part of Grohe’s water conservation program to reverse the effects of irresponsible water practices in the region. The Sharbatly Mosque in Jeddah witnessed an approximate 30 percent reduction in water consumption after Grohe’s sustainable water solutions were fitted in ablution rooms. To date, the Green Mosque initiative has been rolled out in the UAE, Syria, Saudi Arabia and Egypt.

Meanwhile, domestic abuse is a taboo topic in Saudi Arabia and, for many years, non-governmental organizations and advocates have worked relentlessly to address this issue via policies in order to protect victims. Memac Ogilvy collaborated with the King Khalid Foundation, a non-profit organization, to support the actions of advocates involved in shedding light on the dilemma and help accelerate action.