Microsoft has unveiled a revamped homepage for MSN in the UAE today. 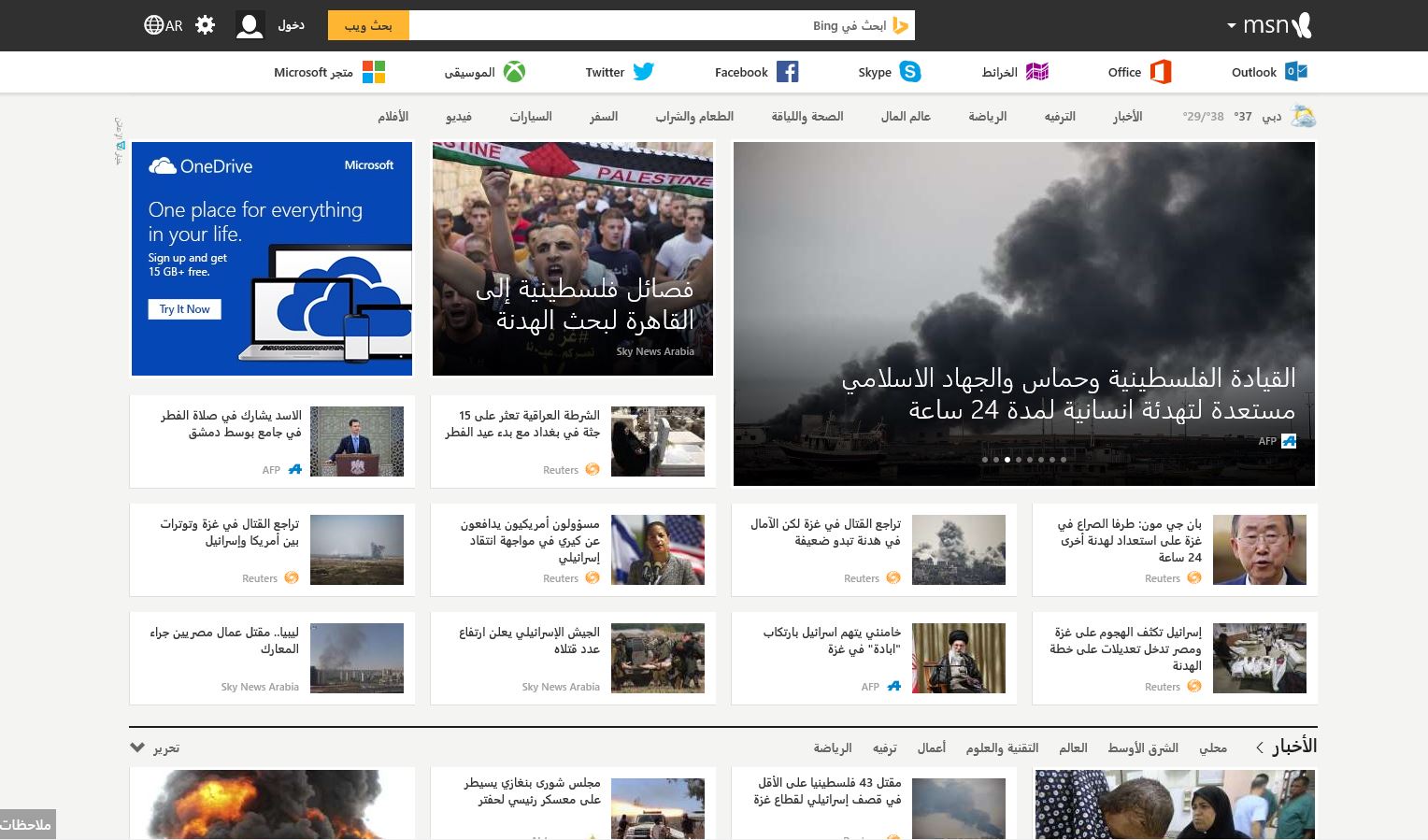 Microsoft has unveiled a revamped homepage for MSN in the UAE today, “designed from the ground up for a mobile, cloud-first world,” and combining “premium content from the world’s leading media outlets with personal productivity tools that help you do more,” it said in a statement. “Clearly, audiences are part of a cloud-first mobile first world. MSN, traditionally, has been a browser-based experience. But we wanted to look at carefully thinking about how to provide a fully integrated experience, not just across websites, but also across apps. We’ve been running a number of big apps globally and across the region. We wanted to reimagine and redesign MSN from the ground up,” says  Justin Dewhirst, regional executive producer for Microsoft’s information and content experiences group in growth markets in the EMEA (Europe, Middle East and Africa) region. ” Asked about the timing of the MSN homepage relaunch – and the delay at that – Dewhirst says: “this is a huge piece of work. We’ve had to redesign completely the entire platform. [Bringing the app and browser experiences] has certainly been something that we’ve put a lot of time and effort and time into.”

The revamped MSN experience is currently available on the web, and soon on Windows, iOS and Android. The current beta phase of the homepage can be viewed at preview.msn.com. The first step in the beta launch is the Arabic and English versions for the region, but with more of a focus on the UAE at this stage, explains Dewhirst, “and as we develop the beta version over the next few weeks, we’ll increasingly hone a more localized version for both the Saudi and Egypt markets”. He adds: “we have over 450 million users around the world, and the beta version is initially addressing those existing users, and giving them the opportunity to jump in and enjoy the preview. But there’s also a whole new audience opportunity; currently, the app is available on the Windows8 platform, but will also be rolled out on iOS and Android.”

MSN is partnering with the New York Times and Motor Trend in the US, The Yomiuri Shimbun and The Asahi Shimbun in Japan, the Guardian and the Telegraph in the UK, NDTV and Hindustan Times in India, Le Figaro and Le Monde in France, and Lance and Estadão in Brazil, among others. Regionally — and particularly in the UAE — Microsoft has signed on to partnerships with CNN Arabic; Layalina; ArabsTurbo; Sky News Arabia; Aljazeera; Fatafeat, a brand of Discovery Networks;  Eva Halasa Rihani; Drive Arabia;  Manal Alalem; Arabian Business;   Time Out Dubai;; Ahlan!;  Ahlan! Masala; Construction Week; Channel Middle East; Altibbi and Webteb. Microsoft has also partnered with SyndiGate, a platform for syndicated news, editorial articles, photographs and video from over one hundred publishers and content providers in the Middle East and North Africa today. “So, although we have, globally, over a 1,000 partnerships with content providers, here in the UAE, we have over a dozen local partners. We’ve also made it a point to partner with digital-only or digital-first platforms, such as DriveArabia,” says Dewhirst.

“CNN is the world’s leading news video brand and getting that video in front of as many people as possible is of paramount importance to us,” said in the statement KC Estenson, general manager and senior VP of CNN Digital, adding: “We think partnering with Microsoft to distribute CNN’s premium, made-for-digital news video across their platforms will put CNN in front of an even bigger audience than we have today.”

Mark Gatty Saunt, director of content sales and licensing at SyndiGate, added: “SyndiGate is dedicated to enlightening and inspiring audiences with authoritative, differentiated and trusted content. And we are hugely proud to have been selected by Microsoft as a major content partner for aggregated news, editorial articles, photographs and video content, focused on or about the Middle East and its surrounding regions.”

The new MSN features personal productivity tools like shopping lists, flight status and savings calculators, as well as integrated access to popular sites like Outlook.com, Office365, Facebook, Twitter, OneNote, OneDrive, and soon, Skype. At the top of the page, there is a personal stripe allowing users one-click access to their top services. “When you’re searching for recipes and find one that you want to prepare, in one click you can convert the ingredients into a shopping list which will roam from the web to the mobile apps so you have it when you need it in the grocery store not on the printer at work,” explains the statement. “We’re addressing this combination of digital life and digital work,” explains Dewhirst.

Users can organize categories and interests, and in the coming months, MSN will release a suite of apps across Windows Phone, iOS and Android. “You only need to set your preferences once, and your favorite stuff will always be there. In the finance section for instance, when you setup your stock watch list (i.e.. DIS) it will show up the same way on the corresponding apps and website. If you prefer to get your content from a specific source, you can set that as a preference (i.e. more stories from New York Times.),” adds the statement.

“Connect Ads and Microsoft have enjoyed a successful twelve year partnership and we are confident in this new transformational change to MSN. By combining comprehensive content from the world’s leading media outlets with powerful productivity and personalization tools, Microsoft are providing a web experience that allows consumers to do more from a single platform, but also more meaningful engagement opportunities for brands and advertisers to be reaching their target audiences across various mindsets,” said in the statement Mohamed El Mehairy, managing director at Connect Ads. Brands will still be able to purchase similar IAB standard units available on previous versions of MSN. Dewhirst says: “from a display perspective, there are all the standard ad tools that you would expect from a standard IAB [Interactive Advertising Bureau]. But in addition to that, we’re also looking at new banner opportunities; the fact that it’s a multi-screen, multi-device experience – including location-based activities – opens up new native and ad opportunities.”