The Adman Strikes Back
Insights Culture
Back

The Adman Strikes Back

Ahmad Abu Zannad, Regional Strategy Director at Leo Burnett MENA, releases “Adman vs Chomsky,” a new book in which he tackles Noam Chomsky’s assertion that the prime task of the advertising industry is “ensuring that uninformed consumers make irrational choices.” 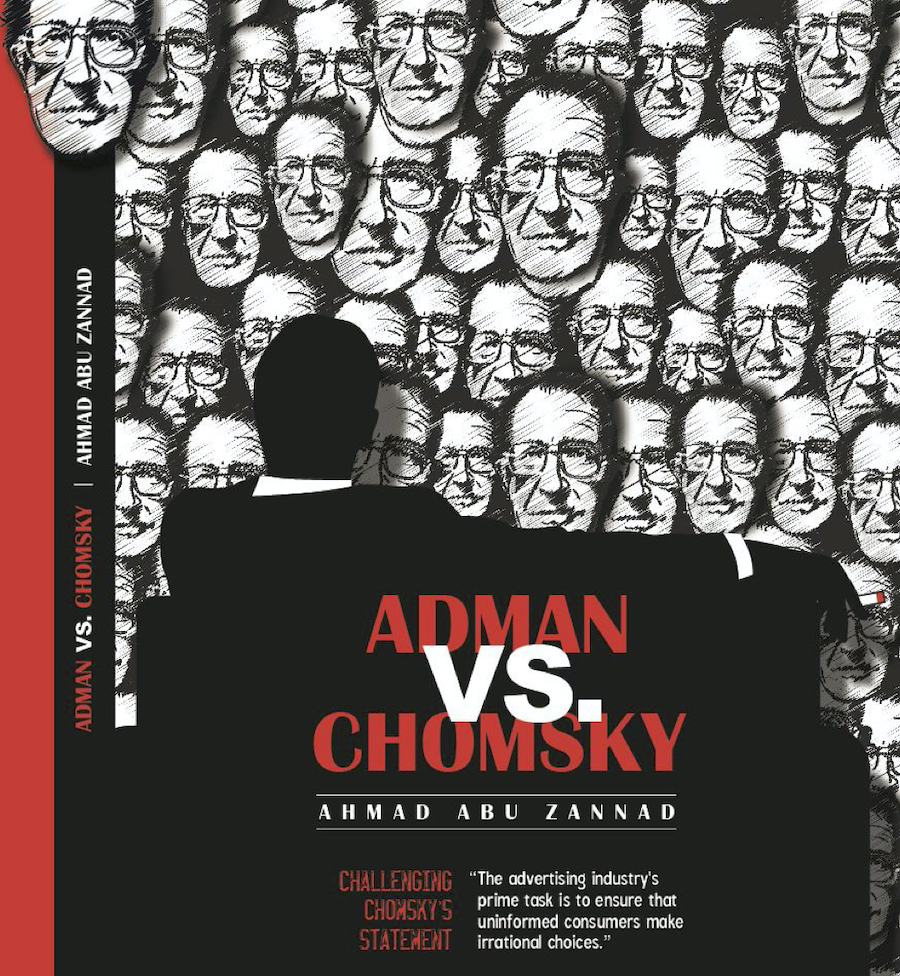 Ahmad Abu Zannad, Regional Strategy Director at Leo Burnett MENA, releases “Adman vs Chomsky,” a new book in which he tackles Noam Chomsky’s assertion that the prime task of the advertising industry is “ensuring that uninformed consumers make irrational choices.” He tells Communicate why taking on one of his favorite intellectuals meant so much to him. 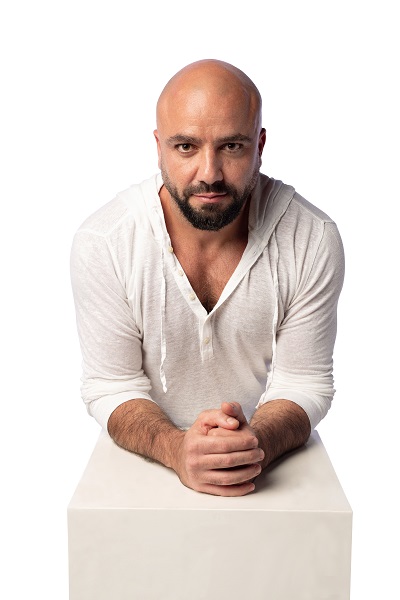 How long have you been working on this book?

I first got the idea around four years ago. Yet, it wouldn’t be fair to say that I have been working on it for exactly this long. It was a lot of ons and offs, cycles of self-doubt, busy schedules, and distractions. I mean, I am going up against the most intellectual human being alive, ain’t I?

How did you approach your “dissection” of Chomsky’s argument?

Firstly, as an avid reader of Chomsky myself, I tried as much as possible to use his style of writing. Meaning that I needed to back my arguments up with as many references, case studies and scientific evidence as possible. Hence, it has taken me this long! At the same time, I also believe I managed to keep it as a lighter read than what you would usually get from a Chomsky book.

Secondly, my dissection of the argument was to relook at its different elements, challenge them and offer a possible alternative when applicable.

Lastly, while Chomsky offered an oversimplified yet cynical definition of the prime task of the advertising industry, I attempted to use the arguments made throughout the book to offer a positive and constructive definition of our prime task as an industry.

You say that the ad industry has “lost its mystique” in the eye of its client. How did this happen, in your opinion? And why the antagonism from intellectuals in particular?

In Arabic, we have two proverbs that come to mind when I think of the current image challenges facing the ad industry: the first one references the carpenter with a dysfunctional door, and the second the barefoot shoemaker. As you can tell, both refer to the irony of professionals not applying their skillsets and craft to their own business. And that is what we have been facing as an industry. Our work helps build trusted and loved brands; yet, we have done little to build our own reputation. And the challenge comes from two fronts: the first is the business community (i.e. our clients, our holding companies and our talent) and the second is the intellectual/academic community.

For the business community, it has been apparent in recent years that anyone in business who is knowledgeable and up-to-date (or at least who thinks they are) with recent innovations and trends, is by default dissuaded away from the creative ad industry, and alternatively, is persuaded by tech platforms and content creators. In the first chapter of the book, I discuss how clients like P&G, Unilever, Pepsi, etc. are setting their plans in motion to offer less work to their creative agencies; how holding companies are no longer investing in their creative agencies as part of their pursuit to invest in their technological capabilities (even if some technologies have nothing to do with their business); and how talent is giving its back on the industry. In a nutshell, the creative ad agency is no longer the innovative business decision for clients, it is no longer the smart investment decision by holding companies, nor is it the right career choice by talent.

As for the intellectual community, the industry has become the common scapegoat for many of the world’s problems. Somewhere in arguments against manipulative media, advertising somehow fell, and from there, it has become the smarter and more sophisticated stand to hate on the industry – with little if absolutely no counterargument defending it.

And to answer why this has happened, from one end, there is the rise of possible alternative solutions coming from adjacent industries. Yet, the first shortcoming from the industry was the lack of a clear definition of our prime task and our differentiated added value in this new ecosystem. As an industry, we have been not only reactive, but doubtful of our ability to survive. Hence, we found ourselves wanting to be anything but our true selves. We throw claims like we have become a technology company or we have become consultants, while forgetting who we are – a damn creative agency, putting creativity at the heart of business solutions, while building iconic brands and long-lasting, mutually-profitable relationships between consumers and businesses.

Then, there is the issue of us shying away from engaging in what may seem like an intellectual debate around our prime task and the problems we may be causing.

What can the industry do to regain its credibility?

I offer the answer to this question in my last chapter. We need to be true to ourselves and attempt to define our prime task ourselves, not leave it to outsiders. Such a definition may be an aspiration, an ideal that we may not reach any time soon; yet, at least it gives us a north start to aspire to reach. Then, we need to use our skillsets and craft to make this ideal definition clear and relevant to clients, holding companies, talent, and the intellectual community.

What part(s) of Chomsky’s argument do you agree with and which part(s) do you want to prove wrong?

It was interesting that, as I ventured into this, I found that much of what Chomsky stated was in fact true. Yet, the overall premise of it was extreme. If I may go back to the statement “The advertising industry’s prime task is to ensure that uninformed consumers make irrational choices,” the reality is that there are a lot of external factors causing consumers to remain “uninformed” and make “irrational choices.”  The book borrows from several scholars from the fields of economics, behavioral economics, psychology, and evolutionary psychology, to make arguments around the realities of the marketplace (which are keeping consumers uninformed) and human nature (specifically, our innate nature to make irrational choices), proving that the approaches and tactics adopted by the industry are only catering to existing realities and are not actually causing them. Therefore, while the facts show that we do live in a market full of uninformed consumers making irrational choices, it is in no way the prime task of the entire industry. So, while I do agree with the facts in Chomsky’s statement, I strongly disagree with turning them into this extremely cynical and generic definition of an entire industry.

The second point I disagree with is in the follow-up to the statement, where Chomsky states “thus undermining market theories that are based on just the opposite.” In here, I make the case that such market theories have proven their inapplicability regardless of advertising. If anything, I make the point that advertising has salvaged our economies from the potential demise caused by the inapplicability of these very same theories.

Do you ever lose faith in the ad industry and if so, why and what do you do to regain it?

I could never lose faith in the power of 1. human insight, and 2. the creativity it inspires. Only such insightful creativity can trigger people’s emotions to feel unwavering love and trust in something they are uninformed about. Nothing will ever replace these two facts about our industry.

As for what I am willing to do to help regain faith in our industry, well, I hope this book is a good starting point.

Your book’s cover image is a clear reference to Mad Men, a show that portrays the ad industry in a bittersweet way. Why did you choose this visual?

Firstly, I need to give a shout-out to my good friend who designed the cover, George Maktabi, the COO of Publicis Communications KSA and a naturally born artist.

As you can see, the book is titled “Adman vs. Chomsky.” Accordingly, I looked for the one icon that represents the “adman,” and that is Don Draper. From there, the rest is Maktabi’s magic!

As for the show’s portrayal of the industry, I think of it as more of a drama around the characters and that era, and less about the work. It is unfortunate that other industries like law and medicine got shows that are more about the profession with cases written by industry practitioners, while our industry only got a show that is more about its protagonist’s personal life.

And, of course, what did Chomsky reply to you?

It was beyond my wildest dreams to get a personal reaction from the man himself, Dr. Noam Chomsky. Oh! Have I mentioned that he is by far the most intellectual human being alive!? And, fortunately, I got an instant reaction. Yes, he defended his argument. Yet, he also agreed that to define the same statement as the “prime task” was, using Chomsky’s own words, “partially controversial.”  And that is exactly the point I was trying to make in the book.