Tuning in
Insights Industry
Back 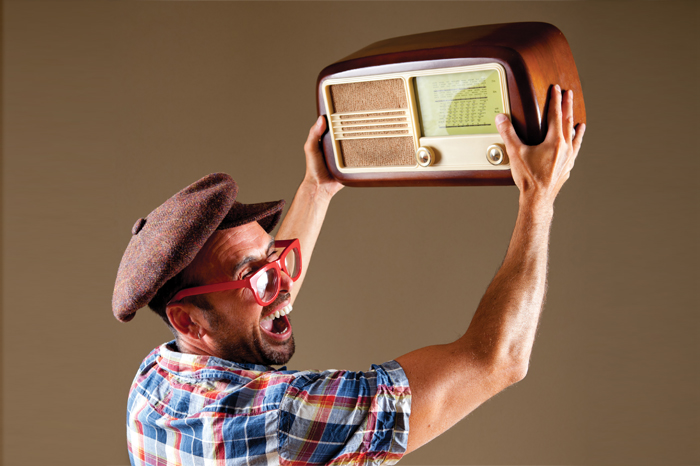 Radio is the best-equipped media to face the changes induced by the digital revolution.

Radio was the first mass communication tool created by man and it’s also the media least affected by technological changes. First developed in 1893 and having reached its heydays in the 1920s, radio could have been heavily affected by the invention and subsequent democratization of television in the 1960s. In fact, at the time, the misconception was that the emergence of this “sound and image” device would kill it. Still, radio’s redesign and transformation from a huge, bulky device to a mobile one, following the invention of the transistor in the 1970s, not only saved it, but even turned it into a must-have item. While, at the time, the invention of TV put the radio industry at risk, the Internet forced all traditional media to shift their strategies and introduce online and digital approaches into their operations.

STRONG ENOUGH. Najy Cherabieh, Virgin Radio Lebanon’s (VRL) general manager, says: “As per a BBC report, radio is the only medium that hasn’t changed over the years; it wasn’t affected by the technology wave and will probably survive several more years as [it is].”

Roger Saad, CEO of Mix FM, also says that, although the market is much tougher today when compared with the time when his station was established in 1996 – back then, only few people in Lebanon had cable TV, the Internet, mobile phones and so on; there were no such things as Facebook, Twitter, Instagram, YouTube and online radios, and the main entertainment media were radio and local TV – “through hard work, creative ideas, good radio content and music, we are being able to do it. Radio is still very much a popular medium in Lebanon and people believe in it and follow its activities on air and online,” he explains.

“Some analysts say radio is dying because of digital audio stream methods. However, in reality, it is only the method of distribution that’s evolving; instead of listening to the radio through the middle wave, FM, or short wave, we can listen to it through stream. In fact, the core of this local media, which is being a companion, will remain its strength and its way to survive,” adds Abdo Kahale, station manager of Radio One, who says that, in the US and Europe, traditional radio stations will stop broadcasting on the FM by 2020 and will, instead, stream via the Internet. Lebanon is probably far from such a move, but according to Kahale’s web metrics, a high percentage of people in Lebanon already listens to radio on their phones. Despite the high cost of radio streaming on mobile by the country’s operators, be it on 3G or 4G services, Radio One plans to launch 12 to 18 streaming channels within three to five years, each specialized in a type of music, based on the segmentation of the audience. “For legal and technological purposes, the studios of this project will be based in London,” says Kahale.

Clearly less enthusiastic, at least about the short run, managing partner at Light FM, Karim Mansour, says, even though online streaming makes it possible to listen to any international radio station at any time of the day, it isn’t yet a part of Lebanese people’s habits. “Huge traffic jams in Lebanon make radio a pretty solid media compared to others, especially print, which was severely affected in the past years by a change in people’s media consumption,” he adds.

“The Internet is a challenge, but as long as there will be traffic jams, people will need something to entertain them. And everything that’s local has a bigger advantage than international brands,” he says. In such a context, “the nearest and biggest change will happen when the Internet becomes accessible from inside cars – something already done by luxury automotive brands – and people are able to listen to whatever they want to listen to. We will be using the infrastructure of mobile operators to be able to reach our listeners. Then, local stations will have to ensure that their content is good enough to build listeners’ loyalty. This is a challenge similar to what local TV stations are facing today; so far, they are surviving against international channels,” he says.

GENERAL RULES. Today, more than 30 radio stations operate in Lebanon, classified as per the 1996 Lebanese broadcasting law into two categories: category A allows a radio station to tackle politics and religion, and category B allows it to deliver strictly entertaining content (the latter category is divided into Arabic-language and foreign-language stations).

As per the Radiometry Lebanon 2013 survey conducted by Ipsos Lebanon on a national representative sample of 2,500 adults aged 15+, more than 75 percent of the Lebanese population listens daily to at least one radio station for at least five minutes. The same research shows that the general broadcast listenership reaches 44.2 percent, whereas music radios listenership reaches 45.9 percent for Arabic content stations, and 29.2 percent for foreign-language stations. Severe competition between industry players – especially those belonging to category B – challenges them to keep finding new formulas to differentiate themselves from others. “The mission of every radio is to communicate, educate and entertain listeners, and each radio station is different by the content it provides,” says Kahale.

Aside from numerous local players, global names joined the fray not too long ago, such as VRL that launched in May 2013 after three and a half years of preparation to enter the market. “VRL has a vision to reposition radio stations in Lebanon so they don’t compete against each other, because there is actually room for everyone and each station can target a different segment of listeners,” says Cherabieh.  Unlike radio stations, such as NRJ, that bring in an international brand but are owned and operated locally, the team in Lebanon and Virgin International fully and jointly manage VRL. That’s not to say that an international brand isn’t a strong selling point, because it is. “The Virgin brand is probably one of the most recognizable logos in the world; the name actually sells itself, which was a perfect kick start for Virgin Radio in Lebanon,” says Cherabieh, who stresses, however, on the fact that establishing a well-known brand isn’t as easy as it might seem.

“The Lebanese market is saturated with good radio stations, which made it a challenging ground for Virgin Radio,” he explains. “Lebanese people are sophisticated; they are into music and art and it’s impossible to fool them. Thus, the success of a radio station goes beyond the music it plays and the content of the programs it delivers. It is all about the relation it builds with listeners, especially through broadcasters that are the face of every station,” says Kahale. More than any other media, radio is a local medium that must engage with the local audience; its content should be, first of all, relevant to the local culture, a challenge that every foreign-language radio station faces in Lebanon, especially at foreign presenters’ level. “Our main concern is to make a broadcaster understand the Lebanese culture and humor, and speak the international English language that everybody understands,” says Kahale.

DRIVING FORCE. According to Kahale and a 2012  Ipsos study, seven to nine percent of the $180 million Lebanese ad spend went to radio, while 35 percent to 40 percent was allocated to TV, 20 percent to print, another 20 to outdoor, and a slight percentage to digital media.

These figures puzzle some of the radio industry players, such as VRL’s Cherabieh. He questions the logic behind clients’ sustained and massive spend on outdoor and TV, whereas numbers show that people increasingly spend time on their mobile devices and listening to the radio. To shift from outdoor and TV to radio and social media advertising could potentially multiply clients’ reach, he says.

Lebanon’s peculiar political concerns also contribute to the difficult media landscape. According to Kahale, revenues would multiply by seven with just double overheads if his station were to move from Lebanon to Dubai, the two markets having comparable media market structures. “Due to the unstable security situation in Lebanon, we barely make profits and sometimes we just manage to slightly avoid losses,” he says. “One of the first media that gets affected when there is a security issue is radio, because radio advertisers are mostly companies selling entertainment products and services,” says Cherabieh.

In addition to advertising, some of the Lebanese radio stations seek other commercial opportunities that help them generate revenues, such as events, concerts, local parties and projects for agencies and private clients.

However, this new line of business comes with its own set of challenges. Firstly, stations are legally bound to create an event management company that would handle such activities. For example, Mix Productions is Mix FM’s event management sister company, both operating under the mother brand, Mix. Secondly, if events can sometimes bring in some additional revenues to radio stations, “they can also sometimes cause losses,” says Kahale, who, like most other industry players, says advertising remains the main source of income for radio stations in Lebanon.

GOING SOCIAL. Aware of the transformation their industry is undergoing, an increasing number of stations are now including social media in their advertising packages, not just as a way to attract more advertisers, but also because there’s simply no way around it anymore. Cherabieh believes social media was a key part of the success of VRL. “No matter how many negative comments we heard from the start about us spamming and bombarding our fans with posts, we decided internally that social media is a media by itself and it is the perfect marketing tool to promote a radio statio, rather than spending millions on the traditional ways of advertising. Now, we’re 11 months old and our Facebook page is ranked the tenth most visited page worldwide across all categories, and first in the world in the media category,” says Cherabieh.

As Light FM’s Mansour explains: “Today, working on online and social media is just an investment with no revenues, but we are willingly investing in it, knowing that online streaming is the future of radio. We haven’t found a formula yet to monetize our online presence and the revenue from usual banners are minimal when compared with the on-air revenue we make. This is what I believe is our next challenge.”