More than half consider local celebrities more relevant than international ones, with KSA residents showing greater affinity towards them.

It is common to see brands roll out global campaigns to promote their products and services. While some brands like to localize their campaigns, many ride on a powerful brand name or a global celebrity to create an impact.

YouGov’s latest survey shows more than half of UAE and KSA residents (55%) agree with the statement “Global brand campaigns create relevant content that resonates with my life locally.” An additional 52% believe campaigns run by global brands speak to issues that are relevant to their local lifestyle.

Young adults between 25-34 years in both countries are more likely to hold a positive view of global brand campaigns (at 63%) as compared to the other age groups.

Even though there is resonance with global campaigns, data suggests there is a need for localizing the content to create impact. Almost as many of those who feel global campaigns resonate with them also said content created locally is more impactful to them than international content (54%). Once again, we see a higher agreement among those aged 25-34 than the other age groups (at 59%). The same is true for high-income individuals, earning $2,666+ (60%) and working individuals (58%). 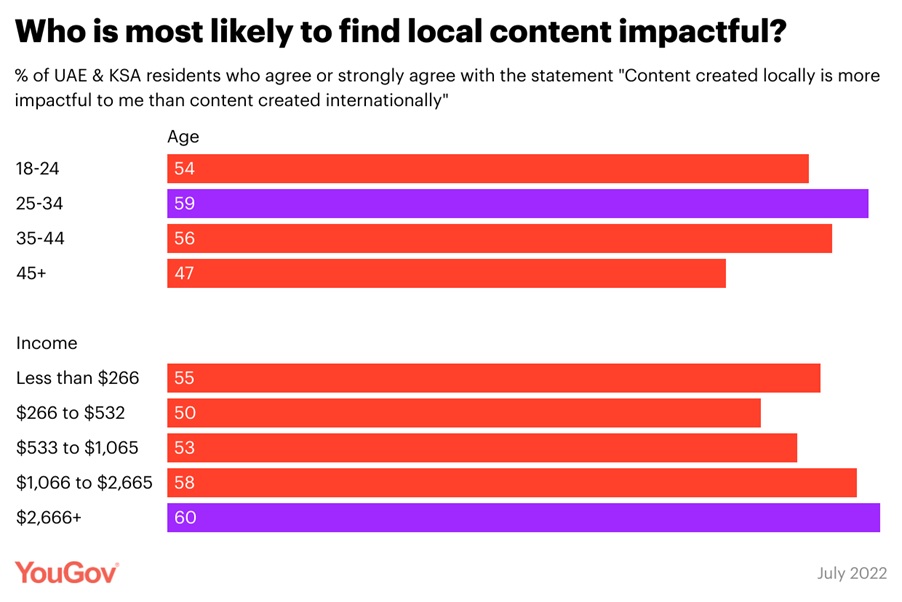 In the UAE, Emiratis are more likely than people of other nationalities to say they find local content more impactful (63% Emiratis vs 54% ex-pats), while in KSA both Saudis and ex-pats are equally likely to hold this view (54% Saudis vs 53% ex-pats).

Celebrity endorsement can play a role in bridging the gap between local and global, however, the level of influence varies according to geography. In general, local celebrities resonate better across the region with 52% of residents in UAE and KSA agreeing, “Local celebrities are more relevant to them than international celebrities”. Furthermore, 49% in both countries tend to follow more local than global celebrities on social media.

The data suggests that celebrity endorsements have different values in different markets and understanding nuances is imperative for a successful brand campaign. YouGov RealTime Omnibus is a useful tool to understand fit and engagement with potential ambassadors or influencers. To know more, click here.

Data was collected online among 2001 adult respondents in the UAE and KSA by YouGov’s Omnibus between July 21 and 28, 2022 using YouGov’s panel of over 20 million people worldwide.