Apple announced on Tuesday that it will start selling a lower-end, less costly version of the iPhone in an effort to find new markets in the U.S. and abroad where the Android mobile ecosystem has become dominant.

The new, cheaper phone will not have all the features of the newly-announced iPhone 5S and will be priced at $99 for the 16 gigabyte (GB) version with a two-year mobile carrier contract, half the cost the high-end model.

For any other tech company, releasing a cheaper, lower quality smartphone would be unremarkable, but for Apple it marks a shift from constantly improving, not lessening, the iPhone’s quality and getting consumers to pony up for each new iteration. In the past Apple has offered old iPhones at $99 or free with a two-year contract.

It’s a strategy it executed well with the iPod, which had many variants at a wide range of price points and the iPad, which has a smaller, cheaper model, the Mini.

Samsung, for example, sells 136 variants of its smart phone in myriad colors, carriers and sizes, and has more than doubled its market share since October 2011, going from 15% then to 34% in July 2013, according to the NPD group. Apple’s increased to 42% from 35% over that same time period.

Worldwide, Samsung’s market share is larger than Apple’s. Samsung accounted for 30.4% of smartphone devices sold worldwide in the second quarter this year. Apple was a distant second with a 13.1% share of shipments.

Foreign consumers will be a particular point of emphasis for the 5C. Consensus is that as the high-end smartphone market in Western countries becomes saturated, emerging markets — Southeast Asia, specifically — offer smartphone companies the most growth potential. As such, the 5C will be the first iPhone available in China at the same time it launches in the U.S., Apple’s senior VP-worldwide marketing Phil Schiller said at the product unveiling.

Apple has “gotta come out swinging” when it comes to marketing the 5C against Android devices in emerging markets, according to IDC’s research manager for mobile Ramon Llamas. “If you’re at an emerging market where the mid-range, lower end of the market is flooded with Android [devices], I think that’s where you spend a little bit more time and effort to evangelize.”

Apple also announced the iPhone 5S, an improvement on the existing iPhone 5. The phone has a host of new features including a better camera, sensors that allow owners to track their physical activity levels and iOS 7, the latest version of Apple’s new mobile operating system.

Releasing a new high-end iPhone comes amid consensus that U.S. consumers are less willing to upgrade to new phones than in past years. BlackBerry, HTC and Samsung all released new flagships smartphone this year to disappointing sales. Motorola released a new smartphone that was more design than tech focused, specifically citing smartphone fatigue as one of the reasons for the strategy. 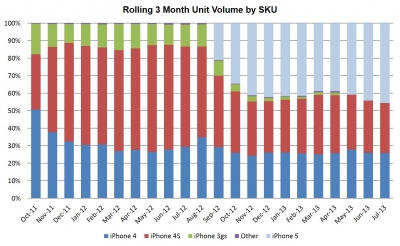 Apple has always been successful at getting its faithful to buy each new iPhone, so much so that competing brands have mocked Apple fanboys’ willingness to camp out for even the most incremental of improvements.

The iPhone 5 became Apple’s best-selling iPhone just weeks after it was unveiled last September, according to the NPD group.

But Apple also successfully sold the older iPhone 4 and 4S while the 5 was on the market, suggesting that the company’s new “high-low” strategy may be viable in the U.S. But will it come at the expense of Apple’s perception as the tech company that never settles for anything second-rate?