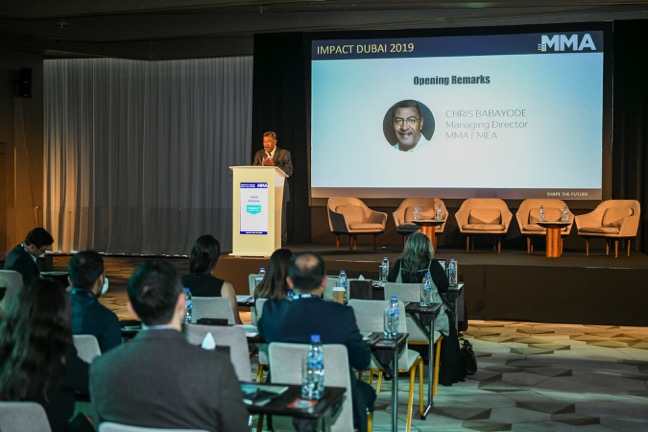 Pertinent topics such as mobile advertising, digital publishing and influencer marketer were discussed and further analyzed during the Mobile Marketing Association’s annual Impact Forum in Dubai. The forum brought in thought leaders working in-house  at global and regional companies to discuss the transformation of business through mobile.

Among the speakers was Emre Tok, Vice President of Customer Growth, Experience, Digital & Performance Marketing at Careem, who shared how advanced technologies have helped his team grow their reach.

“Careem is dedicated to mobile marketing and heavily invests in core technologies. We have a team of data scientists using cutting-edge machine learning and Artificial Intelligence programs to power our marketing to ensure optimum levels,”  Tok told his audience.

He explained that through the use of prediction and forecasting models, they can define the optimal times and communication content, and with “tailormade value propositions for our customers we are able to drive a 360 marketing campaign with experience driven growth, both online within our app as well as providing a quality service though our Captains.”

The Careem app’s user interface has evolved over the years, building on its CSR partnerships with UNHCR by allowing passengers to collect rewards that can be redeemed for credit to be used for future rides or donated to charitable causes.

The Careem app’s user interface has evolved over the years, building on its CSR partnerships with UNHCR by allowing passengers to collect rewards that can be redeemed for credit to be used for future rides or donated to charitable causes.

Since its 2012 launch, Careem has gained roughly 30 million passengers in 15 regional countries, often employing partnerships to offer promo codes to and from events such as the 2019 MMA Forum itself.

The importance of conducting more transactions on mobile devices was also discussed in another panel, in which Facebook Head of Agencies MENA Ian Manning stated offline retail still dominates in the region.

TELLING A STORY THROUGH MOBILE

Dubai-based Iraqi actor, director and comedian Lowi Sahi shared his journey and explained how brands can best approach the topic of Influencer Marketing. Sahi, who is Director of Sahi Media Production, prefaced his statements by defining himself as a ‘content creator’ rather than an influencer.

“Today we are assimilated to billboards and people dislike how creators are over-selling branded content to the world, but let’s not confuse influencers with content creators. I believe that in each industry you will have affordable and premium goods or services. It all depends on what value it brings to human beings,” said Sahi.

He also shared the back story of how he began creating videos for YouTube in an effort to share Dubai’s sights and sounds with a terminally ill girl in his native Iraq named Zahra who was unable to travel to the UAE herself. The video going viral encouraged Sahi to keep telling impactful stories through videos, as he explained in a “Creators Journeys” video published by YouTube.

“There is no influence without a content creator, no income for a creator without a brand, no easy bridge between them without a talent agency and no correct KPI without analytics,” he told the crowd during the conference.

He added that everyone should remember that content is the number one priority for everyone. “If there is no true and well-told story, there is no audience,” said Sahi.

The distinction between “influencer” and “content creator” was important to make, given the sometimes negative reputation garnered by influencers. Measures by the UAE government have been taken, such as the implementation of an e-media license in 2018 by the National Media Council that was intended to regulate the country’s booming influencer activities. As previously discussed in Communicate, establishments such as restaurants and hotels have gone the length of banning influencers after previous negative experiences with them.