Trio students at Middlesex University achieved winnings in both the Masar Student Creative Award for Print Competition, and the Student Integrated Award Competition at the annual Dubai Lynx Festival.

Communicate will be publishing a three parts interview with them.

The Second interview is with Divya Ariga, who designed a campaign to empower blue-collar labour in the UAE.

Divya Ariga designed a campaign called ‘Smartlife Talkies’ which was awarded first place in the Dubai Lynx Student Integrated Award. The campaign is aimed at enabling and empowering blue-collar men and women in the UAE. The strategy is to spark curiosity, inspire action and sustain attendance. “I designed the campaign around the theme o 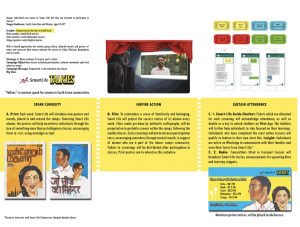 f cinema culture in South Asia,” she told us. According to Ariga, the campaign is rooted in the heritage, hence the title, Smart Life Talkies, is an ode to rural cinema practices.

Did you take this campaign to the ground?

No, this campaign was not tested on ground as it would have required the permission of numerous authorities; and as a student, I could not get access to the target demographic. Although, I do hope that this campaign is implemented in the near future, as I wholeheartedly believe that it will restore a sense of home to those who require comfort the most.

What exactly did your campaign achieve?

The campaign was designed to encourage Blue Collared workers to feel a sense of pride with their learnings. It aimed to harness the power of nostalgia and create a sense of belonging through a shared appreciation for cinema. The campaign, through its various mediums, aimed to normalise the process of undertaking English classes.

What are the learning lessons for advertisers and marketers?

The media industry, with the heavy burden it bears, needs to welcome and actively involve those who might not resemble that which can be viewed as the norm. Creativity is not exclusive, and it should not be considered to be a commodity belonging to the privileged some. The industry needs to desaturate itself and involve more individuals from different ethnicities and cultural backgrounds to thus continue to produce thought-provoking, insightful work.

Advertisers and marketers have the opportunity to reflect upon the beauty of their surroundings and populous. As evidenced by the award-winning campaigns produced by Impact BBDO Pakistan.

Diversity should simply not be our crutch. We must lean into the fringes, and give voice to the “weird”. As a young professional entering the media industry, I believe that we should pride our languages and cultures, as there is still so much to share and create.

Three Insights to Watch Out for During #RamadanOnTwitter
Procter & Gamble Makes The Biggest Ask: Civility