Social TV is VivaKi’s proprietary real time solution that allows us to discover the most trending TV content and topics. The product offers in-depth analysis on top performing shows in the social space, with detailed insights for brands to utilize.

Overall mentions across the top five ranking shows saw a significant spike as season finales capped the Holy Month of Ramadan. The last week rankings extended Bab El Hara’s tenure at the top position as viewers continued to engage with and against the show’s plot twists and turns, generating some 179,232 mentions. Followed Selfie in second place with 85,402 mentions, which stirred a particularly controversial conversation on how well it represented all Saudis. Celebrity prank show Ramez Wakel El Jaw stood solidly in the third position, with the episode starring Lebanese singer George Wassouf generating the biggest buzz across the season – 64,479 mentions, precisely. In fourth place, Khawater’s final season came to an emotional end as grateful viewers thanked the show’s presenter Ahmad Al Shughairi for 11 years of humanitarian activism. With 39,447 mentions, love story Cello ranked last, its finale sparking debate around the characters’ fates and choices. 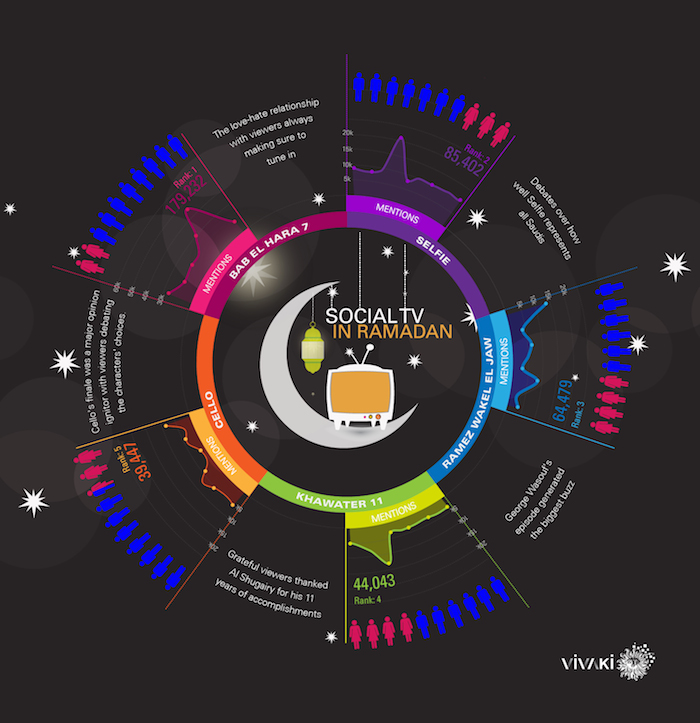 Social TV is VivaKi’s proprietary real time solution that allows us to discover the most trending TV content and topics. The product offers in-depth analysis on top performing shows in the social space, with detailed insights for brands to utilize. Now that the Ramadan 2015 TV schedule is in full swing, so are the conversations around this month’s shows. Top five rankings were significantly reshuffled this past week as the Holy Month of Ramadan comes to a close. Viewers’ love-hate relationship with Bab El Hara – and a very peculiar liking to the show’s theme song – drove the drama series to the top position this week with a huge spike in mentions, standing at 121,756. Ramez Wakel El Jaw remained in second place with 108, 181 mentions, a slight drop that followed media reports on international socialite Paris Hilton and potentially other celebrities being in on the plane crash pranks. Selfie slipped to the third position, albeit engaging users in the highly controversial debate on harassment against women. Followed Khawater, which stayed in the fourth position as viewers gradually come to terms with the ending of the show’s final season. Love story Cello returned to the top five rankings, coming in last with 19,529 mentions. View the update from the first week here and the second week here. 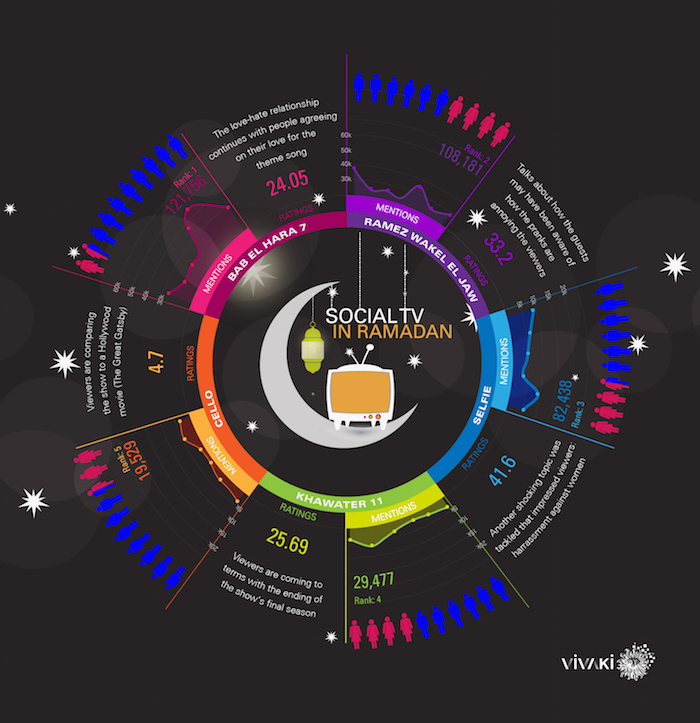 Social TV is VivaKi’s proprietary real time solution that allows us to discover the most trending TV content and topics. The product offers in-depth analysis on top performing shows in the social space, with detailed insights for brands to utilize. Now that the Ramadan 2015 TV schedule is in full swing, so are the conversations around this month’s shows.

With 1,55,465 mentions, Selfie maintained the top position for the second week, its consumer engagement and impactful messaging reaching its peak during an episode on religious sects. The Ramez Wakel El Jaw prank retained the second position, but witnessed a huge jump in overall mentions at 164,776 – surpassing Selfie’s – as it gained momentum over a prank played on worldwide socialite Paris Hilton; the airing of Hilton’s episode ensued a great deal of conversation and controversy around faking an imminent plane crash as a prank. Followed articles reporting that Hilton was threatening to sue Wakel El Jaw producers for emotional distress, generating even bigger buzz and publicity around the show. Bab El Hara’s seventh season sustained its love-hate relationship with the audience, while viewers relished in the last season of do-good reality show Khawater as it set to aid 12,000 refugee families. Cello, the love story of this Ramadan slid out of the top five rankings this week as Al Ahd, a multi-genre Arabic series came in fifth with 22,711 overall mentions. 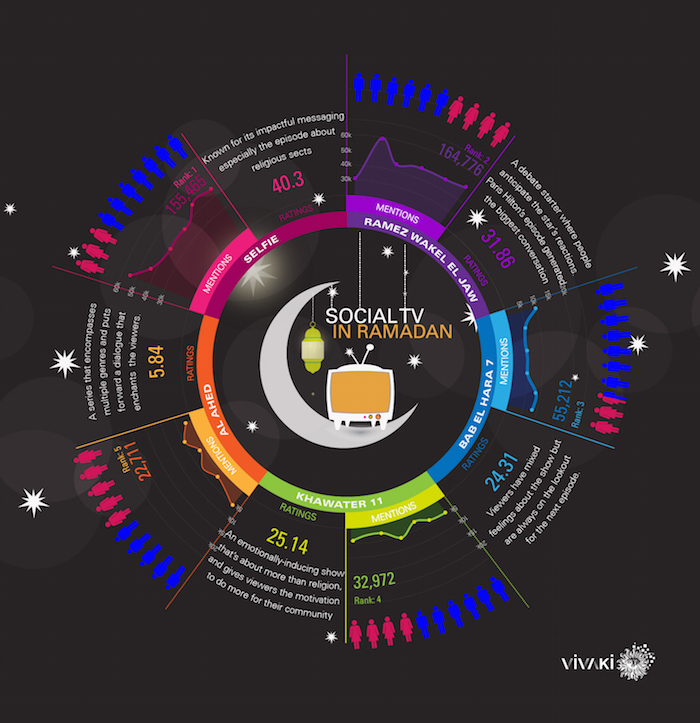 Social TV is VivaKi’s proprietary real time solution that allows us to discover the most trending TV content and topics. The product offers in-depth analysis on top performing shows in the social space, with detailed insights for brands to utilize. Now that the Ramadan 2015 TV schedule is in full swing, so are the conversations around this month’s shows.

Brands have long recognized the value of word of mouth and its powerful ability to influence and alter people’s behavior and choices. Adequately measuring its impact, however, has always been a challenge. Today, with the emergence of the ‘social living room’, consumer conversations surrounding TV programs are further amplified, providing marketers with an additional planning metric: social currency. In parallel, brands looking to sponsor, integrate, or explore messaging opportunities – and even those who don’t – need to actively listen, understand and analyze conversations. The reason for this is simple: we live in an ultra-connected world where content is floating and shared 24/7. The Middle East, in particular, is a region where there is certainly no shortage of content authors who are eager to engage, join and share. This presents several opportunities for brands to create more meaningful content, in real time, delivered at scale and in an agile manner.

First-week results highlight several shifts in social media conversations and interactions with prime-time Ramadan shows and series, as consumers increasingly move from reactive to proactive engagement. They are playing a larger part in the social living room, immersing themselves in content co-creation, critique and character-building for these shows. True to tradition, comedy, drama and humanitarian content garner the most buzz among consumers, who are actively and emotionally engaging in controversial debates and conversations generated by either the shows or the topics they tackle. 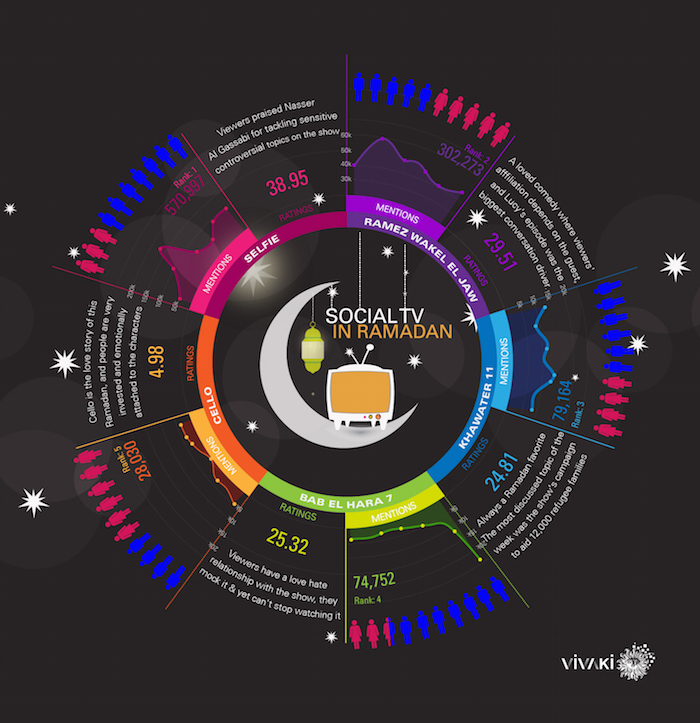 This Holy month, the Middle East’s top Ramadan TV series are garnering major buzz across social media platforms. As a result, marketers should be listening carefully to these revealing conversations. They should be analysing how strongly certain storylines or characters resonate amongst audiences in the sphere of social media. More importantly, they should be capitalizing on these critical findings to build agile marketing strategies, provide consumers with meaningful content in real-time and develop engaging touch point opportunities.

The truth is, in today’s digital world, marketers cannot afford to underestimate the power of Word to Mouth (WOM) and its ability to permeate, enhance or disrupt the overall brand experience. Measuring the effect of WOM is, therefore imperative. Thanks to the recent emergence of the ‘social living room’ – which now serves as a new planning metric and social currency for marketers – brands now have access to free-flowing TV-related chatter on social media; and, they are using this crucial data to help shape their approach to messaging and media planning.

This week, Social TV yet again provided vital information on the region’s TV viewers and their social media reactions to their favourite Ramadan series.

Social TV found that conversations centering on popular TV program Bab Al Hara have taken a rather political turn in the past few days. This occurred because the show’s cast members attended a political speech and, as a result, viewers expressed their opinions on this matter. Social TV data showed that audiences are still fascinated by Abu Essam’s character; his marriage to Nadia and the subtle changes in his personality are certainly being noticed by the show’s fans. The series was also heavily criticized as the details surrounding Abu Essam’s death proved to be historically inaccurate.

All in all, viewers seem to be quite taken by the ups and downs of the show and the non-stop intriguing cliffhangers.

When it comes to Khawater, the beloved series continues to amass positive feedback from viewers. Audiences remain affected by each episode’s teachings, however, most of them do feel that the show’s influence on people’s lives is short-lived as it won’t alter their attitude in the long run. The 15th episode, entitled It-harrak, was the most talked about this week.

As for Ramez Qirsh Al Bahr, the Dawood Hussein episode was the most watched and liked by viewers.

Finally, for Wifi, this week’s favorite episode was the one featuring Mustafa Al Agha; in it, he pokes fun at his own show on MBC (Sada Al Mala’eb).

Interestingly, and despite initial success, most Wifi viewers are starting to grow tired of the show – a common trend when it comes to comedy series.

Take a look back at the chatter in Week 1 and 2.

The power of social media continues to loom large over the Middle East’s television industry, especially throughout the Holy Month of Ramadan. We previously delved into the importance of leveraging social media chatter – surrounding the region’s top Ramadan TV programmes – to create agile marketing operations and deliver real-time, meaningful content to consumers. And, when Ramadan overlapped with the FIFA World Cup 2014 finals, this proved to be more relevant than ever.

After all, in this day and age, brands understand that measuring the true impact of Word of Mouth (WOM) is pivotal to the development of their brand messaging and media planning. They know that the region’s most-watched TV shows trigger constant, insightful social media buzz that should be explored, studied and listened to. Lastly, they recognize that the rise of the ‘social living room’ has brought forth a new planning metric – a social currency. That is precisely why brands are turning to Social TV, VivaKi’s real time proprietary tool, to tap into crucial data on today’s most trending TV topics and obtain invaluable consumer analysis.

In fact, thanks to Social TV, we found that, this past week, viewers across the region were struggling to divide their attention between their favourite Ramadan TV series and the World Cup 2014 matches. On days when high profile football matches were taking place, the volume of conversations around Ramadan shows decreased significantly. The programmes most affected by all the World Cup noise on social media were Wifi, Saray Abdeen and Bab el Hara.

Our Social TV findings also revealed that Bab el Hara still ranks number one in the eyes of consumers – many of whom are completely immersed in the story and comment on every move made by the main characters. For example, social media conversations peaked when the protagonist Khairiya first announced her pregnancy or when the beloved character Abu Issam returned to the series.

Viewers are so invested in the show that they no longer simply tackle current plot twists – they also spend time predicting future events or potential cliffhangers. As for Saray Abdeen, another top show, social media users generally discuss the characters’ spoken dialect; they are particularly fascinated by Yousra’s way of speaking.

Khawater remains a popular show amongst viewers and one that has, over the years, become deeply embedded within audiences’ Ramadan traditions. Similarly, from 6-10 June, Ramez Kirsh al Bahr received a large number of mentions (62,148) across social media platforms. This specific Ramadan genre garners strong interest as people typically love seeing celebrities getting pranked as this means they will show their true colors. Wifi is still a Ramadan fan-favorite; this week, the episode featuring Sami Al Jaber was the most talked-about on social media.