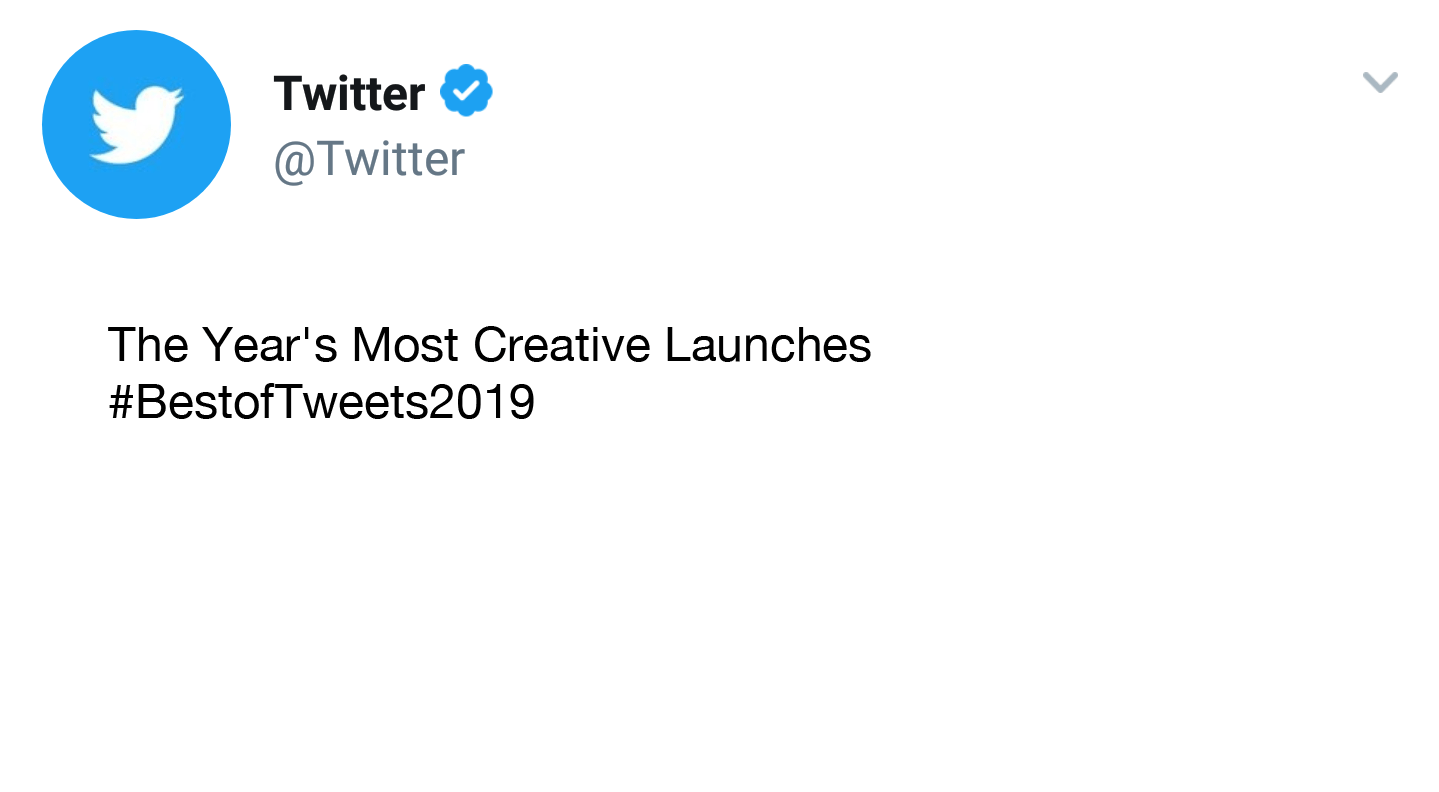 As the year comes to a close, we look back at the brands that made it on Twitter in 2019 based on a curated list from the Twitter Next team including a chat with Stephanie Terroir, head of Twitter Next, MENA, on the objectives and strategies behind these campaigns. 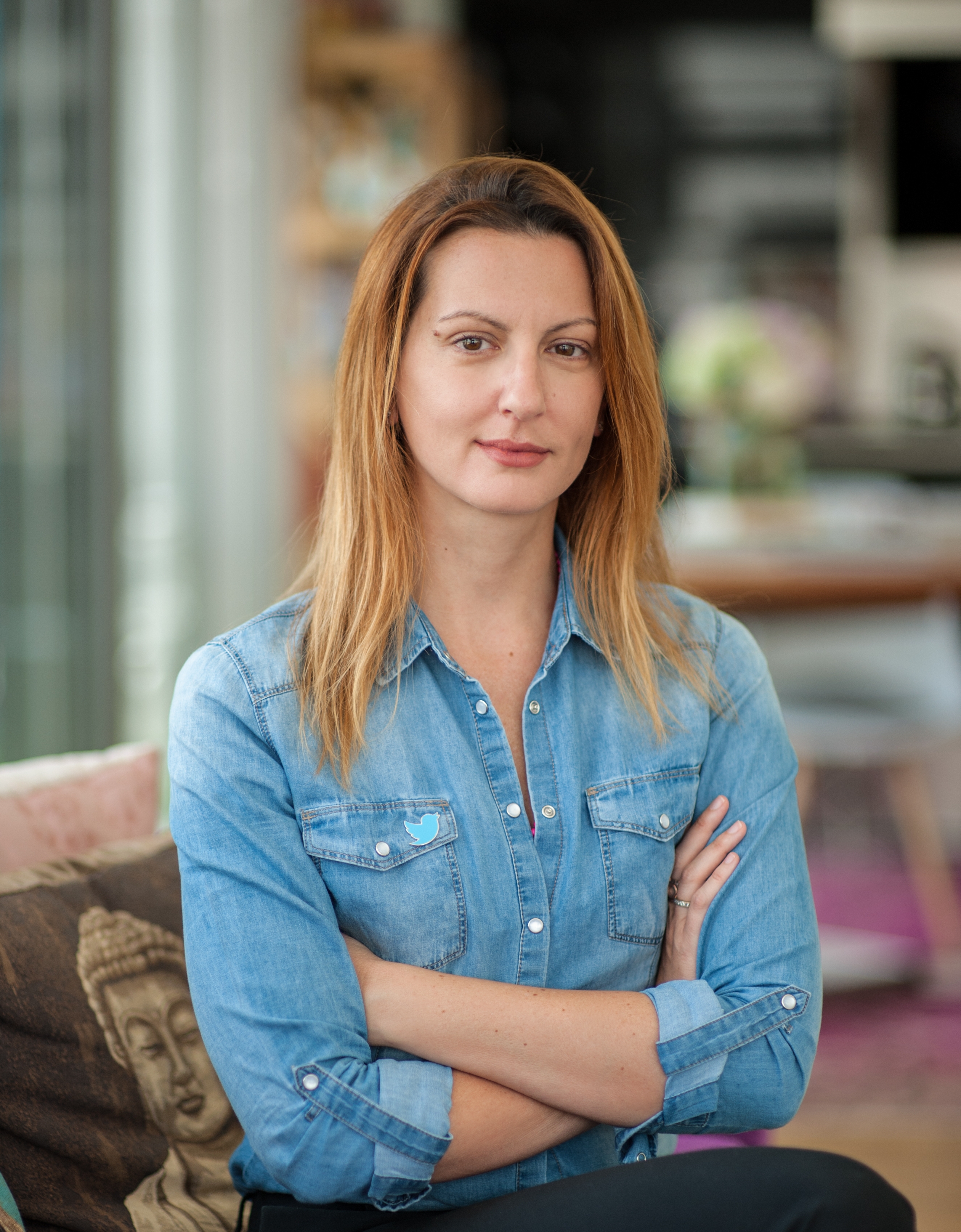 “At a time when it becomes even more critical to get the launch window right, successful brands know that Twitter is critical to maximizing their launch’s success because it drives meaningful incremental value. Leading brands start with Twitter’s audience because, based on recent research in the region, this is where people go to discover what’s new.” as stated by Terroir.

This title is given to a brand that took a stand and connected to culture in a genuine, authentic way when launching something new. 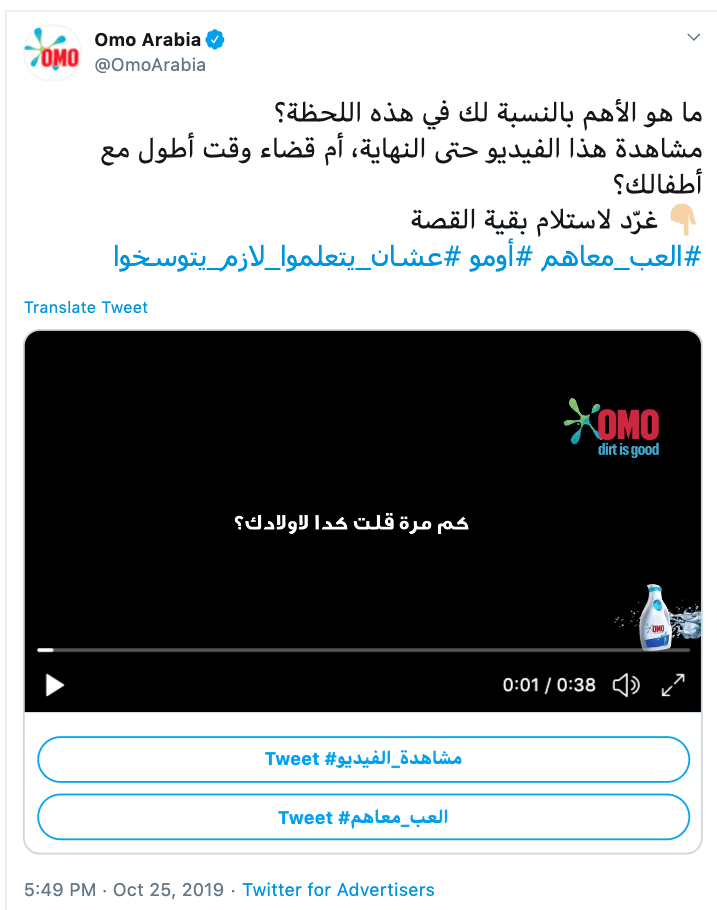 OMO decided to switch up the conversation and speak to the parents, with the aim of shedding light on the sensitive topic of overconnectivity. Using a conversational ad, the brand questioned its audience’s intent while viewing the ad: Did they want to continue watching the ad or did they prefer to stop and spend more time with their children?. Each selection triggered a corresponding response that was created through an auto-reply campaign (a solution to interact with audiences in real-time who have opted into a campaign), showing them a longer version of the creative, or a thank you message for the parents who chose to spend time with their kids instead.

What did you find most interesting about this campaign?

It’s really interesting because they came on Twitter to talk to the Twitter audience to take them offline and go play with their kids.

This title is given to a brand that creatively used Twitter as their primary media partner, to seize the moment and turn a conversation into a campaign.

Literature is popular in Saudi Arabia and ToyotaALJ wanted to utilize the art form in an innovative way. Teaming up with a Saudi community of writers, the brand created a series of unique short stories, tackling new genres such as mystery, noir, crime, and urban among others. These stories were published on a weekly basis on its Twitter handle to engage with the audience.

Since the stories were published on a weekly basis, how was the audience notified of its release?

The stories were published on a single thread. We created a custom feature for the campaign called ‘heart to subscribe’. Anyone who liked the tweet would receive the stories in their notification, every time a new story was released. Since this was not a native function, we worked with a third party to develop it.

What was the objective of this campaign?

The specialty of this campaign was that it was absolutely unbranded. At no point in time did they inject car brands, nameplates, none of that. Toyota just wanted to bring something new to the users and connect with them on topics that were interesting. That was the main objective, to connect.

This title is given to a brand that creatively leveraged Twitter to introduce a new product.

With the P30 launching, Huawei knew that being culturally relevant was key to winning the hearts of Saudis. As the unveiling event took place in Paris, Huawei broadcasted the launch live to the GCC using Twitter’s First View (the exclusive ownership of Twitter’s top ad slot in the timeline for a 24-hour period) and Promoted Trend ad formats. But to make it relevant, the event was broadcasted with an Arabic voice over, alongside simultaneous tweets of key highlights and quotes for viewers. As the brand continued to keep viewers engaged, more people started to join and engage, asking questions about the device and clarifying details of the launch.

Since there were a lot of parties involved in this campaign, how close was the collaborative process during the launch?

We do have instances of campaigns where we do what we call ‘war rooms’ [where all parties are gathered in the same room during the launch.] For this one, in particular, it didn’t happen locally. Although Twitter wasn’t available physically, we were virtually supporting Huawei’s team in Saudi Arabia and Wavemaker in Dubai to ensure that everything ran smoothly.

Are a lot of brands very hands-on in the process when it comes to live stream Twitter campaigns?

As best practices, we always tell them to be more present, to be hands-on, to answer the requests that come in.  The nature of the live stream is such that conversation is bound to arise.

Best Use of Live-Streaming – STC KSA

This title is given to a brand that took the live experience to a new level, bringing consumers into the fold in innovative ways during a launch.

Living up to the true meaning of the brand name Sawa, which means ‘together’, STC launched the new identity of its prepaid service with the objective of empowering Saudi’s youth, by having them collectively reveal the revamped identity. Under the hashtag #جيل_سوا_أقوى (Sawa’s Generation is Stronger), the live campaign unveiled a hero video featuring various themes depicting the energy of the Saudi youth, through a world-first Periscope mechanism: heart-to-unveil.  In the teaser phase, the brand asked users to heart (i.e. like) the loop. A progress bar was set on top of the loop to determine how many hearts the video received.  When the stream reached 15,000 hearts, the hero video was unveiled.

This title is given to a brand that brought the magic of Twitter into real life by converging digital and experiential to launch something new.

Humanity is the thread that binds us together.

We’re teaming up with @TwitterForGood and @Kniterate to turn that thread into a unique scarf and #KnitForRefugees.

Under the umbrella of Twitter’s philanthropic arm @TwitterForGood, The UN Refugee Agency (UNHCR) partnered with Twitter to use the power of the platform to generate awareness around the harsh conditions of winter and urge people to make a real difference by contributing with donations – beyond just the usual social media uproar. Under the hashtag #KnitForRefugees, UNHCR tweeted a video that encouraged people to make a difference by retweeting and donating in advance of the winter season. Launched in MENA and traveling around the world, the campaign will end on December 17th with a series of digitally knitted scarves, produced by Kniterate’s compact digital knitting machine, featuring the handles of randomly selected people who supported the cause on Twitter and a crowd-sourced story written by Neil Gailman in the UK.

“For every person that tweeted, they received an auto-response in their notifications which asked them to donate to the cause.”, stated Terroir.

The brand that leveraged influencers and creators to spread the word during a launch in new and interesting ways.

This Ramadan, Vimto wanted to bring a new angle to its association as the Ramadan drink. Leveraging Twitter’s In-Stream Video Sponsorships solution, Vimto partnered with HIA magazine to create a branded Ramadan original show, featuring Vimto recipes such as smoothies, cheesecake, and cupcakes. Titled #VimtoCreations, the Arabic program showcased a number of personalities in the Middle East such as Bayan Linjawi, Lojain Omran and Njoud AlShammari, who were filmed cooking different recipes in their own kitchen.

Since the campaign involved cooking with influencers within their homes and kitchens, it was more relevant to bring the campaign to a lifestyle magazine rather than a cookery magazine.

How was the audience notified when a new episode was released?

The episodes get pushed to the timelines of a targeted audience as a promoted tweet. With the objective to maximize reach, each stand-alone episode aimed to reach as many people as possible. For instance, the audience who viewed the episode on cheesecake didn’t necessarily need to view the smoothie episode to be able to follow the series.

Twitter Takes the Stage
What We Learned at GCF 2020