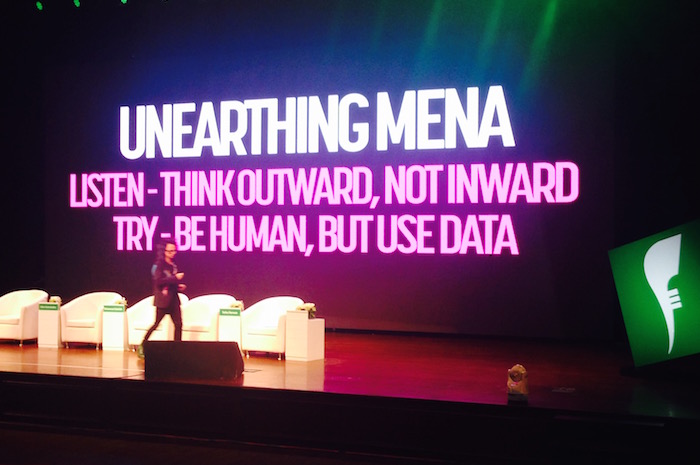 Festival of Media MENA continued with inspiring and invigorating talks, and as the day went on, they became more and more regionally targeted.

Speaking of mobile use, he said, “If you’re not making a call, you’re either consuming content or creating content”. He emphasized that while everyone says mobile is the second screen, and television is the first screen, this is not the case. A quick audience poll showed that only one person turns on their TV before reaching for their mobile in the morning.

Singh then moved on to discussing how content should be delivered: “The concept of day-parting is gone, there is no longer one time during the day that people are more or less receptive to content. Any moment is the best time to day-part; the best time is now.” He proceeded with some pro-tips for creating shareable content: use engaging thumbnails, don’t overuse hashtags or other links, and have a clear call to action like a “watch now” button connected to a video.

Singh explained what he refers to as “content superchargers”: content must be native, integrated with external experience, and relevant in the context of the moment. He elaborated, “All three things have one thing in common, which is harmony.”

Wrought with examples of his best case scenarios for ads that are placed on Twitter, Singh’s discussion theme seemed to be alignment. He posed that in order for content to be amplified by shares, it must be aligned with a current event.

His examples included, Dove’s #Speakbeautiful campaign, which was inspired by the 5 million negative tweets about body image or looks that cluttered the Twittersphere in 2014. Dove’s campaign asked people to speak positively about themselves and each other, and it launched during the Oscars. Singh explained that this piece of content was supercharged because of its timing.

And he finished with a shout-out to the consumers, highlighting the need to harness the power of user-generated content: “it’s central to a brands’ presence”. He wrapped up by saying, “Start by listening, once you listen, develop a muscle memory for how to communicate with the people.”

Starting the day’s second round of sessions, the conversation about digital continues with “Unearthing MENA Digital Landscape”. Collaborating in a panel discussion, Lina Habib Naifeh, founder and managing director of Media Blends and Fadi Khater, founder of Netizency, discussed some interesting factors that effect the digital scene in the region.

The regional industry buzz indicates that there is a huge capacity to target consumers in the Saudi Arabian market that has remained wholly untapped. Naifeh’s presentation focused on the Saudi woman consumer, homing in on some very interesting statistics. She specifically noted those that are common misconceptions. Some examples, 85 percent of Saudi women wish to continue education, 90 percent aspire higher living standard, and 76 percent wish to drive. Naifeh highlighted that the women do not necessarily want to get behind a wheel and drive a car, but they want the freedom associated with the act of driving.

Following this thought, Khater continued by illustrating another element of the Saudi environment. He provided an interesting statistic that in Saudi there is a 20 percent higher conversion rate on mobile than the global average. This statistic speaks to the regional landscape shaping m-commerce, because it’s presenting a market within the MENA region that is hungry for it.

This panel’s main agenda was to wake-up the regional media industry with hard, solid facts about KSA. In the Kingdom, there is great opportunity, but in order to target its nationals effectively, the industry must work to understand this market and its diversity.

As a passionate industry member, Shingy moderated the panel on “Tech Driven Media Trends”. The conversation played out between Roy Armale, of Cheil Worldwide, Tarek Abdalla from Google, and Waseem Afzal, OMD MENA.

The first item on the agenda was the discussion of cyclical trends. The topic turned to consumers desire for tangible content versus digital content, and panelists argued that these waves come in cycles. There have been times where the market has wanted nothing but digital content, and then came a shift, where people want to take things from a digital space to a more tangible one.

Shingy posed a question to our panelists: “At the end of the day, media is still media, are we now just churning around the same ideas?”

Contrary to common opinion, “the new stuff isn’t killing the old stuff,” responded Tarek Abdalla. He referred to the dialogue, surrounding the tension between old and new, as drama. But he concluded that nothing is actually going away, television is still being used, print is still being used, so it now has to be about integration.

Spinning off this idea, Armale said, “the technology is going to change, but human nature isn’t”. He proceed to explain the lack of commitment that currently exists regarding technology adoption. His final sentiment was that brands and tech companies need to commit more to one piece of tech and avoid chasing each emerging trend.

Referring to them as smarty-pants, Shingy asked our panelists what trends they’re excited about. To which Armale replied, “I was blown away by the initial google glass videos, but as consumers, we set our expectations for technology too high, too quickly.” He expanded with one issue that worries him about emerging technology: “Sometimes technology can be looked at as something that can enhance the work that we do, but sometimes, it can just present 1000 more ways to disrupt your day.”

Providing a nice wrap-up on this panel, Afzal drove one over-arching point home: “you’ve got to go back to the basics to enforce what will resonate with the consumers.” This sentiment could be applied throughout the days’ conversation. The best thing we can do, especially with the technology-driven changes to the landscape of media is to remember that at the end of the day, it’s still media, and it’s still about the consumers.