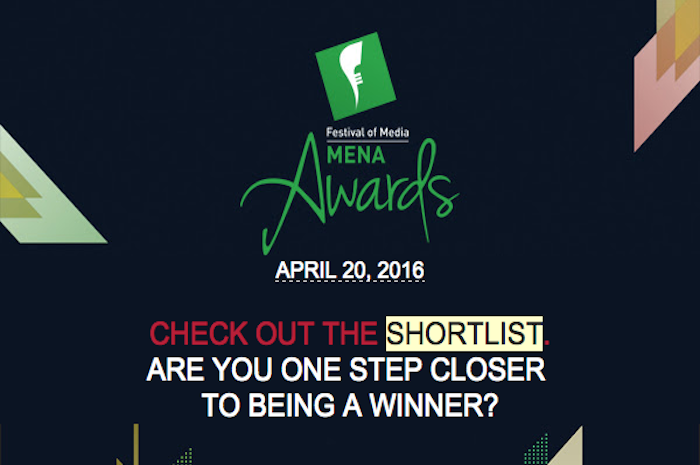 The shortlist for the Festival of Media MENA 2016 Awards is out. Starcom Mediavest Group (SMG) takes the lead with 21 entries across 12 different categories including Best Communications Strategy, Best Engagement Strategy and The Smart Use of Data Award. Other stand-out agencies include MEC and OMD who are both shortlisted 15 times, followed by Mindshare at 14. Other agencies to make the shortlist are MediaMonks, Buzzman and Digital Republic.

The Festival of Media MENA Awards is the only award purely dedicated to media in the region. Now in its second year, the festival has picked up momentum with a 53 percent increase in entries, leading to stiff competition in the first round of judging. The competition includes work representing a wide range of brands including Adidas, GSK, Nissan, P&G, Unilever, Visa, Samsung, PepsiCo, Johnson & Johnson and Nestlé.

More than 40 judges including experts from leading brands, media agencies, specialist companies and media owners evaluated the quality of the campaigns over the last three weeks. The final winners will be decided by a final jury and revealed at a grand awards evening of celebration and entertainment on 20 April at Music Hall, Zabeel Saray in Dubai. The awards ceremony will close the day-long Festival of Media MENA conference, which aims to transform everyday media challenges into solutions with educational, inspiring and innovative content featuring speakers ranging from PepsiCo and Blippar to Expedia and AOL.

Addressing the trends in the marketplace, a new addition to The Festival of Media MENA Awards is the Twitter Live Marketing Award in partnership with Twitter. It looks to reward the best real-time campaign by a brand or its agency leveraging the social media platform. Entries are also still welcome to the newly launched the Best Use of YouTube Award, highlighting how effectively YouTube can be used in brand communications. The deadline to submit entries for the Twitter Live Marketing Award is March 21, while the deadline for the Best Use of YouTube Award category is March. To enter either the Twitter or YouTube categories, only a simple written submission is needed, with client approval.