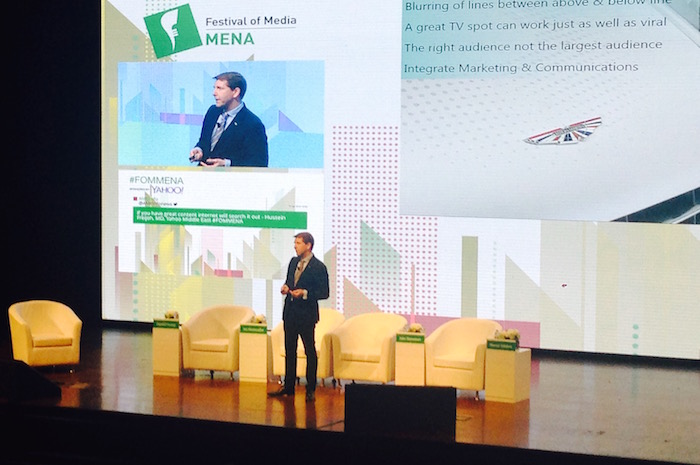 The second round of talks at today’s Festival of Media MENA encompassed three major aspects of regional media; there were conversations on luxury, programmatic and mobile. These talks offered a nice spectrum of the regions media landscape, ranging from aspects of the environment that are currently successful, like luxury, and areas where the region does have a bit of homework, like mobile advertising optimization.

In his regionally relevant talk on “Creating Luxury Content,” expert Simon Sproule came with his perspective as global marketing director for a car company that oozes luxury, Aston Martin.

He began with his intention: instead of lecturing the room of industry members about content, which he explained we all know well, he would attempt to put some ideas into our heads. “I don’t believe that luxury is any different, inherently, from mass, when it comes to the basics of storytelling,” he started off.

Interestingly, he provided some thoughts that may not necessarily be shared throughout the current media environment. Delving into the topic of television, Sproule had a different take on it’s future. There is a general sentiment that the TV spot, as is, no longer works, but Sproule expressed his overt disagreement with this concept. He believes that the TV ad is second to none for audience reach, and he expanded on this by using Volkswagen’s Superbowl ad featuring Darth Vader, as a prime example of a success-story.

“It’s okay to go long,” Sproule continued, noting that the current environment is obsessed with producing the shortest content possible; but he said, “the luxury of great storytelling deserves time”. His last talking point certainly hit home for Communicate: “don’t forget the joy of print, we’re not going 100 percent digital,” Sproule said, alternate to what many people believe to be the future.

Appropriately for this region, with its carnivorous appetite for video content, Sproule ended with an Aston Martin ad spot. The video, although cool, did work against his previous point about the value of length. According to Sproule, the spot is the most popular campaign the company has ever produced. It featured the iconic car against a dark backdrop, the only sound, an engine rev. The ad spanned a few seconds.

Next up was a panel discussion on what some consider an elusive topic: Programmatic. To express this ambiguity, moderator Charlie Crowe, founder of the Festival of Media, took a pulse-check of the audience asking “who really knows what programmatic means?” The hand-count represented approximately 10 percent of attendees.

To help clear things up, managing director Europe of Dataxu, Jan Heumueller, said programmatic is simple, saying, “it’s about delivering the right message at the right time on the right devices”. PubMatic’s vice president EMEA, John Stoneman humorously described how he explains his job to his mother, he said, “Programmatic is all about a decision making process,” using an example of choosing what ad should run when in television. Marcus Siddons, managing director of Xaxis MENA, whose doors recently opened here in the region, described his company as a “media products business”. He wanted to go back to basics, describing programmatic as simply, “the automation of media-buying”. Siddons explained that “the Middle East was the last piece of the puzzle” for his company.

Opening up the conversation to the MENA landscape, the panel discussed their confidence about how quickly the regional market will adapt to programmatic. Daniel Young of DMS helped to expand the conversation by identifying the relevance of linking the experience from one screen to the next to enhance the user experience.

In addition to providing regional relevance, this panel helped clear up some confusion and misconceptions surrounding the complex nature of programmatic.

Mobile is a widely discussed topic, globally, and especially here in the MENA region with its unprecedented penetration rates. However, advertising in the region is having a difficult time catching up with their consumers. Although brands and agencies are well aware of the need to meet their users on the devices on which they spend their time, brands struggle to create cohesive mobile solutions.

The moderator, Jeremy King of C Squared, asked the looming question: why aren’t brands capitalizing on mobile advertising? In response, Sindaha gave brands a piece of advice: “take a piece of content or campaign and make sure this piece of content is optimized for whatever platform it might be on.” He explained that the key is integrated thinking between the content and the applications. Phillips agreed with this notion, stating, “a brand must look at mobile as part of the entire digital strategy and not just as a stand-alone”.

Talking on m-commerce Sindaha zoomed back into the region saying, “once m-commerce really comes into play, thats when we’ll see big data come into the mobile space, but we’re not there yet”. Maher clarified that it’s not only about brands getting onto mobile to engage with their audience there, but they have to change it up: “speak in a different tone to the mobile audience, brands have to be more friendly there [on mobile].”

Overall, these sessions are educational by nature and by bringing Festival of Media to our doorstep, Mediaquest and C Squared have facilitated another event that will help the crucial conversation along in the MENA region.