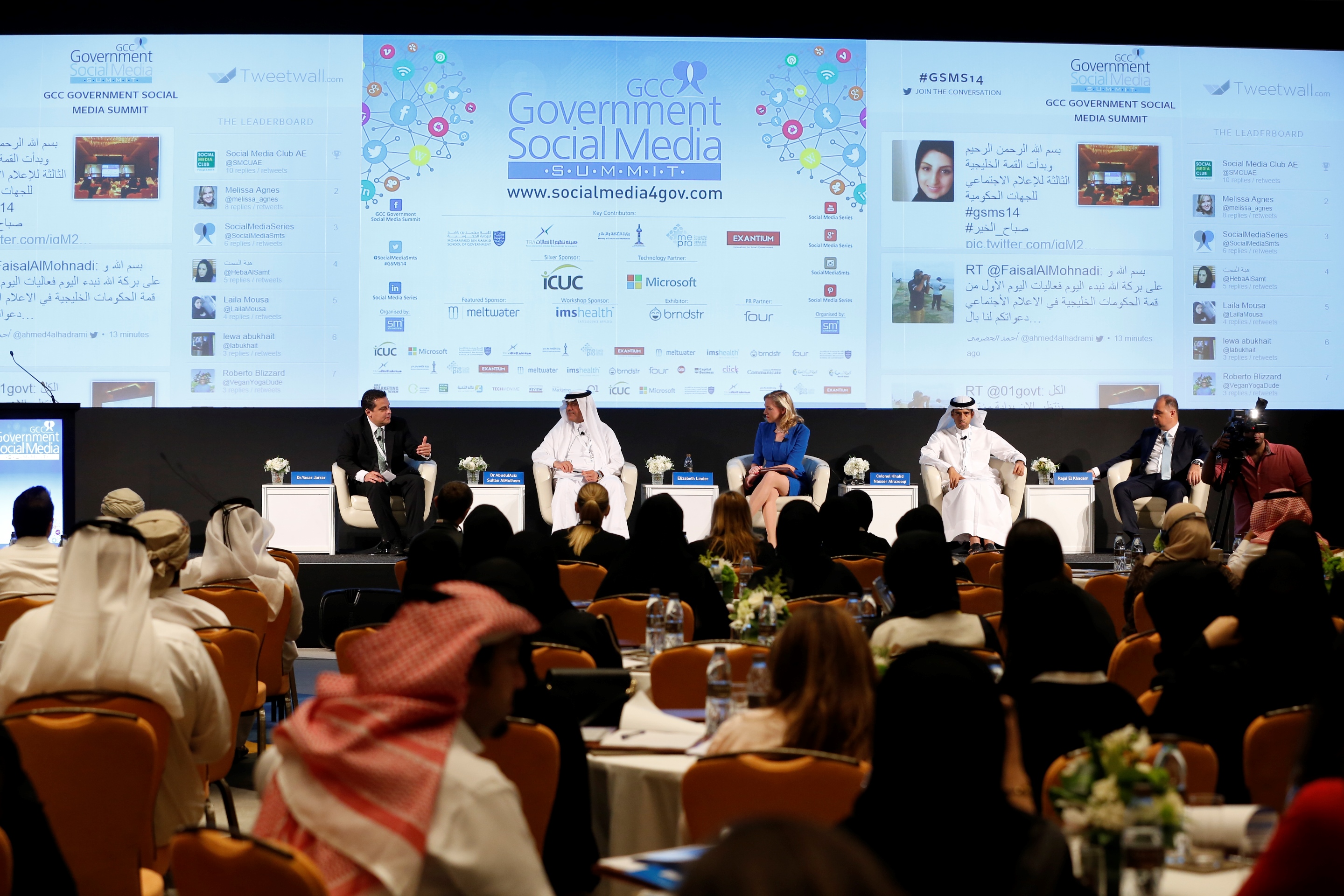 Under the theme: “Innovative Social Networks for Effective Collaboration & Smart Governance”, the third GCC Government Social Media Summit 2014 kicked off on September 17 with a panel discussion on “leveraging the value of social networks to deliver a smart, engaged and interactive government”. Moderated by Yasar Jarrar, member of the World Economic Forum Global Agenda Council on Future of Government, the panel included Abdulaziz Sultan Al Mulhem, advisor to the minister and spokesman at the Ministry of Culture and Information, KSA; Khaled Al Razooqi, general director at Dubai Police’s smart services department; Rajaj El Khadem, government affairs manager for the MENA region at LinkedIn; and Elizabeth Linder, politics and government specialist at Facebook.

Nearly four years into Linder’s role as politics and government specialist at Facebook – which was created in January 2011 out of London – her department has grown from a one-woman show to an entire team that “liaises with politicians, government officials, ministries, diplomats and civil society leaders to help them understand how they can use Facebook better and understand its data”, she tells Communicate. Essentially, the department’s offering remains largely unchanged from Facebook’s, often devised on a case-by-case, objective-oriented basis. “Some governments just need to raise awareness, get an emergency response unit, or just need to get information out to the right people at the right time; in which case I would suggest a strong sales or ad component. In other cases, it could be just soft-powered diplomacy,” she explains, adding that hers is a free service – rather than an official collaboration and partnership – that she would like to keep that way “because it gives us the freedom and flexibility to work with as many constituents as possible”. In fact, Linder’s portfolio of clients includes NATO (North Atlantic Treaty Organization), for which “Facebook was very core to its communications on its recent summit in Whales” – whereby NATO invited a 17 year-old Instagrammer to cover the summit – the European Parliament, the British monarchy, the Dutch royal house, the principality of Monaco, and the royal Hashemite court. Her team, Facebook’s politics and government outreach program, has grown its base of regional experts, having recently assigned a specialist for the UK who worked with both sides of the Scottish independence referendum. “One of the key players in the Scottish referendum debate, Douglas Alexander, just got on Facebook a few weeks ago. As the debate got heated – having reached 10 million mentions – his office called us up and immediately got in the game. There’s a lot of development around Facebook pages for public figures. We have a new mobile app called Mentions, which has just been added to the App store in the UAE and that allows public figures with a verified facebook page to better understand [the platform],” she tells Communicate.

Jarrar sees some ambiguity as to governments’ and public figures’ data management and ownership on Facebook, a private company. But, Linder begs to differ: “The content that you place on that page is entirely up to your discretion. [But] there are some very important controls to understand,” such as making the page accessible – or not – to specific countries.  And while Linder’s team is collaborating closely with government ministries through workshops and trainings, LinkedIn is working on a large scale with governments to help them connect job market dots all over the world and fill the unemployment gap across borders.  In the UAE’s job recruitment market, El Khadem says that it is usually one of two problems: not enough competencies in the local market, and not enough exposure for the right competencies to match the right jobs. As such, LinkedIn’s future vision “is to create the world’s first digital economic graph. With this wealth of data, we can advise governments on where to recruit people from [across borders],” explains El khadem.

As the likes of Facebook and LinkedIn are pushing for the digitization of governments, the latter are also making efforts; Dubai Police’s penetration of e-services – which the government launched in November 2013 and, now, promotes on social media – has already reached 50 percent, claims Al Razooqi, who even adds: “We might change policies to actually start charging people who visit our service centers to get their transactions done.”

Al Melhem has a rather conservative outlook on governments’ involvement on social media, whether in their activity on it, or their regulation of it. “Social media networks are considered to be private properties and spaces, and do not fall under the government’s mandate. Our scope of work in that sense is limited to ensuring that users do not offend religion, certain figures or the state on social media,” he says – although his statement conflicts with recent reports that the KSA is looking into regulating YouTube – cautioning citizens, on their end, to read terms and conditions before pressing on the “Agree” button.

This opens a whole other debate on the privacy and security of information for governments in a connected world, which were duly and extensively discussed at telco operator du’s Hackathon conference, which coincided with the GCC Government Social Media Summit. While Linder cites government policies that “have not necessarily caught up with the 21st century” as a challenge to their online presence, Major General Mihály Zala, head of the NSA, Hungary, spoke of more dangerous liaisons in his talk: “Cold War in the Cyber World”. Digital cyber crime is rooted in terrorism and organized crime that have emerged as global threats in the mid-1990s, Zala tells Communicate. And in this sense, they are no less dangerous. In the last four years, the NSA – and governments at large – have faced numerous data breach, industrial espionage and hacking problems, which were further exacerbated by informatics providers’ limited access to their systems and structures; “which means they make vulnerable systems,” explains Zala, adding that the NSA’s had several cases where it recognized botnets and software designed to automatically retrieve information from it systems and had to shut down its command and control servers. “We have seen 2.5 million such botnets yearly, and we can only revert several hundreds of them. This is a never-ending story.” There’s not much the NSA can do to prevent such attacks, but it is constantly trying to identify weak points that attackers could use as entry points. Last year, a new law was passed making the NSA as the only authority that can assess governmental and infrastructural institutions, having beefed up its structure to include assessment experts from private companies, and collaborated with some of the latter, including IBM and Aruba.

However, these efforts can prove futile if not supported by more thorough education for citizens and users and more transparency from companies with regards to cyber security and safety.  Zala gives the example of the recent iCloud hack, which he believes was the result of a misconception that the cloud is a secure non-invasive solution. “Forty-eight percent of cloud providers are using the data for their own purposes without possibility to restore it; which means that you put the data in the cloud and you may never see it again. You can attack everyone on the cloud through one person. And, as commercial companies are interested in earning money, they will put it [the cloud] in countries where employment is cheaper, so maybe your cloud registers your data in Africa. The cloud solution works if you have your own private cloud. But using commercial clouds is dangerous,” he says – asked about Wikileaks’ recent accusations on the NSA US’ invasive espionage of worldwide leasers, Zala admits “it’s not very nice for the privacy”, but asserts that the biggest threat remains cyber-crime, not governmental agencies fighting it.

In a later talk titled: “Security Strategies for 2020”, Nagueb Attia, VP and chief technology officer at IBM MEA, talked about three cornerstones for the future of cyber security and safety: intelligence and cognitive techniques as well as analytics tools applications “to understand behaviors, trends and activities on the world of security”; continuous collaboration and innovation exchange between governments and academia; and complete integration between a business’ network of suppliers and partners “because security hacks can affect any of their systems, and consequently, yours. That is what happened with  [US retailer] Target,” which, in December 2013, had the credit and debit card data of 40 million of its customers exposed to a hacking attack on its checkout systems, as reported by Business Insider.

As the world enters the age of the Internet of Things and of smart devices, efforts to counter cyber-crime must be intensified. In this regard, Attia has got some concerns on smart cities, which cannot afford to “leave everything open” with no preventive measures. “The world of security and IT is aware that the fridge now can be a point of attack,” he says, admitting, however, that “you can never know how much data [government agencies] collect”. From its part, IBM has a security research organization and X-force, a group of people who are constantly rummaging through the Internet to raise awareness around cyber security.

For all the leaps they’ve made, the question remains whether or not IT companies and governments can ever catch up with cyber criminals. “We cannot say that security is doomed. We know there are threats. Specifically with regards to the Apple [iCloud] attack, it is clear there was a weakness, which the authorities are investigating. They [hackers] had a method [that] enabled them to try billions of passwords until they reached the right one. We cannot avoid these issues, but companies are doing their best to limit them,” says Mohammad Amin Hasbini, senior security researcher at Kaspersky.

Pressing matters
What is the best part of you job?