The winners of the sixth Cannes Corporate Media & TV Awards – one of the world’s most important festivals in the corporate audiovisual industry – were revealed on Thursday, October 15, at Palm Beach Cannes during an Awards Gala Dinner. More than 270 guests travelled from all over the world to take part in the festivities.

The international competition received 772 submissions representing 40 countries, some as far-reaching as Australia, Brazil, Canada, Hong Kong, Japan, Qatar, Russia, Singapore, Taiwan, Thailand, the UAE and the USA. A total of 152 productions were awarded the coveted Dolphin Trophies in Gold, Silver and Black. The list of winners can be found on the festival’s website.

The film production company Lichtspiele ‘The Film Agency’ was awarded the Grand Prix for the image film The Heartbeat of Switzerland for the client Swiss Federal Railways. The film was also awarded a White Dolphin, Gold Dolphin, Silver Dolphin

and two Black Dolphins for Best Director and Best Camera. Lichtspiele ‘The Film Agency’ also bagged the Blue Dolphin for the best production company of the year, an award that has been given away for the first time. “Production-wise, it is exemplary and the whole concept worked: it has a good story, is well written, has a good soundtrack and an emotional overtone,” says jury president, Peter Beck.

Here are some of the other winners of the Cannes Corporate Media & TV Awards 2015:

News On Request (NO)

Winners from the Middle East: 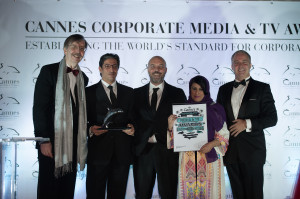 Title: On The Shoulders of Giants

Title: To the End of the Earth 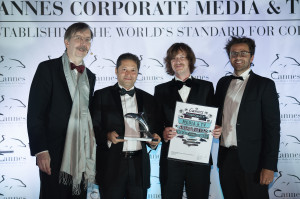