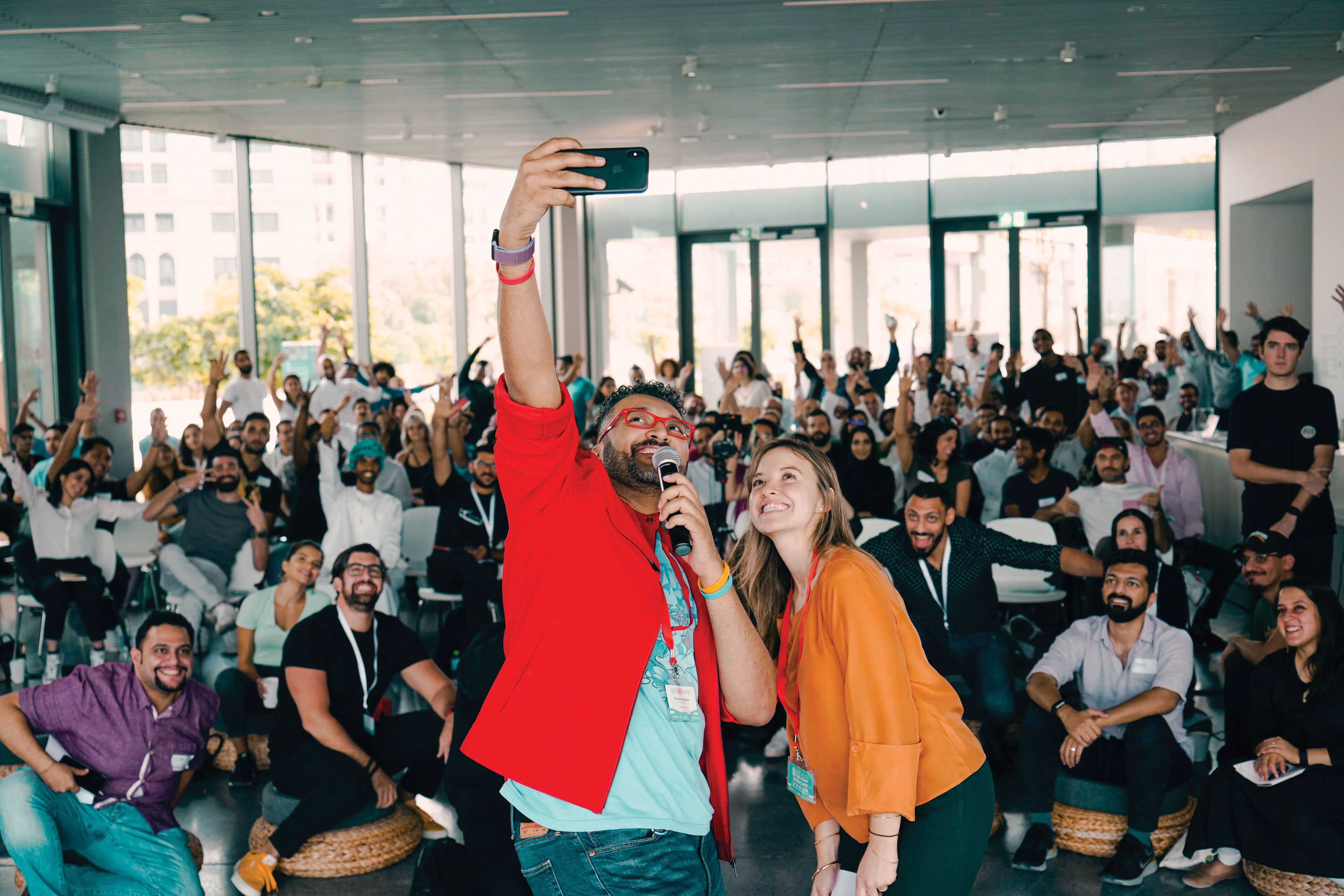 The end of this decade has offered many innovations to the world of communications; but the rise of audio is one particularly worthy of attention. Here is how podcasts are set to take over the ways we learn, are entertained and get informed.

This radio talk show-esque format, known as ‘online radio’ in the early 2000s when it emerged on RSS feeds, was dubbed ‘podcasting’ in February 2004 by journalist and futurist Ben Hammersley in an article for The Guardian. Though their length can vary from short (around 15 minutes) to very long (free-flowing conversations that last several hours), podcasts are increasingly popular: podcast analytics and attribution software Chartable indicated that over 700,000 podcasts were part of the iTunes catalog as of March 2019, adding that the category is growing fast.

For the general public, podcasts offer the opportunity to be educated and entertained, often both at once. Indeed, today, time is arguably our most valuable commodity and one thing we can never get back. So, it’s no wonder that hands-free technology revolving around audio and allowing us to better manage time is gaining traction. You can consume valuable information via podcasts while you cook dinner or go for a run. A sure sign of the potential podcasts hold is streaming giant Netflix’s growing interest in the medium: its roster of podcasts, originally created for marketing purposes, is steadily expanding to include original content, aiming to eventually integrate it within a full-blown entertainment ecosystem.

For communications professionals, podcasts represent a new vessel for distinct and varied strategies across earned, paid and owned media: the public relations community can create interview opportunities; owned media can be enhanced by outsourcing audio production to podcasters in order to create branded material; marketing strategists can leverage native content and short awareness boosting advertising spots targeting engaged listeners of podcast episodes. The IAB’s Fiscal Year 2018 Podcast Ad Revenue study, published in June 2019, stated that 51.2% of ads on American podcasts in 2018 were native content: baked-in or edited-in ads (epitomized by Jay Shetty’s On Purpose podcast episodes that frequently feature him reading a script praising a brand’s products and often offering his discount code to listeners). The remaining 48.8% were composed of dynamically-inserted ads: short spots that play on streaming platforms such as Spotify.

In the Middle East, data from the August 2019 Podcasting & UAE report published by Markettiers MENA states that 76% of people surveyed in the UAE are familiar with the term ‘podcasting.’  Significant turnout at the Jameel Arts Center’s second annual Middle East Podcast Forum last October showed that voices from the MENA region are being heard and form an integral part of the global podcasting movement.

If you missed this year's @mepodcastforum (or just want to relive it) you can now hear all the talks available on all podcast platforms on the "Middle East Podcast Forum Podcast"! https://t.co/cypIUd4iED@mstdfr @Art_Jameel

Arabic podcasts are just scratching the surface of massive potential, according to Riyadh-based Abdulrahman Abumalih, founder of the popular Fnjan podcast. Abumalih should know: Fnjan has achieved 13 million listens and has garnered around 400,000 supporters on social media platforms.

“When Fnjan started three years ago, it was a place to have random conversations with my friends. And now, 150 episodes later, I have hosted scientists, businessmen, and government officials, to a weekly audience of more than 200,000 listeners […] In 2019, podcast listening has verged on the mainstream, being recognized via media awards and conventions. To us, 2020 will be the year that Arab podcast companies take the region by storm,” he says. To the point that Fnjan recently signed a partnership with airliner Saudia, to offer its podcasts to passengers as part of the inflight entertainment experience.

Abdulrahman Al-Omran, the Riyadh-based founder of podcast directory PodcastArabic.com, agrees that the past year has been a turning point for podcasters. “The podcasting rise in Saudi Arabia has been nothing but a surreal experience […] As of right now, there are more than 450 Arabic podcasts [across the MENA region] and counting: almost half of them started after 2018,” he says.

Many factors contribute to the rise of podcasting, in the region, and around the world. Demand for quality audio content is hard to overlook, and the supply has been strong, supported by the low barrier to entry: new podcasts about diverse topics can be – and are – created easily and quickly, with Google even training aspiring podcasters via its Podcasting 101 series co-created with PRX. Moreover, “Podcasts are an economical outlet: they don’t pose a financial burden and don’t demand professional editing skills […] That’s why we’re seeing new podcasts launching every day from people who want to share their passions and ideas with society,” says Ahmed Ashour, cofounder, and host of one of Saudi Arabia’s first podcasts centered around gaming and films, AlKshkool. Ashour has produced over 300 AlKshkool episodes since 2013, going from 200 listeners a month to six figures of listens today.

Meanwhile, Oman and Jordan have joined KSA to act as launchpads for podcasts. Muscat-based Turki Al-Balushi, a media entrepreneur behind the Al-Sekka podcast, explains that his interviews with Omanis who specialize in diverse industries have been noticed outside of his country. “We have audiences from all of the Gulf countries. This is an indication that people in the Gulf are interested in knowing more about the rest of the neighboring Gulf states,” he says. Similarly, Amman-based Ramsey Tesdell, managing partner at Sowt, says his location has facilitated the creation of successful content and branded podcasts. “Being based in Jordan has helped us keep our costs low and have access to highly trained content creators […] Our geographic location has really helped us attract a regional and global audience,” he explains.

Podcasters don’t just speak to the world from afar through a microphone. Some have been recording live at public events, creating new forms of engagement and monetization. Event organizers looking to integrate new elements that will generate more ticket sales have leveraged podcasters to offer a more enjoyable and interactive experience. Given that podcasts often have dedicated supporters, this creates a natural opportunity for meet-and-greets.

Case in point, Dubai-based signature events such as the Arab Media Forum and Sole DXB have featured live episode recordings of the Dukkan Show, in the form of pop-up activations. The podcast’s team built a booth and recorded interviews over the course of several days at both events while streaming on their social media accounts. 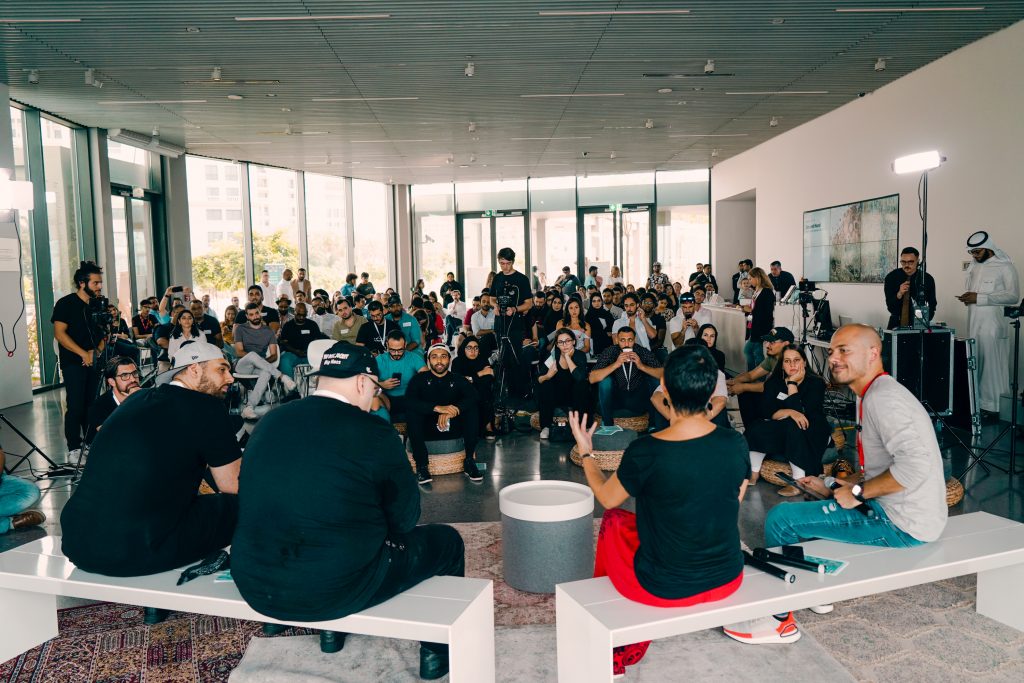 Omar Tom, founder of the Dukkan Show and Dukkan Media, also conducts outreach to aspiring podcasters and shares resources to help them succeed. “Currently, at Dukkan Media, we have full-fledged podcasting studios that we dry hire and rent out to anybody who wants to create a podcast. We also offer consulting services to help people develop podcasts and help grow their shows,” he says.

Kerning Cultures, a podcast with roots in both the UAE and the US, regularly hosts podcast listening parties – collective listening experiences followed by book club-esque discussions. It also held its first live podcast recording this year in a Dubai Design District café. Such paid events are meant to supplement the podcast’s public-facing monetization channel via RadioPublic and Patreon (the former is a platform that inserts bookend ads into podcasts and the latter acts as an online club that offers exclusive perks to fans who make payments to content creators). CEO Hebah Fisher, who co-organizes the Middle East Podcast Forum alongside Jeddah-based MSTDFR co-founders Rami Taibah and Ammar Al-Sabban, also says that podcasts are starting to be taken seriously in the region. Indeed, Kerning Cultures made history by becoming MENA’s first venture-backed podcast thanks to investors such as 500 Partners. “Podcasts are the media’s next growth market. From Kerning Cultures’ perspective, closing our round is a huge signal for the MENA industry as the first podcast company to receive venture funding. With our seed round, we’re investing in a slate of new programs, including three Arabic shows by January 2020,” she says.

Podcast enthusiasts can look forward to even more Arabic content produced at the next Middle East Podcast Forum that will be, for the first time, held in Saudi Arabia with panel discussions in Arabic.

Do you listen to podcasts? Fill in this survey, it takes 3 minutes and will help us a lot. We’ll share the findings here afterwards: https://t.co/RTwRRRCz7n @PodcastArabic @arpodcastcom @Podcaters

As for advertising potential for a podcast in and from the MENA region, business is only getting started. Fahim Benchouk, general manager of Fuzyo Studio, began offering white label podcasts to clients in the UAE several years ago; and he says that podcasting advertising revenue is primed to rise. “Audio content revolving around the spoken word has been overlooked by brands and communication agencies for a long time; but they have recently understood the enthusiasm with which many people engage with podcasts. The numbers from the US market speak for themselves: over one-third of Americans listen to at least one podcast per month. Additionally, four million people listen to radio (station) podcasts every month in France,” he says.

Podcasters around the world have made their voices loud and clear. Are you listening yet?

Elías Jabbe (Elias213.com) is a communications consultant, writer and traveler based in Dubai, UAE. This article is published in Communicate’s December edition.

2019 – The Roundup
The Constellations of OTT