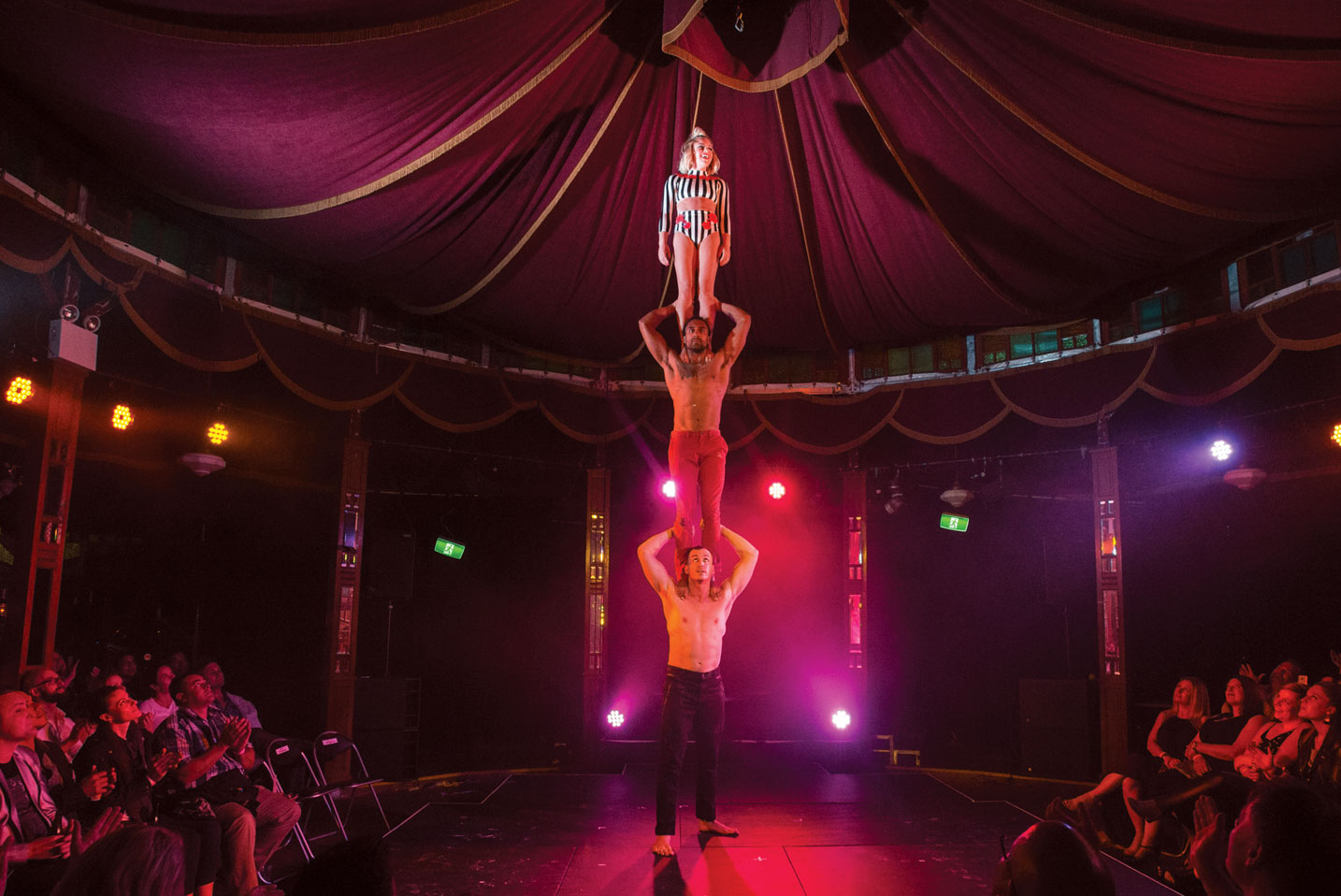 The self-described circus for adults Rouge shows how creativity can express itself in many forms. Communicate spoke to director Elena Kirschbaum.

A mix of acrobatics, cabaret and burlesque, award-winning, Australia-based Rouge is a different kind of circus that manages to inject a healthy dose of creativity in a discipline that sometimes goes in circles, constantly trying to push the limits of the human body.

Director (as well as event producer, juggler, acrobat and MC) Elena Kirschbaum came up with the concept in 2017, to challenge gender stereotypes in Australia and beyond. She explains how one key to Rouge’s success is to integrate her team into the storyline and to always bring fresh talent – and their ideas – on board.

Why name the show Rouge?

We wanted to have a single word that could sum up the experience that the audience was going to have. That’s very difficult, and ‘rouge’ has a few different meanings. But the color red [‘rouge’ in French] is a vital alert, a passionate color.

What is the philosophy behind Rouge?

It’s not just straight circus. Basically, we wanted to create a show that fits into that sexy circus cabaret genre. It’s a circus for adults, but it combines other skillsets as well. For example, we have a live singer, which is a really important part of the show. The philosophy is broader than creating something that was a sexy circus, to actually address sexuality in a very open-minded way. That’s something that I am really passionate about. I think our society is very repressive when it comes to sexuality. If we were going to talk about this topic, it was really important to open a conversation that was a little bit bigger

How did people react?

This show appeals to a mainstream audience, not only to people who have a fairly progressive kind of concept around this stuff. We’ve actually performed in some very conservative parts of Australia. We get quite a lot of older, wealthier, more conservative people often coming alone. That’s who the show is for. Watching those people become more open-minded in the process of watching the show is really wonderful.

What made you want to create a risqué circus for adults?

I have always loved the circus, but I think that there are a lot of people who feel like it’s not for them. So, we wanted to make a circus show that brings all of the magic of circus – it’s got incredible acrobatics and aerial work and all kinds of manipulation skills – but then introduces a level of storytelling to it. And that makes it really exciting and accessible to the adults.

How do you create the stories?

For some acts, there’s more story than others. And I think that it really depends on each act.  Do we start with the story? Or do we start with the circus skill? We know this person can do handstands on a big stack of chairs. So, we create an act and then the story. With that, we go backwards, thinking: “Let’s find some music that we think is fun. Let’s play with that.” And then, how can our performers interact with this person while they are balancing on chairs? And that sort of formed the story. We also have routines where we went: “Oh, my God! What if we created an act with this concept: imagine we are singing a song and hidden underneath the opera singer’s skirts, there are people. And the way she is singing that song tells the story of what’s going on under the skirt.”

How do you write the shows?

I think that it comes from a lot of different things. Part of it is that I love seeing shows. I would see easily between 100 and 250 shows every year, across all genres – and that’s really important as well, not just seeing work that fits into your own genre. I know what I like on stage and what I don’t. So, watching a show, I could think: “I love the way that they did that.” I don’t mean I’m going to replicate that on stage – of course not. I mean that I love how that made me feel. How did they do that? How did they take me on that journey?

The other part of the creative process is not saying no to people; hiring the right people and saying yes. That really struck me when we did our first season. A couple of performers and I were walking and one of them said: “Thank you for saying yes to me. I’ve never been in a room with a director who just said yes to every idea I had.”

That doesn’t necessarily mean that every idea that everyone had got on stage. But it means that when we were creating, I trusted I had hired these people for the right reasons. So, when they came to me with an idea, even if I didn’t think that it was going to work, I said: “Yeah, let’s try it. Let’s put it in the rehearsal room. Let’s give it a go,” before we knew whether this was going to go anywhere. I’ll be honest: there are things in the show now that, when somebody pitched them to me, I thought were not going to work. I didn’t think they were good ideas. But I trusted that I had hired that person because they were the right person. We put it in the rehearsal room, and I went: “This is incredible. I can’t believe I was going to say no to this.”

Who writes the show?

It’s very much a team; the show is created with the original cast. Part of the casting process was to cast people who were creative and quirky, the kind of people who are going to have interesting, weird ideas, in addition to fantastic circus skills. I had the concept; I knew what I wanted the show to look and feel like; I knew the kind of messaging, the sort of aesthetics, the feeling, the energy that it was going to have. Part of the process was explaining that to the cast and what ideas they might have had to fit into that [concept]. So, when we got in the rehearsal room together, there were a couple of acts with a concept that had already been created by one of the artists, and they said: “Oh, I’ve got an idea for this.” 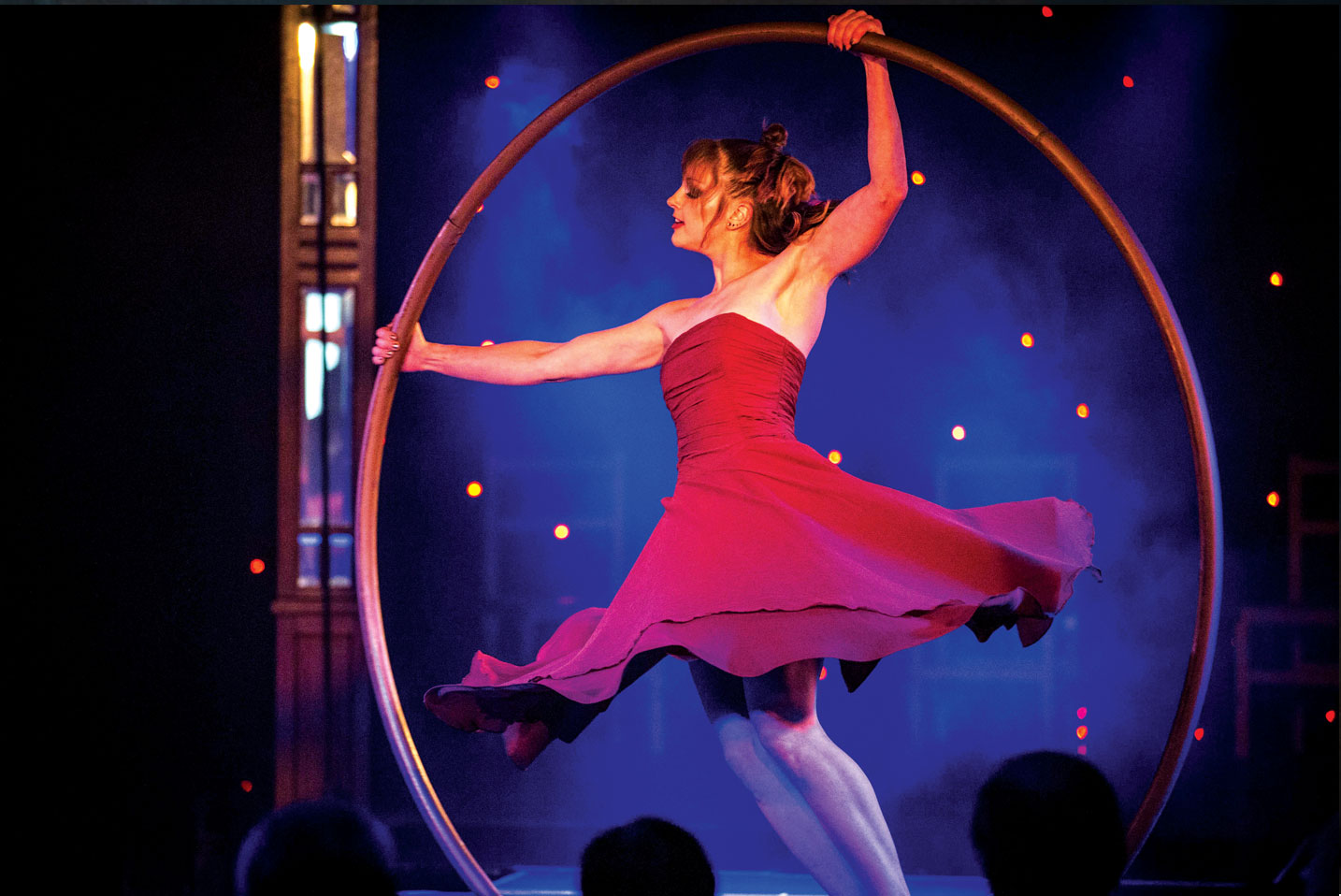 Who decides over the programming of the show?

I think that the audience likes to go on that journey with the performer, so by the end of the show, when we have those more outrageous things on stage, the audience is loving it. We say that this show is covered in politics that is covered in spectacle and glitter. We are there to push people a little bit but in a gentle way.

How do you create the costumes?

We had an amazing costume designer, called April Wilson, who actually is a performer herself. She and I designed the costumes together. We started with a Pinterest board. The brief I gave her was that I wanted to play with gender and costumes. I said that I didn’t want to put anyone in a stereotypical costume. I guess it’s about trusting somebody who’s got their own fantastic creative process.

Once, we had one performer who said: “I don’t like this, I don’t feel comfortable in it.” We are performing a show where the performers have really strong personalities on stage. It’s important to me that they feel comfortable and confident on stage. So, it was a no brainer to change the costume.

What does creativity mean for you?

It means having an imagination and a yearning to tell a story. I don’t think that to be creative, you have to always be wanting to make art; you don’t always want to have to change people, to make this huge impact or make something that’s really deep and meaningful. I just think you have a passion for telling a story and that can be as simple as putting something on stage that’s just going to make someone happy, that’s going to give people a great experience for an hour. But it might not change the world.

Does the financial aspect play a role in creativity?

No! I don’t think it plays a role in creativity, [but] I think that it does play a role in someone’s ability to create something if that makes sense.

You can be incredibly creative and have nothing to work with. Not having money doesn’t stifle creativity, but it does change what we, as an audience, get to experience from a person.

This piece was part of Communicate’s September print edition.

How to Define Creativity
The Power of Language