At 5 pm on the Fourth of July, forty-odd members of Team Adidas were watching the kick-off of the Colombia vs. Brazil quarterfinal match on three flat screens from Adidas’ real-time marketing hub in Rio de Janeiro. A fourth screen tracked the most searched players among the 100 or so World Cup athletes Adidas sponsors; it showed Colombian star James Rodriguez rise to the top of the list.

The war room is located at the Rio headquarters of Flamengo Athletic Club, one of the world’s most popular soccer teams. During the World Cup, the headquarters is home to Posto Adidas, a three-story retail space, media center, tech hub and rooftop VIP space – a gut renovation of an area that previously housed over 4,000 Flamengo trophies collecting dust. 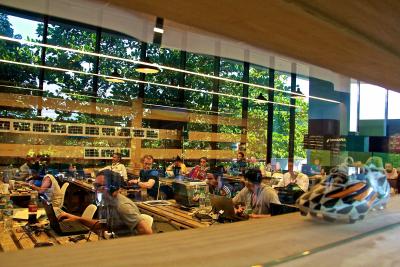 The war room from the outside. Credit: Julie Ruvolo

It was the biggest day thus far at the month-long World Cup, and of Adidas’ months-long preparation to do real-time marketing on a sustained global scale. The winners of the days’ two matches – Germany against France, followed by Brazil against Colombia – would play each other in the semi-finals on Tuesday, July 8. Adidas is one of the tournament’s major sponsors, and it has spent the last year crafting an ambitious campaign to build the players and national soccer federations it sponsors – representing nine of the 32 national teams that made it to the World Cup – into heroes that are “all in or nothing”. By this point in the tournament, the Adidas campaign slogan seems as appropriate for the marketers as it is for the surviving teams.

“We want to be the most talked about brand at World Cup,” says Tom Ramsden, brand marketing director for Adidas Football, who oversees communications across advertising, PR, social and retail. “We knew we were going to do something real-time, that isn’t completely brand new to us. But it is at this scale.”

“The spin-off would be to be the most talked about in terms of how much traffic you can drive to retail, use of things like the hashtag and everything else,” Ramsden adds. “But that simple goal is what is keeping the train on the tracks.”

The preparation is over. Now it‘s time to deliver. @jamesdrodriguez: #allin or nothing. #WorldCup pic.twitter.com/GJvaZTzs8u

While real-time marketing has often meant a social media push around a relatively limited event like the Super Bowl, July 4 marked the 23rd consecutive day of Adidas’ effort to produce and push out exclusive content across social and global retail channels in sync with events during the 64 World Cup matches. For the last year, London-based social media agency We Are Social has been flying across the globe to gather content on over 100 Adidas players that can be assembled on the fly – regardless of who wins. Luckily for Adidas, one of those athletes is James Rodriguez, a 22 year-old who had scored six goals by this point and was the emerging star for Colombia, an Adidas-sponsored team that hadn’t gotten this far before in a World Cup.

We Are Social pared the massive footage it gathered down into a “content bible” of 1,000 images and 160 videos primed for use in reaction to game play – clips like Rodriguez shooting a penalty kick to Colombian player Pablo Amero demonstrating his victory dance. By December, it had an hour-by-hour calendar of the full 32-day tournament, anticipating what might happen, and developing content around it. 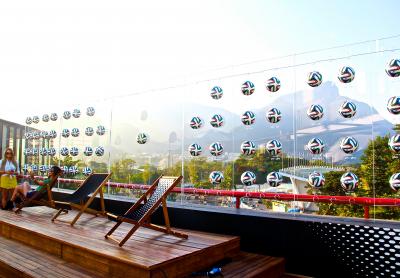 Thus far, Adidas seems to be achieving what it set out to. It is the most talked about brand on Twitter during the World Cup, with over 1.6 million tweets, retweets and replies mentioning the brand, according to Rob Hughes, Adidas’ senior global football PR manager. And #allin is the most used brand hashtag on Twitter, with 570,000 mentions since the Cup began June 12.

The company’s YouTube audience has also doubled, with more than 200,000 new subscribers since play started. On Facebook, Adidas has added over one million fans, and a community built for Argentine star and Adidas player Lionel Messi has grown by 500,000 more.

“It’s the first time we’ve seen an advertiser be reactive during a sporting event on YouTube,” says Rob Pilgrim, industry manager at Google London. “There is a half-life on content, and it’s important to get it out. Adidas has been posting four or five videos a day and has been growing subscribers at a faster rate than all the other World Cup sponsors.”

In the war room, a technologically tricked-out classroom enclosed by glass displays of Adidas footwear, was mostly quiet except for computer keystrokes and clicks and a Brazilian announcer doing the play-by-play on ESPN Brazil Live. Laptops, wires and power cords criss-cross shared wooden tables where Adidas’ global football team, representing communications, social media, PR, production and ten global soccer markets from Brazil to China are sandwiched between execs from Twitter, YouTube parent Google, Adidas’ real-time media buying agency Carat and We Are Social, which is producing real-time content from the back row.

“Flexibility has been the key here,” says Rob Seidu, Carat’s London-based managing director for Adidas. “We’re creating a system and a framework versus the traditional media planning.”

At the day’s kick-off meeting at 10:18 am, Bindi Shah, senior account manager at Twitter, ran through the social media stats. The number of Adidas tweets had been increasing, averaging 12.2 million per day in the week prior and peaking when Brazil went into penalty kicks against Chile on June 28.

At 1 pm, the France vs. Germany match kicked off, and by 1:14 pm, Adidas player Mats Hummels had scored the first goal, for Germany. We Are Social prepped an image of Hummels, and it was live within a minute at @adidasfootball and @adidasfussball.

“After the game we’ll have the image on outdoor projections in Munich, Berlin and Hamberg,” says Marc Oltmann, Adidas’ senior communications manager, Area Central (Germany). “Public viewing is huge in Germany,” he adds.  By the next morning, it would be on digital out-of-home sites on the subway and on flat screens in German stores.

With five minutes to go in the match, Adidas’ Hughes told the team that three pieces of content were ready to go if Germany wins: a Hummels photo, a Vine video of his goal and a group shot in case another German player also scores.

After Germany completes its win, fresh Getty Images photos of Hummels and team members celebrating were tweeted from @adidasfootball, the brand’s global handle, as well as Germany’s @adidasfussball, with copy in German that translates to “checkmate”.

Within seven minutes, the tweet racked up over 1,000 retweets; Oltmann declares it the German team’s most successful tweet ever. It continued to climb.

“It’s about telling the right stories at the right time,” says Joe Weston, a We Are Social account director. “We can take something that’s much bigger than social and activate it from German undergrounds to retail stores across the world. Being able to dictate retail space from the content created in this room is massive. And none of the content we push out repeats, on that channel or on others, except for special hero moments.”

Adidas has sponsored the official World Cup ball since 1970, this time around crowdsourcing a name for it – Brazuca. “A million people voted and Brazuca came out on top,” says Gareth Leeding, We Are Social’s art director.

The Brazuca, which has over 3 million followers at @Brazuca – 2.3 million of them added since June 12 – has already been around the world, appearing in photo ops with an endless stream of soccer players as well as the likes of Snoop Dogg, Pharrell Williams, Justin Bieber and Samuel L. Jackson.

“It’s important to make sure it wasn’t just a football audience,” says Leeding. “#Allin is very serious, but Brazuca is more fun.”

By 5 pm, the war room had received the fifth meal of the day from an endlessly rotating buffet. Brazil captain Thiago Silva scored in the first seven minutes, followed by teammate David Luiz at the 69-minute mark. Colombia’s Rodriguez scored on a penalty kick with just ten minutes left to play.

“It’s now or never,” says Ramsden, clearly rooting for a win for Colombia and Team Adidas’ Rodriguez. He scrolled through Twitter results for “now or never” and discussed story options, including the emergence of Rodriguez as the World Cup star and a message to the Colombian team about holding their heads high. Team Adidas posted an image of Rodriguez within another minute: “Tomorrow never dies. @jamesdrodriguez #allin or nothing,” referencing a James Bond film because sports lore has it that he was named after 007.

By 6:55 pm, Brazil had lost its star player, Neymar, to a serious back injury but wins and advances to the semifinals. Adidas tweeted a photo with Rodriguez’ back to the camera and eyes on the goal box: “Hold your head high. @jamesdrodriguez went #allin for his country, and now he has the world at his feet. #WorldCup”.

Hold your head high. @jamesdrodriguez went #allin for his country, and now he has the world at his feet. #WorldCup pic.twitter.com/eJ5WcrYwQn — adidasfootball (@adidasfootball) July 4, 2014

“For World Cup it’s about clear moments,” says Ramsden. “Anticipated planning has been one of the keys to our success. We’re ready for moments, and we’re ready for lots of moments.”

He’s already looking ahead to the near future when the action is even faster and match balls and players are all micro-chipped to provide a new level of real-time stats.

“Think about the access and footprint Adidas has in football,” he says. “It’s unbelievable. Four weeks ago, James Rodriguez didn’t have universal appeal like a player like Messi, but now he does. The challenge is, how do we go from what is already a reasonably sized operation to something which is mass storytelling that is ten times the size of this right now?”