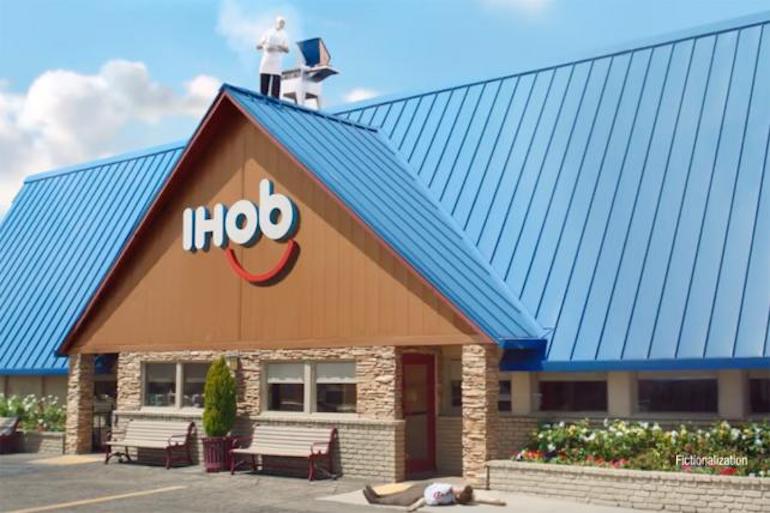 Last week, international chain IHOP changed its name to IHOb in a marketing gimmick announcing its new range of (b for) burgers – instead of P for pancakes.

The build-up to the announcement saw social media users speculate on what’s going on and Arab users, in particular, found much amusement in the ‘b’.

Well, all the replacement of P’s with B’s might go down well in the region.

For those who are not fans of the new name, there’s good news: it’s temporary.

“This was tied specifically to a marketing campaign to launch our burger line-up and is not a permanent name change for the brand,” a spokesperson told Communicate’s sister title AMEInfo.

Although the new name is temporary, the brand went all out with its President Darren Rebelez changing his title on LinkedIn to “chief burger officer”.

The international food chain has been making burgers since its launch in 1958. But, “even though we’ve had them forever, they just were clearly not top of mind,” says chief marketing officer Brad Haley.

He joined IHOP last year after more than a dozen years as chief marketing officer of CKE, the parent of Carl’s Jr. and Hardee’s, so he knows a bit about burgers.

“For us to make a credible statement around burgers, we had to not just make a better burger, but make the best one we could come up with,” he explains.

And so, consumer research was done on the type of ground beef, toppings, name, and so on. The burgers were then tested in four markets scattered across the US.

“We had to communicate the fact that we have burgers in a very disruptive way,” says Haley, all while being careful that IHOP’s burger advertising, which comes from Droga5, wouldn’t be mistaken for another brand’s.

So, what are the results?

Just a few days in, the buzz around IHOP – aka IHOb – seems to be working. Restaurants are seeing roughly four to seven times as many burger orders as they were before the switch, Rebelez tells Ad Age.

[Tweet “IHOb marketing gimmick results in an increase of 4-7 times in burger orders.”]

Most burger orders are coming during the lunch and dinner times. And while IHOP is running a $6.99 introductory offer on the classic burger, it’s actually selling more of the other versions with a variety of toppings – and higher prices.

Broadly, the campaign has played out as IHOP expected “except for the magnitude of it,” says Rebelez.

Attention and engagement exceeded IHOP’s expectations but the responses are similar to what it had anticipated after planning that included in-market tests and focus groups. At first, many people are curious, then a bit outraged when hearing IHOP’s focused on burgers, says the company, until they realize its pancakes aren’t going anywhere and that it will always be focused on breakfast.

Sure, there have been some “hate mail” types of reactions since the reveal, says Rebelez, but the brand hasn’t wavered. “Our guests told us that they wanted this.”

IHOP hasn’t changed its outreach drastically, though it did fine-tune some of its wording “to just make sure it was clear that we weren’t getting out of the breakfast business,” says Rebelez. “There was a little bit of an overreaction to that and so we just wanted to make sure that everyone was clear… we’re always going to be committed to our breakfast. We’re always going to be called IHOP.”

What about the franchisees?

IHOP knew that before it tried to win over customers, it had to convince the franchisees that operate its restaurants that the effort made sense.

“There was a reluctance at first from the franchisees because the brand has made a couple different runs at promoting P.M.-type offers in the past and they’ve typically fallen flat,” says Rebelez. “We knew we were going to have to do something different.”

As franchisees heard more about the plan, “they were cautiously optimistic” but also nervous, says Rebelez. Training and an early rollout of the new patties helped the chain prepare. And then IHOP needed to do something to get people talking about the burgers. Hence, the major pre-launch buzz and campaign from Droga5.

When IHOP teased the name change a week before the reveal, more than 70 percent of people guessed the seemingly safe bet of “breakfast,” while plenty of others chose words like brunch, says Rebelez. Less than 10 percent of people guessed the ‘b’ would be for burgers. To grow its business, though, IHOP sees a need to bring more diners in, more often, particularly during lunch and dinner times, when burgers are the go-to item.

IHOP was the second-biggest trending global topic on Twitter on the day of the reveal, June 10, even with the then-pending meeting between US President Donald Trump and North Korea’s Kim Jong Un. In the US, the chain held the No. 1 spot (IHOP), No. 2 (IHOB) and No. 4 (International House), Rebelez notes. There were 86,000 tweets per hour at the peak on June 10, according to IHOP.

MUST READ: What does noon’s deal with eBay mean for regional retailers?

“We have so much credibility but then that kind of falls off when you get to lunch and dinner,” says Rebelez. “We just want to give more people reasons to come more often.”

There have also been about 15,000 media stories, roughly three times as many as IHOP got this year for its biggest day, National Pancake Day. Now, its job is to continue that momentum and translate it into sustainable sales growth.

This is why hotel marketers have a soft spot for UAE residents
REVEALED: A new way of reaching your consumers