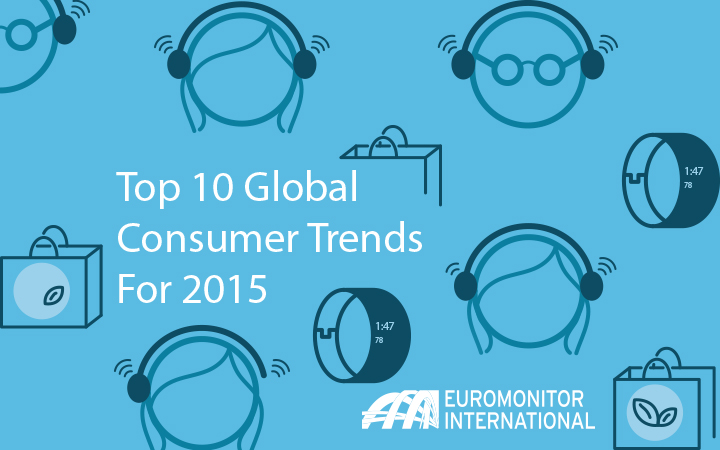 As consumers increasingly make choices based on creating a positive impact on community and the world of digital and real life converge, consumption patterns are set to see a change in 2015.

Below is a summary of the key highlights of the report:

Consumers are willing to pay for products and services that simplify their lives and optimize the use of their time. “As more time-pressed shoppers make purchases on their smartphones, an increase in “omnichannel” shopping options creates a seamless link between virtual and “real world” shops with wide consumer appeal,” states the report.

More shoppers prefer “top-up” shopping, choosing convenience over variety and choice, resulting in the growth and success of smaller convenience stores. Figures released at the beginning of August 2014 from global property consultants CBRE suggest megastores are in decline, with planned floor space shrinking. A CBRE summer 2014 survey of 21,000 consumers in 20 Eastern and Western European countries and South Africa found that around half of consumers prefer smaller shopping centers with convenient access. Euromonitor International forecasts for 2015 show that while sales in grocery retailers in the UK are set to grow by 0.2 percent in real terms, this figure will rise to 2.5 percent for convenience stores.

Other noticeable trends emerging due to customers’ need for convenience is 24/7 shopping facilities, omni channel shopping solutions and on-the go services. In summer 2014, Philadelphia International Airport became the first in the USA to offer passengers free use of 30 low impact exercise bikes in the terminal.

Consumption as a route to progress

Consumers are becoming more concerned about contributing to the greater good through their consumption choices resulting in brands aligning themselves with this habit through what they’re now calling “brand activism”. For instance, a bunch of Silicon Valley tech giants including Microsoft and eBay are now backing petitions website www.change.org. Even fashion brands are part of this change as evidenced by Joanne Hayek and Tatiana Fayad, designers of popular costume jewellery with a social message using up-cycled items, launching Beirut-based brand Vanina using restyled depreciated coins.

Woman empowerment and changing stereotypes are two rather important issues for brands and consumers alike. For instance, Benetton’s “Submit the news you would like to see” drive supports UN Women while “Women Fashion Power”, an exhibition in London, shows how prominent women in the field of fashion, such as Natalie Massenet MBE, founder of NET-A-PORTER and Chair of the British Fashion Council and Anne Hidalgo, Mayor of Paris among others. Another instance was the Islamic Fashion Festival in Kuala Lumpur, Malaysia, which presented Islamic women’s fashion as a part of everyday contemporary consumer culture.

The power of the Internet has led to the growth of the vloggers. “These young personalities, who have become beauty and fashion ambassadors, can be harnessed to promote brands, chat in front of a camera with ease, and are free of the reluctance of A-listers to link their names to a commercial activity,” explains the report. With Twitter offering a personal analytics tool and digital forums and social media platforms providing consumers a chance to air their grievances or compliments freely, brands now find themselves being endorsed – or criticized – by their audience, which is far more authentic and relatable – also, free – than hiring a celebrity endorser.

Let’s share: the rise and rise of lightweight living

In recent times, Coca-Cola’s “Share a Coke” campaign, which adds people’s first names and positive words like “family” or “friend”  to its bottles and cans, has proved a global hit. “In 2015, the “sharing economy” is growing and disrupting the way in which individuals think of space and ownership,” says the report. As consumers crave more connections, the sharing economy is thriving as evidences by the growth of ridesharing, shared workspaces and even two-way reviews. For instance, services like Uber and Airbnb, let businesses rate customers too.

Another example of sharing is crowdfunding. Cooking to Share, a book from Greek chef Alexandra Stratou, was realized thanks to crowdfunding on Kickstarter. Not only are consumers sharing products and buying second hand good, but they are also sharing their opinions and experiences. Whether it is buying a home appliance or shifting countries, consumers are looking for others’ reviews online.

According to the report: a futuristic food hall shopping, work and living complex has just opened in Rotterdam, the Netherlands, embodying what many consumers in 2015 expect from a shopping centre. Nicknamed the “Horseshoe” after its unusual shape, it remains open for 11 hours daily, accommodating 100 fresh produce market stalls, a co-working space for entrepreneurs, restaurants, cookery school and 228 apartments, and is also part of an ambitious urban renewal project. Despite a media focus on sagging consumer demand for malls, global property advisor CBRE reveals that 39 million square meters of shopping mall space was under construction across the world’s major cities in 2014, a three million square-meter increase on 2013.

In the MENA region, shopping has moved out of the souk and under cover, and the mall has become the center of social life. The Middle East is home to huge malls including “Mall of the Emirates,” with over 100 million visitors annually. When Shake Shack, a US burger restaurant chain, was invited to open outlets in the Middle East, its CEO’s response, as reported to CNN was, “You don’t understand. We’re a cool New York urban brand. We don’t do malls.” He soon changed his mind: “The mall there is the piazza. It is the Union Square”.

The most attention-grabbing consumer segment of recent times, millennials are young people born roughly between 1980 and the mid-2000s are the first “digital natives”, according to the report. While they appear self-promoting, indecisive, and unrealistically optimistic and exhibit a lack of trust in authority, they have lived through the trauma of recessions and wars and have shown a more caring side.

They show openness to others and socially aware brands.

They are concerned about their digital footprint as evidences by the growth of disappearing messenger app Snapchat and anonymous app Whisper. They are savvy shoppers, using technology to find the best prices and prefer to buy online or shop in high street chains, which offer sustainable and environment-friendly products. Their idea of freedom and independence strays from traditional ideas with almost one third of Americans aged 18 to 34 still living at home with their parents, according to mid-2014 official figures. “Marketers have found that young adults, who exercise more than their parents did, have energy drinks for breakfast. PepsiCo responded to this change with Kickstart, a caffeinated fruit juice drink with Millennials in mind and marketed as a breakfast beverage,” says the report.

As privacy becomes more of a luxury – for celebrities and everyday consumers alike – brands will offer privacy as a selling point in 2015. In a study of the Top 10 Internet of Things (IoT) in devices, all app-controlled mid-2014, HP identified 250 security vulnerabilities and found that 90 percent collected personal information. This has led to more brands promoting themselves as privacy friendly. Even Facebook has made amendments to its privacy policy due to increasing consumer anxiety.

However, while some consumers might be anxious about giving up their privacy, many see it as a worthy trade off. Because apps and search engines know so much about consumers, gathering more information on contextual apps benefits consumers, especially when signals on commuting habits or the type of news read can make them predictive.

As the Internet brings people closer together, millions of consumers find online across-the-border shopping becoming central to their lives. “In 2015, many consumers will be making a holiday of shopping, or at least making shopping tourism a major part of their holiday by choosing a base near key shopping areas,” says the report.

For value-conscious shoppers, cross-border shopping over the Internet bypasses higher local prices. The 2014 Online Shopping Behavior Study by MasterCard showed that almost 40 percent of online shoppers in the UAE buy from foreign websites. Indicating the importance of shopping to consumers, travel website Booking.com is currently inviting users to rank destinations in terms of shopping amenities in a “Where the world shops” feature, sharing these tips with site users in a bid to prompt bookings. More travelling consumers are buying before they even step on a plane.

Virtual to real and back

“Perhaps like never before, the online world will be the defining factor for the way people buy and live the year’s shopping milestones particularly the 2015 year-end holiday season. Brands that have interacted and bonded with their customers online via contests and offers are expected to see larger sales,” says the report. As the world of real and virtual collide, consumers are looking for – and appreciating – ways and brands that allow this omnichannel shopping experience. A survey published in 2014 by consultancy firm Deloitte shows that about a third of UK shoppers used multiple channels when making a recent purchase.

Not only are brands rethinking their strategies to make shopping more convenient for their consumers, they’re also rethinking product lines altogether. Tom Mora, head of women’s design at J. Crew explains, “throughout the design process, we try to consider every aspect of the way our customers live their lives and changing mobile technology is no exception. We think about all of these details, whether it’s introducing new tech accessories for the new iPhone 6 or special interior pockets to carry the various generations of iPads or tablets”. Products are becoming even more “digital-inspired” with Amazon introducing hashtag shaped earrings and Barilla launching hashtag shaped pasta.

According to the report, in 2015, more consumers are acting on their belief that monitoring their wellbeing digitally will help them stay well. By November 2014, according to xyo.net, the MapMyRun app, tracking various physical activities and calories burned, had notched up 5.4 million downloads on Android. WebMD, used for checking symptoms, medicines and conditions, reached 6.9 million downloads on Android and a staggering 32 million consumers had downloaded the Calorie Counter app.

Though there have been debates over sleep monitoring, imperfect wearables and gadget-related syndromes, the trend of using digital devices for health purposes is only growing. This is largely due to consumers’ awareness of the benefits of exercise but the lack of motivation to actually do it. Brands that make these devices and apps have been urging the “worried well” to get wired and start recording their activity. This blend of exercise and technology also mirrors broader lifestyle trends as consumers everywhere are connected most of the time, thanks to smartphones, so it feels natural to them to blend fitness elements into their mobile cocoons.

Of branded nations
Why did Just Falafel rebrand to JF Street Food?