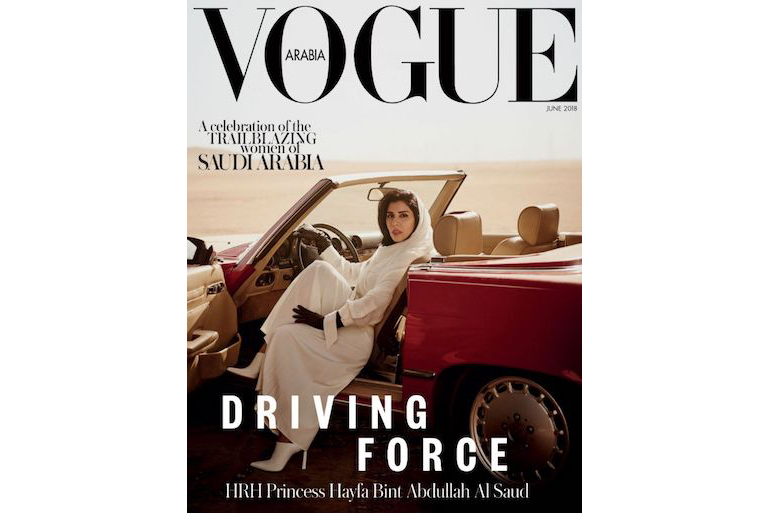 Vogue Arabia launched amidst much fanfare with its digital edition in October 2016 and first print issue in March 2017.

Condé Nast International tied up with Dubai-based publisher Nervora for the regional edition.

Since its launch, the magazine has been embroiled in controversy every now and again.

Two of its biggest controversies involve a Saudi princess.

In April 2017, just one month after the launch of its first print edition, Vogue Arabia fired its editor-in-chief Saudi Princess Deena Aljuhani Abdulaziz.

Now, a little over a year later, it has put HRH Princess Hayfa Bint Abdullah Al Saud sitting in a car on the cover of its Saudi-edition. The cover line “Driving Force” is indicative of the ban on Saudi women driving being lifted on June 24.

So, what’s the issue?

Users on social media have questions and criticized the choice of putting a Saudi princess on the cover – especially a Saudi princess whose family has detained and imprisoned female rights activists in the Kingdom under various charges including treason, as recently as May.

READ: Do these moves mean the death of fake news?

Ironically, in the interview with Vogue Arabia, the princess says, “My father had a saying: ‘We are from the people, and the people are from us.’ We knew we had a lot and we were privileged, but at the same time we had to remain down to earth and humble.”

In a statement to the BBC, Vogue Arabia editor-in-chief Manuel Arnaut defended the magazine’s editorial decisions, saying that the publication “highlights and discusses key issues related to womanhood in the Arab world” and said using Princess Hayfa “helped magnify” their message.

At the time of writing this, Vogue Arabia has not responded to Communicate’s request for comment.

In the meanwhile, here’s a timeline of Vogue Arabia getting it wrong:

The first-ever print edition featured half-Palestinian, half-Dutch model Gigi Hadid, sparking criticism from readers and social media users for featuring a white face and not an Arab – especially since this is the first issue.

Just a month after the first print edition, rumors hit the market that its editor-in-chief Saudi Princess Deena Aljuhani Abdulaziz has been fired.

MUST READ: TV or Digital: who’s the King in Ramadan?

In a statement, she said, ”I stand behind my values and vision for Vogue Arabia and I refused to compromise when I felt the publisher’s approach conflicted with the values which underpin our readers and the role of the Editor-in-Chief in meeting those values in a truly authentic way.”

Can’t be in Saudi during Ramadan? You can watch the prayers live thanks to…
Du vs Etisalat vs beIN: How can GCC viewers watch the FIFA World Cup