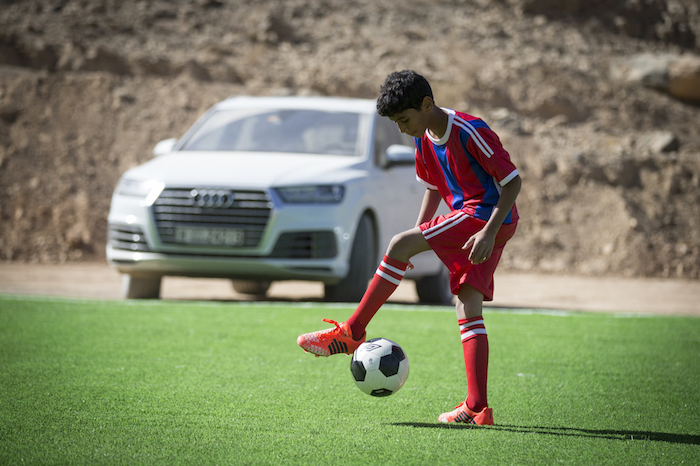 This is the third challenge to be delivered by Audi Middle East since initiating the ‘Audi Challenges Arabia’ campaign in the region. The first challenge took place during August 2015 at the Dubai Autodrome with the ‘Audi R8 adrenaline’ challenge. The second challenge was the ‘Audi Elevation challenge’, where an Audi RS 7 raced the elevator of the tallest building in the world – Burj Khalifa.

More than 4,000 challenges have been submitted since the start of the Audi Challenges Arabia campaign. The third successful challenge to be made into reality came from an Audi fan, who submitted the request to light up a football pitch. Audi Middle East accepted the challenge, but also helped a 13-year-old Omani boy take a step forward towards his dream to become a professional football player.

Zakaria Daoud, who lives in a remote village, located in the mountains of Oman, with no proper paved roads, dreams of becoming a professional football player, yet the village lacks any facilities such as a football pitch where he can develop his talent and play regularly with his friends.

Audi Middle East extended the challenge of lighting up a football pitch and surprised the child by building a new football field for Zakaria to practice his favorite game with his friends. Neighboring villages will also benefit from the new pitch.

With the help of 22 new Audi Q7’s, the pitch was built in the mountainous area of Al-Rustaq Governorate, which is located 1,500 meters above sea level and can only be reached by a 40 kilometer rocky off road route.

The second part of the challenge was completed with the help of Audi Q7’s Matrix LED technology, which completely illuminated the football pitch and surprised the village children with their new pitch.

The story of the challenge can be seen on the Audi Middle East’s microsite www.audichallengesarabia.com, along with past challenges.