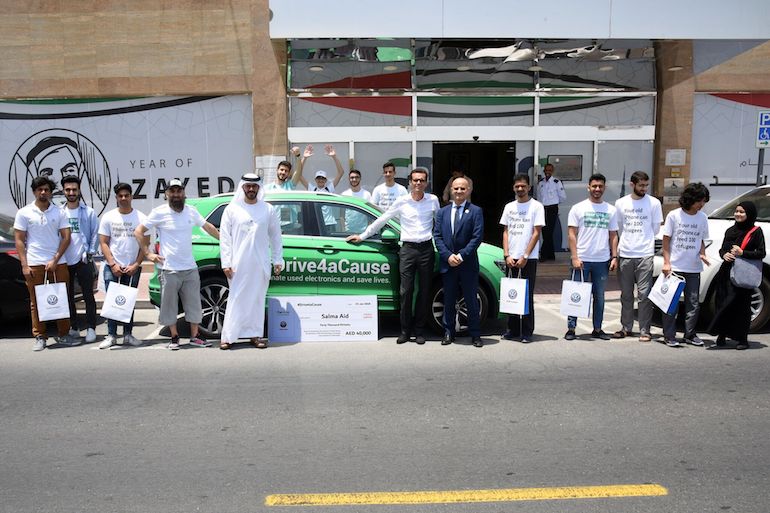 Over 40,000 AED has been donated to Salma Aid – a Sheikh Mohammed bin Rashid initiative – following the successful #Drive4aCause campaign that encouraged members of the public to donate their unwanted electronic goods for a worthy cause during the Holy Month of Ramadan.

Devised by Melltoo, the online marketplace that sells used and unwanted items, and in collaboration with Volkswagen Middle East, the #Drive4aCause initiative took place during Ramadan, and due to the positive response was continued throughout the rest of June.

READ: How many Middle East online users are celebrity networkers?

The campaign called upon members of the public to generously donate their unwanted electronics to raise money for Salma Aid, the Sheikh Mohammed bin Rashid initiative that provides food relief for refugees and humanitarian crises globally.

The campaign reached 12 communities at nine different locations across the Emirate of Dubai, and over 30 student volunteers stopped off at each location in a green Volkswagen Tiguan to collect over 400 donated items including laptops, tablets, game consoles, cameras and other electronic accessories.

Melltoo helps customers in the UAE sell their used items without the hassle of meeting strangers. Donated items were listed on the platform, and Melltoo found buyers, picked up and delivered the items and collected the funds. 50% of sale proceeds were donated to Salma Aid, alongside Volkswagen Middle East donating an additional 50% of the total costs raised, meeting the 40,000 AED target.

Thanks to the #Drive4aCause initiative, Melltoo and Volkswagen Middle East were able to provide 50% of the total proceeds raised to buy over 4,000 meals for the refugees at Salma Aid.

Continue Reading
You may also like...
Related Topics:Melltoo, volkswagen