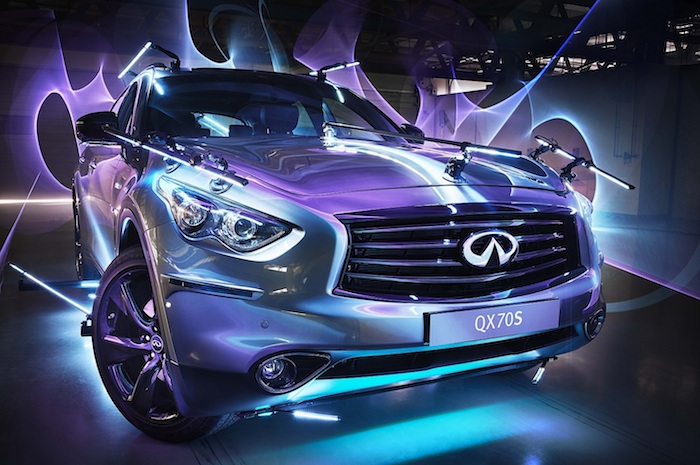 Infiniti in the Middle East, together with its strategic partner in the Kingdom of Saudi Arabia Al Ghassan Motors, delivered a performance of light painting with cars – ‘Inspired Light by Infiniti’ – to its customers in Riyadh.

Held at the Al Reem track on the March 21, Inifinti engaged with the Kingdom’s local community through a day of activities that included track driving, off-roading and a wildlife safari.

The Al Reem track activity concludes the nation-wide campaign, ‘It’s Time for Infiniti’, which utilized Infiniti vehicles to engage with Saudi nationals beginning with Jeddah in 2014 and more recently, in Riyadh and Al Khobar. Spanning the past five weeks, Infiniti’s Facebook, Instagram and Twitter platforms highlighted the video diaries of five families spread who hosted Infiniti vehicles and toured their favorite locations around the city. Details of the location and experience were documented via the hashtag #ItsTimeForInfiniti.

The day’s activity concluded with a gala dinner where the world’s leading light painter, Patrick Rochon and his team put on a display of ‘Inspired Light by Infiniti’.

Sheikh Ghassan A H Al Sulaiman, President of Al Ghassan Motors, says in a press statement, “As Infiniti’s strategic partner in the region, we are committed to giving our customers the best Infiniti has to offer. Through our facilities in Jeddah, Riyadh and Al Khobar, we are able to offer the entire Infiniti range to our customers. Additionally, initiatives like the Al Reem track activity provide us with the perfect opportunity to interact with our customers here in the Kingdom and really immerse them in the brand. We remain committed to engaging with our customers to ensure that we provide them with a real feeling of what the premium Infiniti Al Ghassan experience is all about.”

Light painting, a genre of art that requires only darkness and light to create any number of shapes, illustrations, patterns, moods and themes were brought to life using cars. Three QX70 vehicles were transformed into moving light painting brushes to create giant colorful images.

The performance concludes Infiniti’s aim of ‘lighting up’ the Kingdom of Saudi Arabia through ‘It’s Time for Infiniti’, in line with its expansion and launch of new showrooms and facilities. Over the course of the year, the brand engaged with Saudi families spanning Jeddah, Riyadh and Al Khobar highlighting the heritage and culture of Saudi Arabia through Infiniti vehicles.