In the age of digital transparency and higher consumer expectations, it seems like brands don’t have a choice but to be authentic. However, authenticity is more of a concept than something tangible; it relies more on subjective consumer perception rather than an objective method of measurement. Which is why the survey asks consumers to define authenticity through Twitter. The team behind the research admits that, to their surprise, users’ definition of authenticity fell “within a strikingly consistent range of definitions”. Yet, the research team organized the 12,000 responses into seven “authenticity anchors” – or indicators, – which were then compared with ten “traditional benefits” of the top ten traditional corporate behaviors, half of which are also authenticity anchors; indicating that being transparent has a tangible business benefit for the brand.

The study also comprises an “anger meter” to understand the issues that ire consumers. Globally, the two issues that anger consumers the most center around ‘food’ and ‘data privacy’, with 75 percent in the UAE saying that foods that are produced unsafely or in an unsanitary way; and 70 percent in the UAE saying that companies that fail to protect their information, anger them the most. With a global average of 72 percent saying that use of low-quality ingredients in food when promoting a high-quality product is what angers them, it comes as a surprise that McDonald’s emerges as the most authentic brand globally. Geoff Beattie, global head of corporate affairs at Cohn & Wolfe and co-author of the report, explains that “it comes down to the brave decisions that the company has taken to be much more transparent” – whether that’s putting additional information on their packaging or answering – at least promising to answer – consumers’ questions honestly. Yet, the fast-food giant’s sales have been dropping consistently, with worldwide sales down by 1.8 percent and 12.6 percent in the Asia Pacific, Middle East and Africa regions in January 2015, according to Reuters. However, Beattie attributes this downfall to the competitive nature of the fast-food industry and not authenticity issues with the brand. Another surprise on the list is Google ranking eighth globally, despite 71 percent stating the second-most angering issue as “sell your personal information to other companies”. But in Beattie’s opinion, consumers don’t associate Google with the data privacy. “People use Google all the time and 99 percent of the time they get what they want, so Google is always fulfilling its brand promise. Any concerns of privacy are overcome by utility,” he says. 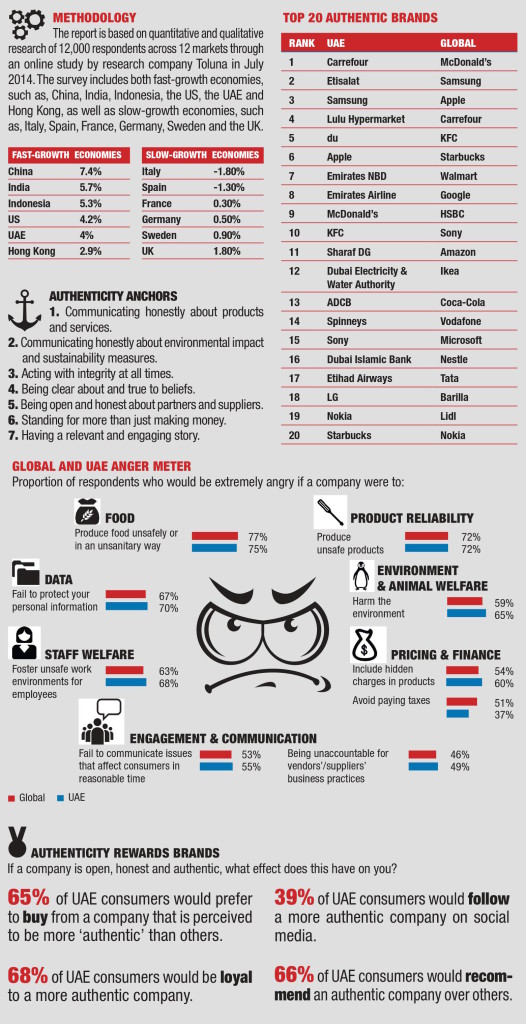 Considering the study was unprompted and respondents named brands of their own accord, it might seem that advertising spends have something to do with the top-of-mind recall that these brands have with their consumers. However, Beattie insists that this is not the case, pointing  to Germany, where local brands and supermarkets – that barely spend on advertising – crop up on the list and not big names such as BMW or Mercedes-Benz. In the UK, too, three out of the ten brands on the list are local supermarkets. However, Beattie does admit, “inevitably, we can’t say that we don’t have any contamination and we do need to do more investigation into why people named these companies”.

Interestingly, out of the 12 countries surveyed, the UAE seems to have a rather positive attitude, with 18 percent agreeing that “big businesses are very honest and transparent”.

If this seems like a small number, turn to Europe, where only one percent in Germany, two percent in France and three percent in the UK, Spain, Sweden and Italy agree with the aforementioned statement. Beattie explains that fast-growth industries generally showed a more optimistic outlook throughout the study.

Sue Unerman, chief strategy officer at MediaCom, explains in the report, it’s much harder to avoid hearing about corporate scandals due to the ever-pervasive nature of digital, making consumers more aware and hence angrier. And as technology makes consumers’ lives easier, their expectations increase, so any shortfall in meeting these expectations is met with anger.

From the 2013 study, it was clear that authentic brands are the ones that produce products and services that do what they say on the package; match words with actions; open up, even if doing so could be detrimental in the short run; and own up to issues. Given this understanding of authenticity, it does make one wonder how authenticity works – or should work – for tobacco and certain beverage brands. “They should follow the example of Coca-Cola or McDonald’s. If they have confidence in their product, they should be open about how it’s produced, what they do to minimize the health dangers and how they produce and manufacture their products,” suggests Beattie.

However, irrespective of the ingredients and manufacturing practices, tobacco and certain beverage brands’ products are harmful – at least, relatively – by their very nature. Yet, Beattie asserts that “the industry needs to become much more transparent and open with people about the health risks [of its products].”

Whether it’s consumers’ awareness or ease of lifestyle that has made them more conscientious, it is clear that their expectations – and demands – from brands have increased and it doesn’t seem like brands have a choice but to be transparent – willingly or otherwise. After all, as Beattie says, “brands don’t belong to companies anymore; they belong to their consumers.”