A collaboration between Adidas UAE and the renowned local Pakistani restaurant, Ravi has taken the internet by storm. The mashup includes a limited-edition shoe dedicated to iconic Pakistani eatery Ravi in an effort to celebrate community-focused restaurants in cities around the world.

The Adidas Originals Superstar has launched a limited-edition shoe featuring the beloved Pakistani joint in the UAE, Ravi Restaurant. Titled 'Superstar Ravi' the collection is inspired by the Pakistani heritage signified by the use of the same green as the restaurant's logo and a custom sock-liner with a hand-drawn map explaining the meaning of 'Ravi,' a river in north-eastern Pakistan. The heel tab branding includes the year Ravi opened alongside the name in English and Arabic on either shoe. The restaurant owners hand-selected six dishes that have been added to the tongue of the sneakers with English on one side and Arabic on the other. Each pair of shoes are delivered in a special edition takeaway style box. 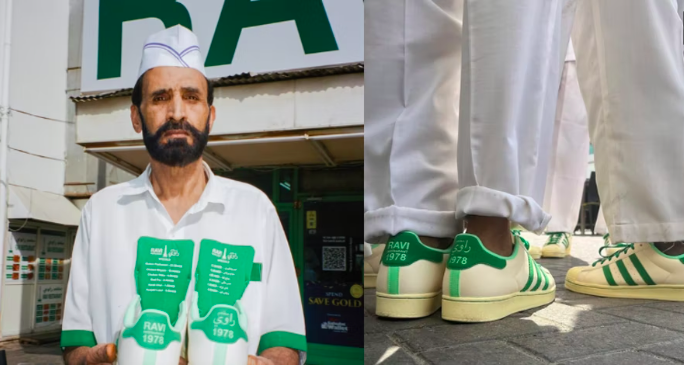 “My family has worked so hard to bring Ravi to where it is now, it has become more than just a restaurant with staff and customers, it has become a home that many grew up with. To say that Ravi had a humble beginning and is now representing Dubai as a key city with Adidas is a milestone to celebrate,” said Ravi founder Chaudary Abdul Hameed in a released statement.

“This unique collaboration represents the ability of food to be able to transcend physical borders and create cultural bonds, metaphorically transporting us to somewhere new or a taste of home for many of the diasporic communities found in Adidas key cities. Through the ‘adilicious’ series, every restaurant brings their own unique culinary perspective and story to the table,” Adidas said in the statement.

In a push for community-focused marketing, this collaboration is a part of a series of sneakers celebrating iconic eateries in 11 cities worldwide. The shoe will be available across Adidas stores and online from June 23rd.