Ahead of FIFA World Cup Qatar 2022™, Adidas reunites its global football family including Morocco right back Achraf Hakimi to celebrate why the world cup is so special. The brand’s World Cup campaign kicks off with a film showing the world’s best players and mega-fan Stormzy getting ready for the tournament, with further brand activations planned across the month. 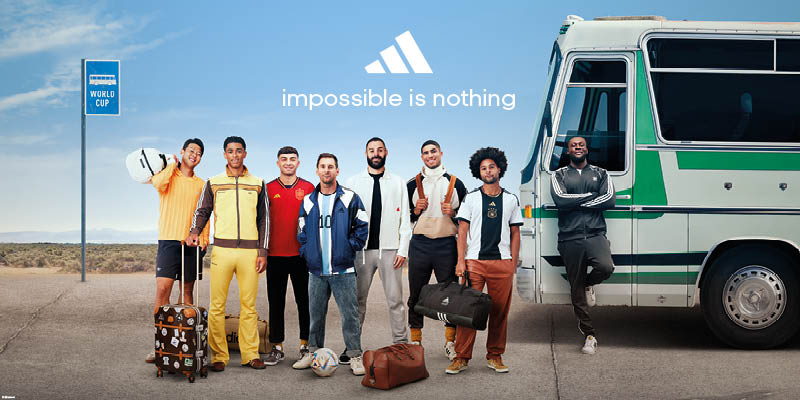 Ahead of the FIFA World Cup Qatar 2022™, Adidas unveils the next chapter of its Impossible is Nothing story with its global football family. The brand kicks off a month-long campaign with a Family Reunion like no other – featuring Lionel Messi, Karim Benzema, Achraf Hakimi, Son Heung-Min, Jude Bellingham, Pedro ‘Pedri’ González López, Serge Gnabry, and Stormzy.

Channeling the special essence of the tournament, the playful spot celebrates the unified joy of football which brings together players and fans from all over the world. With a selection of the world’s greatest football stars unexpectedly reuniting and displaying their excitement and unique pre-tournament preparations, the film is inspired by the attitude that when football is everything, the Impossible is Nothing.

Also featuring and narrated by football superfan Stormzy, the film combines football culture, world cup nostalgia, and unique player personalities – all with a shared love for the game. Designed to be watched again and again, each scene features subtle nods to memorable moments, players, and places to help build anticipation for the endless possibilities of the month ahead. These include framed family photos, fridge magnets, postcards, cross-stitch hangings plus so much more.

Florian Alt, VP of Global Brand Comms at Adidas, speaks on The Family Reunion: “There is a rare moment, once every couple of years, at the beginning of the World Cup when it truly feels like impossible is nothing. A time when players and fans come together united by the belief that they will bring the trophy home.”

“During the next month we’ll see new players break onto the scene, an underdog beat the odds, unbelievable goals, and widespread celebrations taking place across the globe. It’s precisely that spirit that our campaign hopes to inspire in fans around the world.”

Further to this, with a full month of unmissable moments undoubtedly ahead, Adidas will continue to celebrate its global football family throughout the tournament with iconic player moments, global social media activations and the creation of the 'Al Rihla Arena' - an official Adidas fan zone on-the-ground in Qatar. The immersive experience will give fans the opportunity to watch every game live, test their skills on the specially designed pitch, be in with a chance of meeting their favorite football legends and capture a range of content through augmented reality.

Football fans across the GCC can also enjoy six Adidas fan zones across Dubai (Adidas Family House and Al Rihla Arena at Official BudX FIFA Fan FestivalTM, Dubai Harbour), Qatar (Al Bidda Park), and Saudi Arabia (The Boulevard – Riyadh, The View Mall – Riyadh and Jeddah Park – Jeddah). The Adidas space will see a massive screen with live matches broadcasted and a packed schedule of immersive activities, there will never be a dull moment for fans as they meet their favorite legends and even get an opportunity to play with them.