The 14th annual Arab Youth Survey commissioned by Asda’a BCW finds 57% of the respondents saying that the UAE was their model nation, driving the country’s popularity to its highest in 11 years. The report identifies six distinct themes – Identity, Livelihood, Politics, Global Citizenship, Lifestyle, and Aspirations – the findings reveal a generation at a crossroads, confronted with the dilemma of preserving their traditional culture and values on the one hand, and embracing modernization and reform on the other. 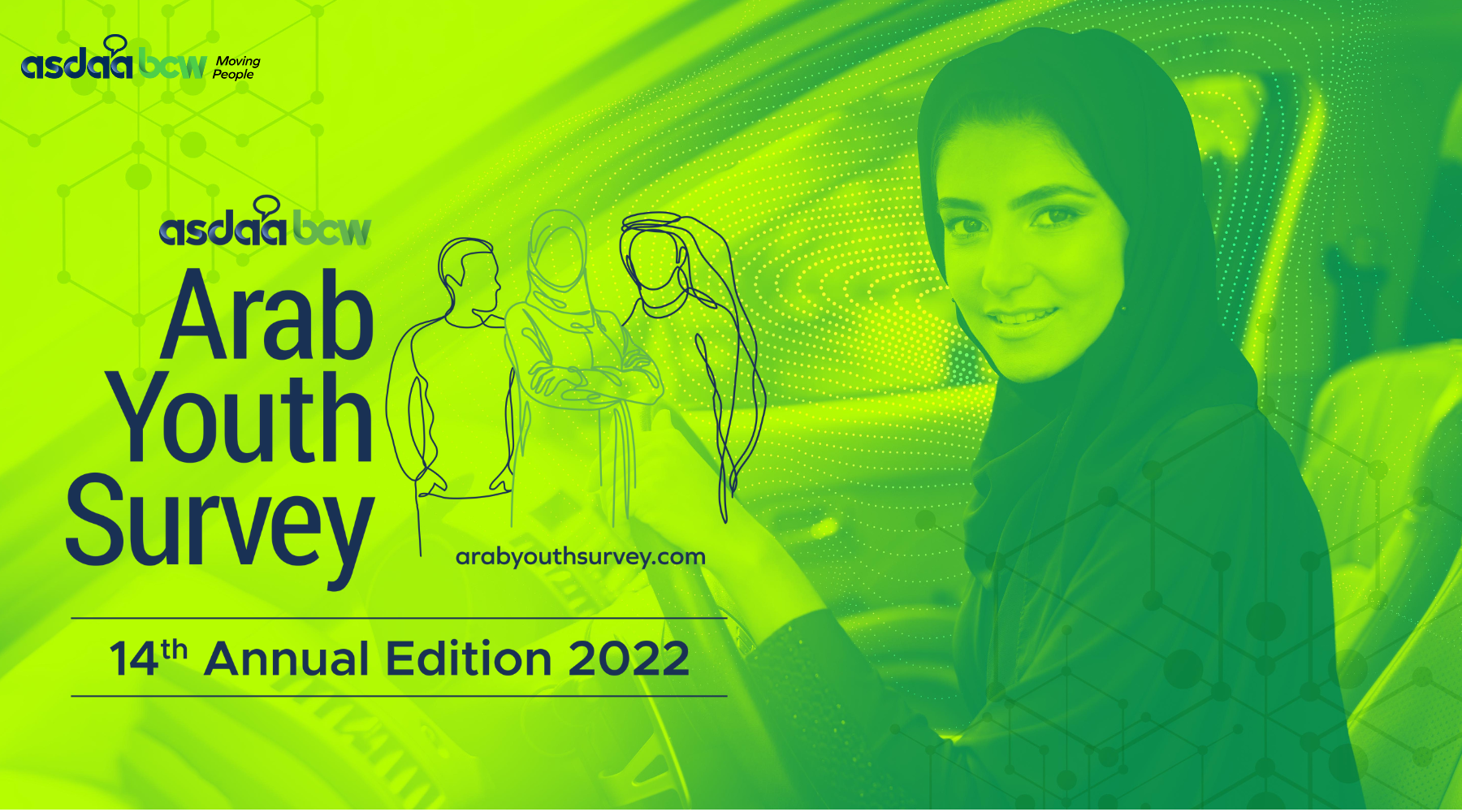 This year, Asda’a BCW, MENA based communications consultancy, commissioned IDS Research & Consultancy to conduct face-to-face interviews with 3,400 Arab youth from May 13 to June 16 in 50 cities across 17 Arab states, with the sample equally split between men and women.

Through the survey, they found six key themes that influenced the perspectives of the young across the GCC, North Africa, and Levant regions. 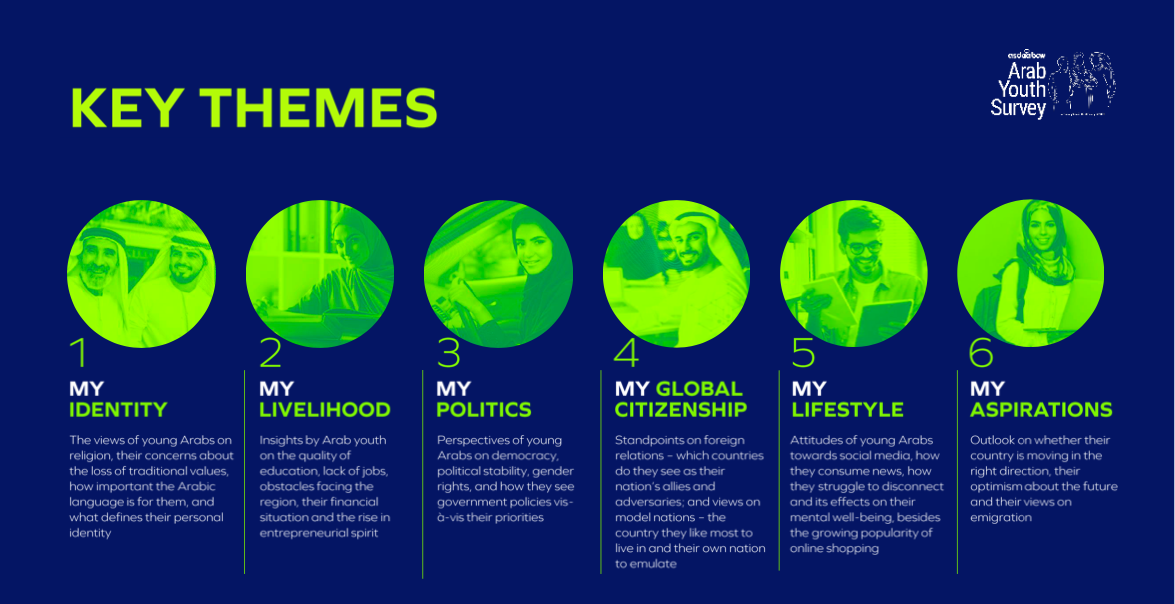 Once again, Arab youth have named United Arab Emirates (UAE) as the country they would most like to live in and their own to emulate for the 11th straight year. Nearly two-thirds (57%) of Arab men and women aged between 18 and 24 identify the UAE as their top choice, ahead of the United States (24%), Canada (20%), France (15%), and Germany (15%).

The popularity of the UAE as a place to live is at its highest point since the Arab Youth Survey began asking the question in 2012. That year, 33% of respondents said the UAE was the country they preferred to live in, followed by France and the US.

Arab youth say their faith is the cornerstone of their personal identity and prioritize preserving the Arab world’s religious and cultural traditions over creating a more globalized society. And nearly two-thirds say their legal structures should be based on Sharia law. 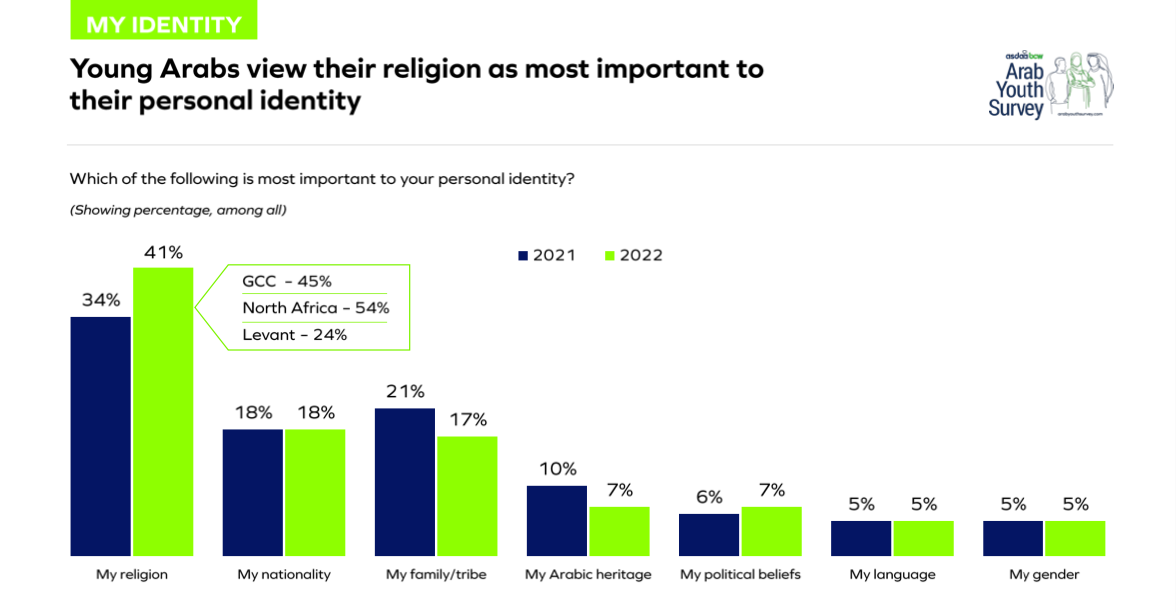 At the same time, a large majority of young Arab men and women say religion plays too big a role in the region and want religious institutions to reform. In contrast, 73% of Arab youth overall (78% in the GCC, 76% in North Africa, and 65% in the Levant) say that religion plays too big a role in Middle Eastern life, and more than three-quarters (77%) say that religious institutions in the region require reform. 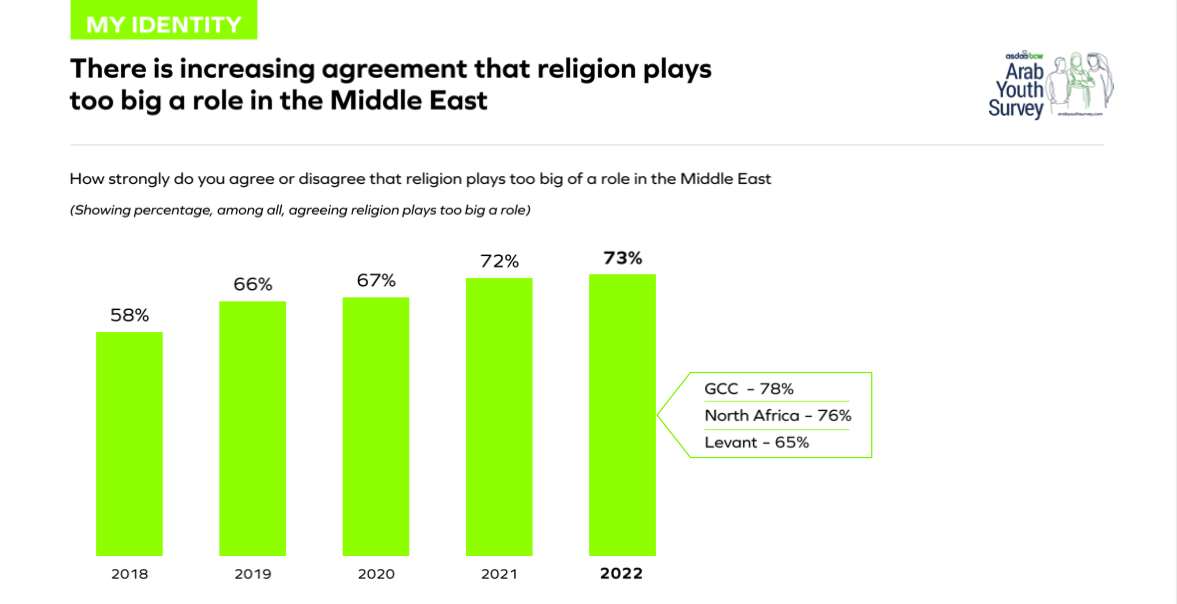 Jobs and living expenses have been their top two concerns every year since the study began, except in 2016 and 2017, when young people cited the rise of Daesh and the threat of terrorism as the region’s biggest challenges.

More than a third (41%) say they are struggling to meet their basic expenses (this rises to 63% in the Levant), and more than half (53%) say they receive financial support from their family. However, the findings point to significant regional variation, with only 16% in the GCC saying they struggle to pay their expenses in full. 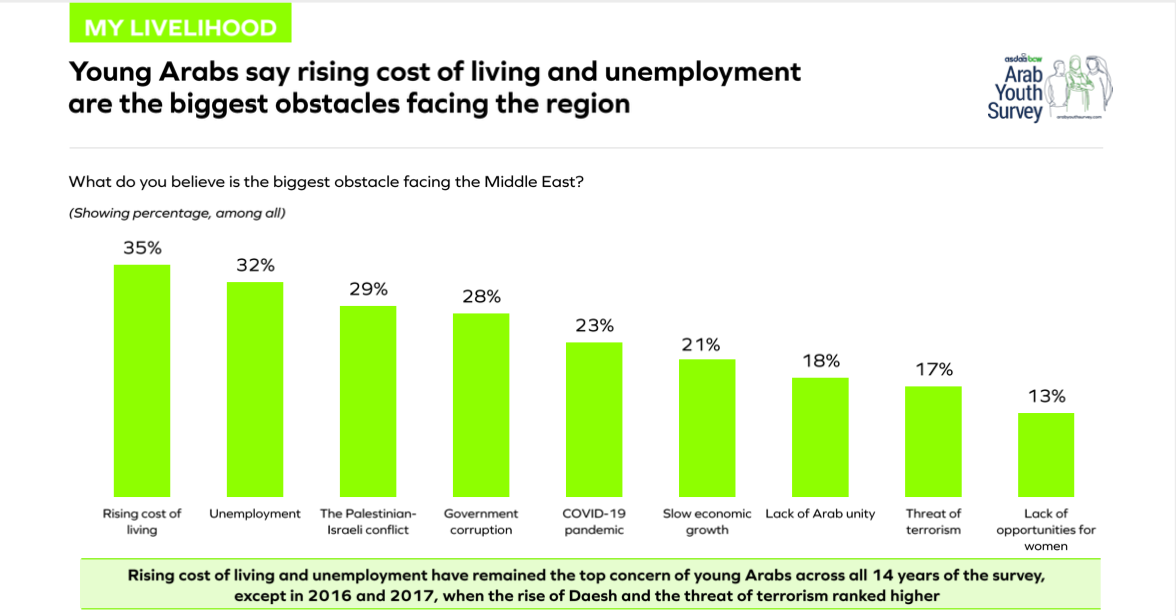 Understandably, rising living costs are impacting mental health, with young people citing financial difficulties as their main source of stress. Twenty percent overall said their difficult financial situation was their biggest source of mental strain, bigger than family issues and personal relationships. This rises to 30% in the Levant countries and Yemen. 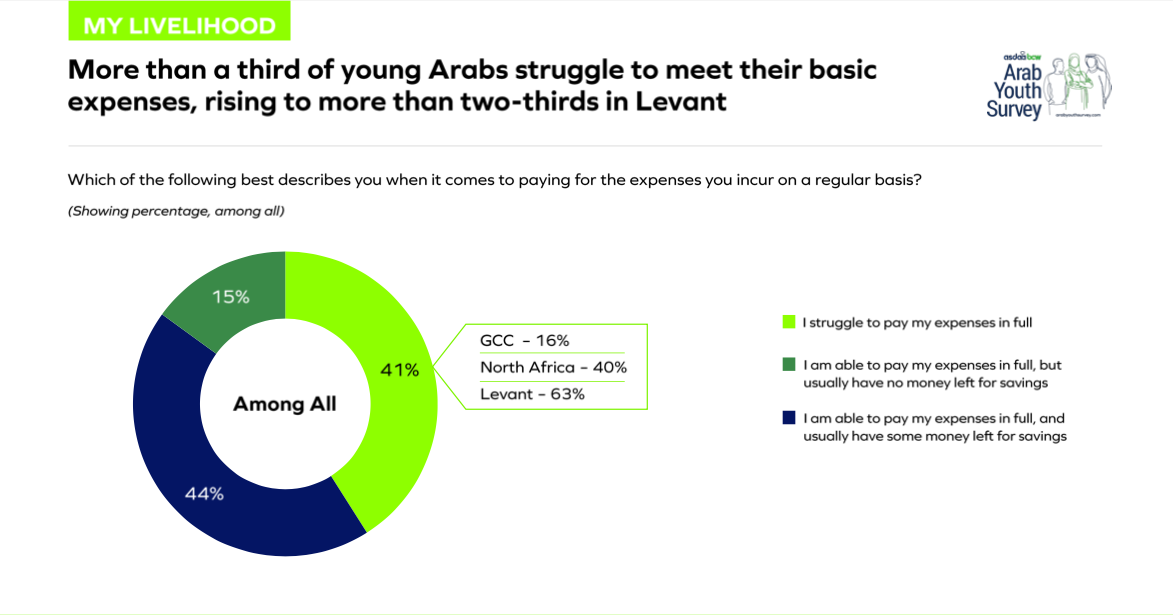 Young Arab men and women in the Middle East & North Africa, a generation that has lived through the Arab Spring, the rise and fall of Daesh, and the Covid-19 pandemic, are charting a new course as they contemplate their future and now prioritize stability over democracy.

Most of the so-called Arab Spring generation, which entered adulthood after the momentous events of the early 2010s, say they have more freedoms today because of the protests, that their voice matters to their leadership, and that women have equal rights. But a majority in the GCC (57%), North Africa (62%), and the Levant (72%) say that democracy in the region will never work. 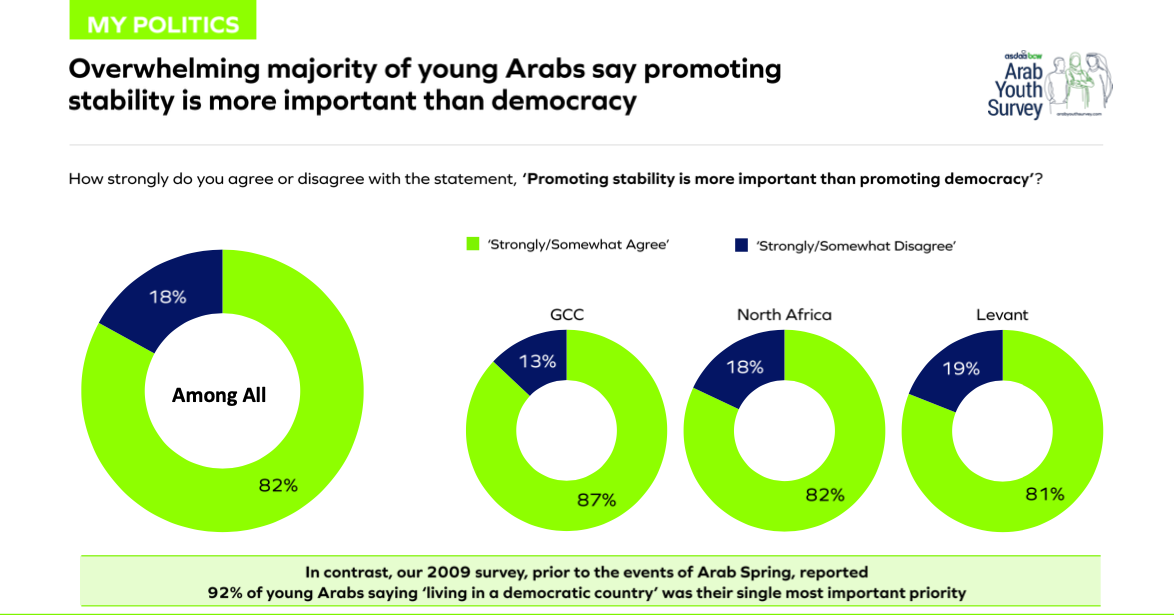 More than eight in 10 (82%) in all three regions believe that today, promoting stability is more important than promoting democracy. Better policymaking to address persistent material concerns like jobs, education, and rising living costs is also high on their list of demands.

While 87% of Arab youth in the GCC say their government has the right policies to tackle the issues most important to young people, less than six in 10 (59%) in North Africa, and barely a fifth (21%) in the Levant say the same way. Against this backdrop, more young people would prefer to work for themselves or with their families (28%) than for the government or the private sector. 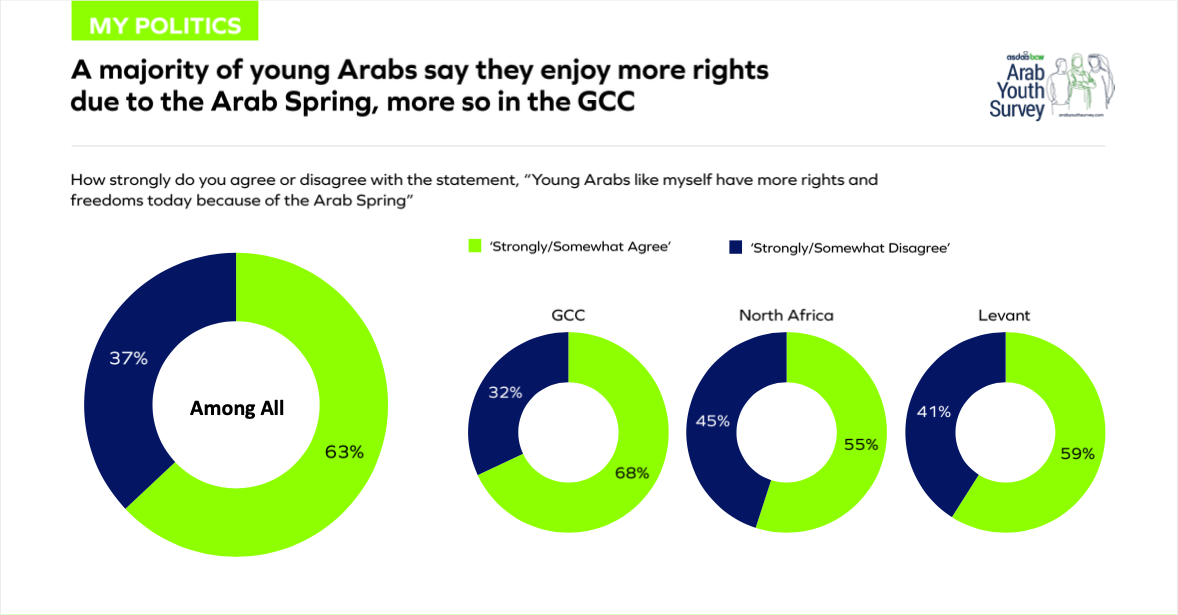 In a further sign of today’s shifting global allegiances, Arab youth now view China, Turkey, and Russia as stronger allies of their country than historical powerbrokers the United States, the United Kingdom, and France. Three-quarters (78%) describe China as either a strong ally or somewhat of an ally of their country, followed by Turkey (77%) and Russia (72%). The UK and France were ranked joint fourth in the study with 70%, followed by the United States, which was rated an ally by two-thirds (63%) of those interviewed. 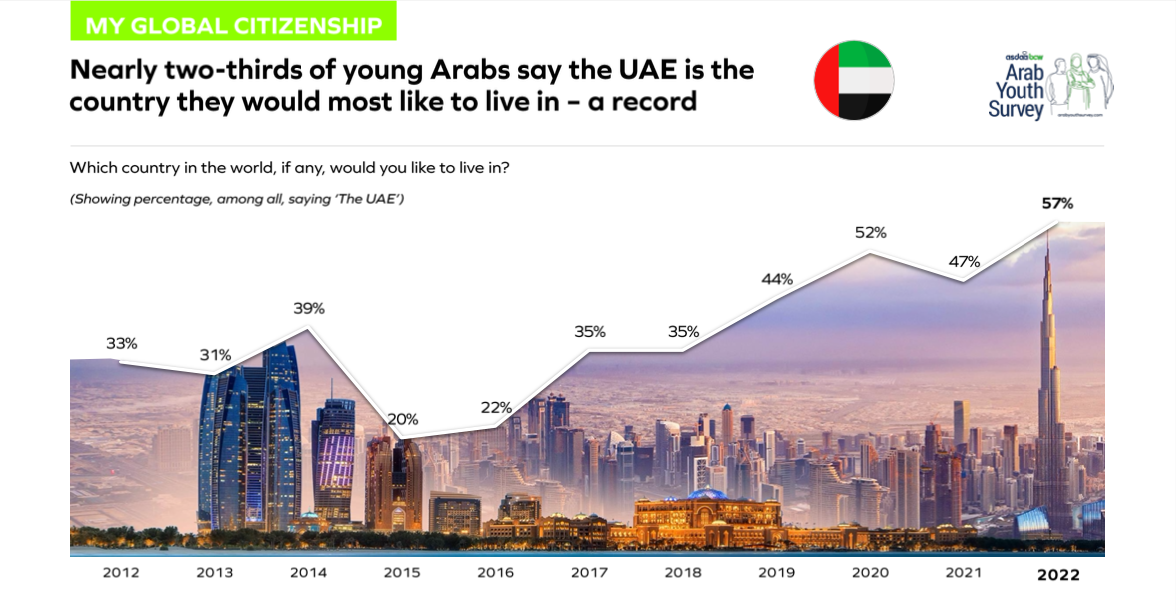 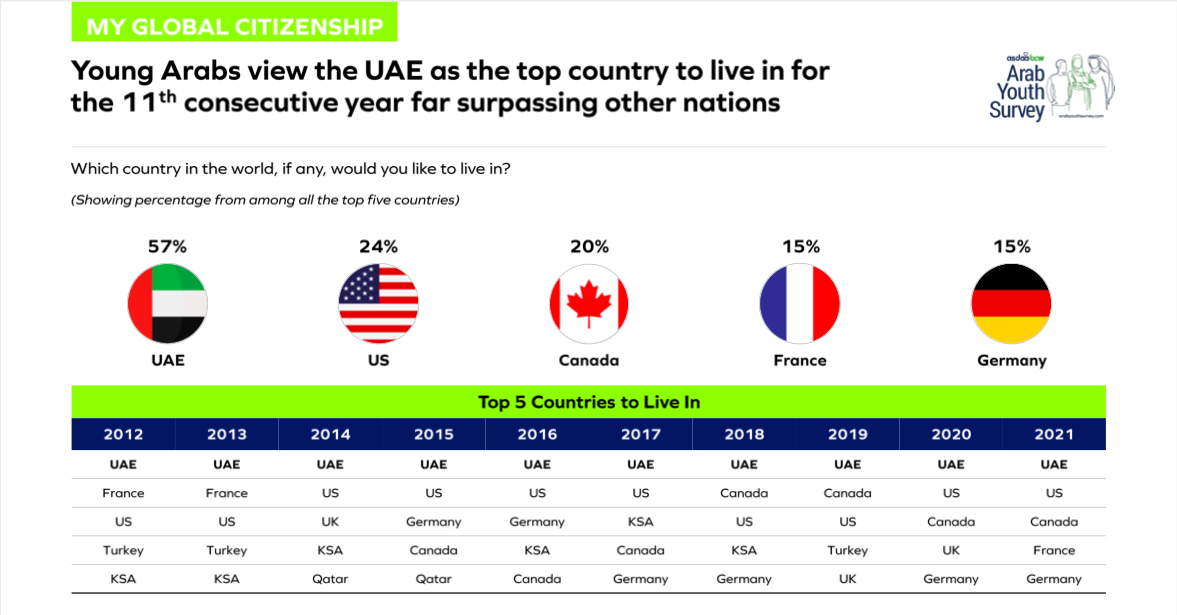 The number of Arab youth saying they shop online has nearly doubled in five years, and almost all young GCC citizens say they shop via a social media app or website at least a few times a month. Social media habits are changing, with half of the Arab youth now saying they use TikTok daily, more than double the number who said they used the app in 2020 (21%). Today, TikTok is the fifth-most popular social media app after WhatsApp, Facebook, Instagram, and YouTube. 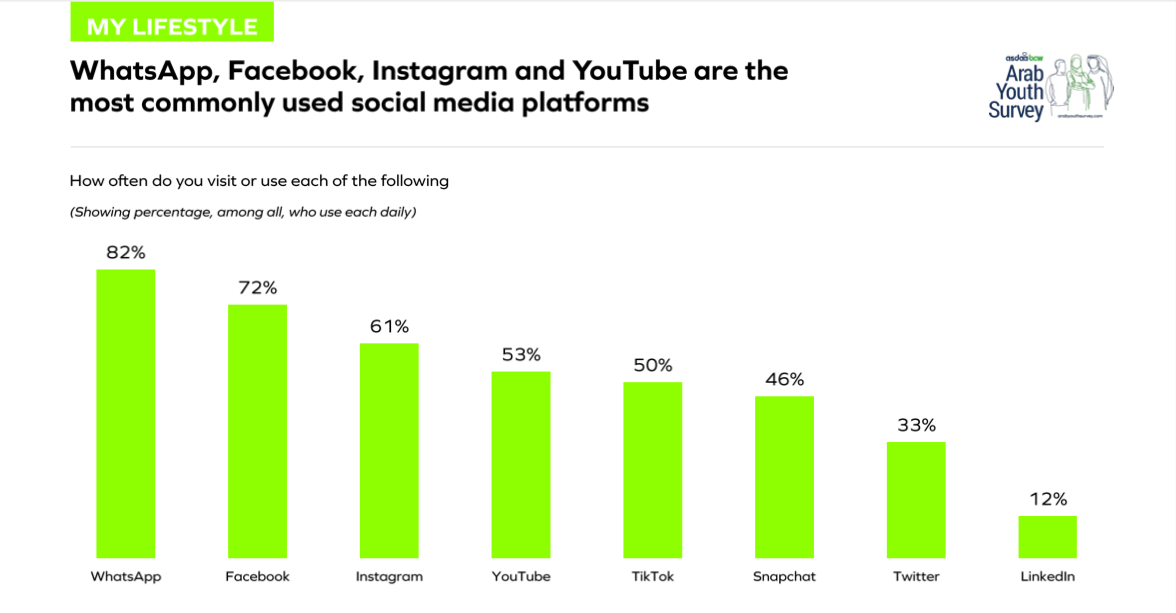 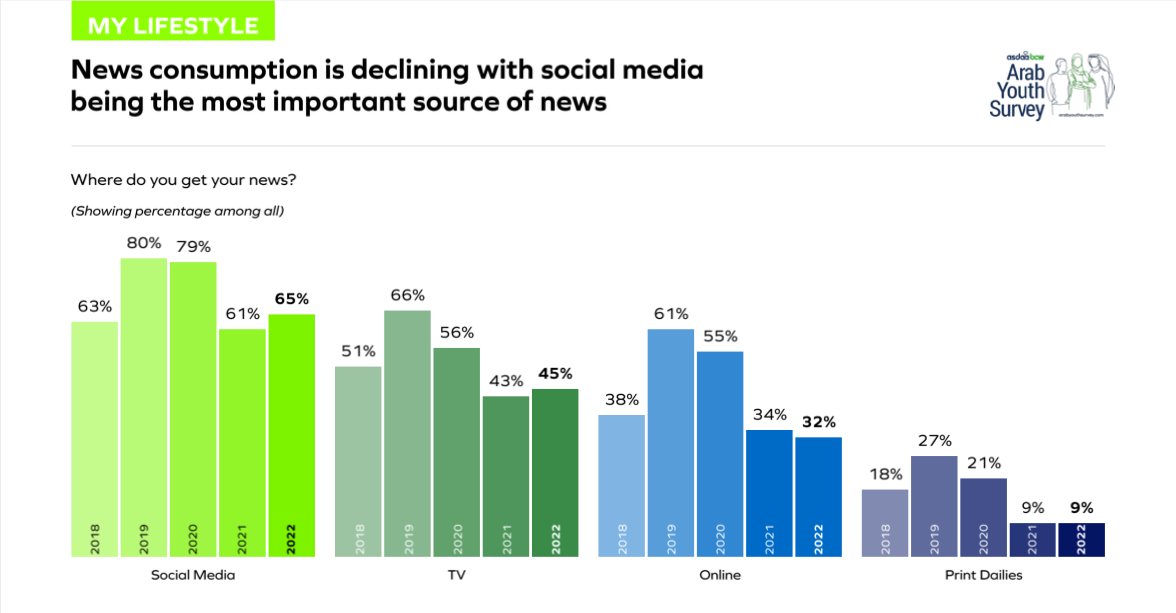 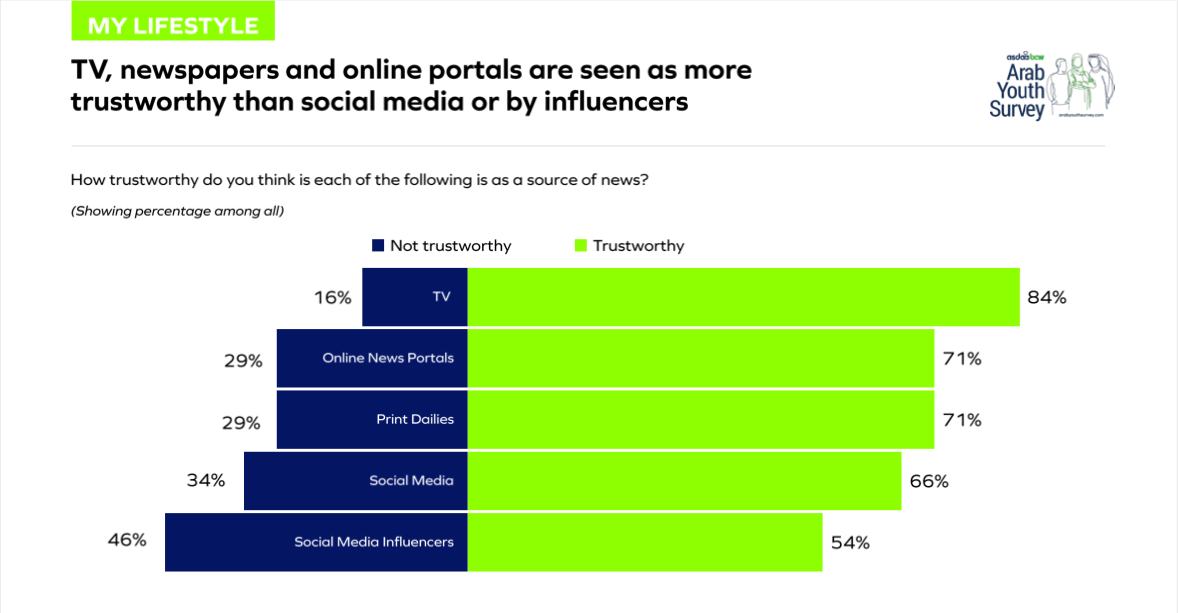 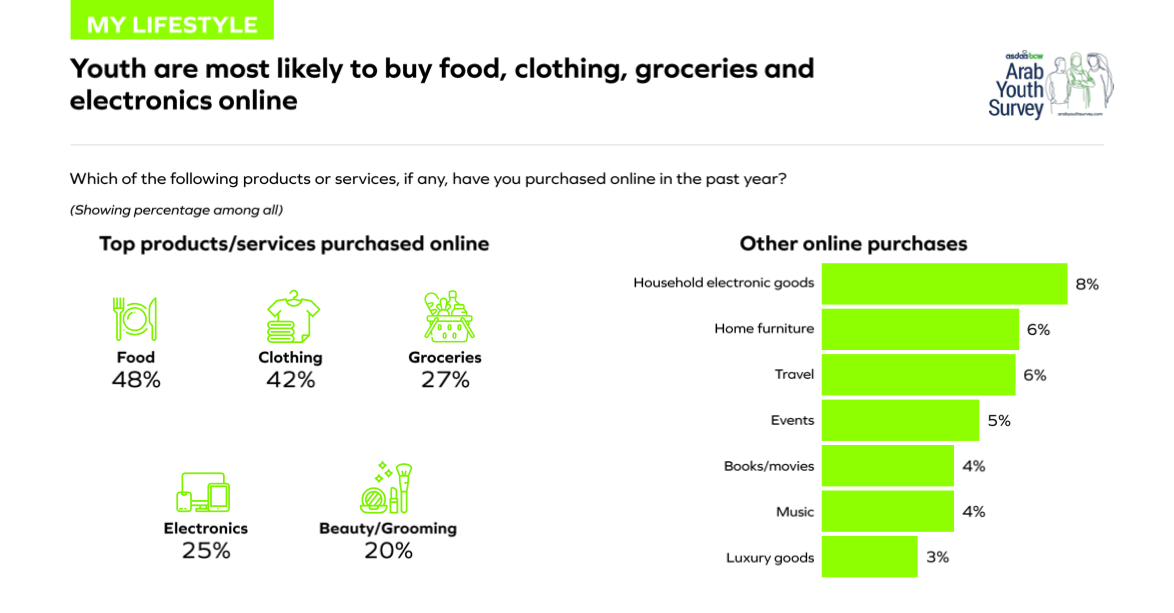 The apparent knock-on effect of the challenging economic conditions in different parts of the Arab world is an increasing desire to seek a new life abroad. When asked about their priorities over the next 10 years, the top priority of Arab youth is to finish their education, second is to embark on a successful career, and third is emigrating to a new country. 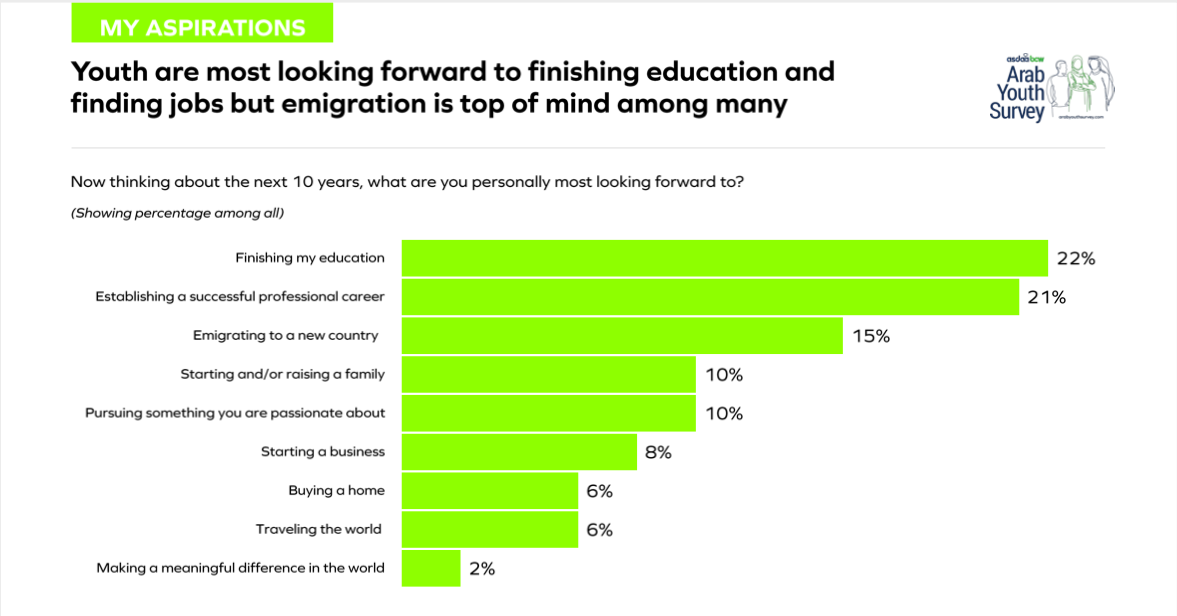 The top five attractions of the UAE are its growing economy (27%), its safe and secure environment (26%), its generous salary packages, and the wide range of work opportunities it provides (both cited by 22% of interviewees), and the country’s effective leadership (17%).

The UAE’s respect for the region’s cultural traditions, the quality of its education system, the ease of starting a business, and the UAE’s low taxes were other attractions.

Sunil John, President, MENA, BCW, and Founder of ASDA’A BCW, said, “As the region’s model nation for the 11th straight year, the UAE continues to be a beacon of hope and opportunity for young Arab men and women across the Middle East & North Africa.

“The enduring popularity of the UAE is a testament to the visionary leadership of the UAE, which staged one of the most successful World Expos in the event’s history – despite the global disruption caused by the Covid-19 pandemic – and is now preparing to host the UN Climate Change Conference (COP28) in November 2023.”

John added, “What is perhaps most telling is the fact that the UAE scores highly on all the issues that Arab youth said were most important to them in our research, such as job opportunities, education quality, and the preservation of the region’s cultural traditions and values.”