Travel and sportswear brands continue to dominate the rankings yet another year in the UAE while homegrown brands occupy the top three ranks in KSA. 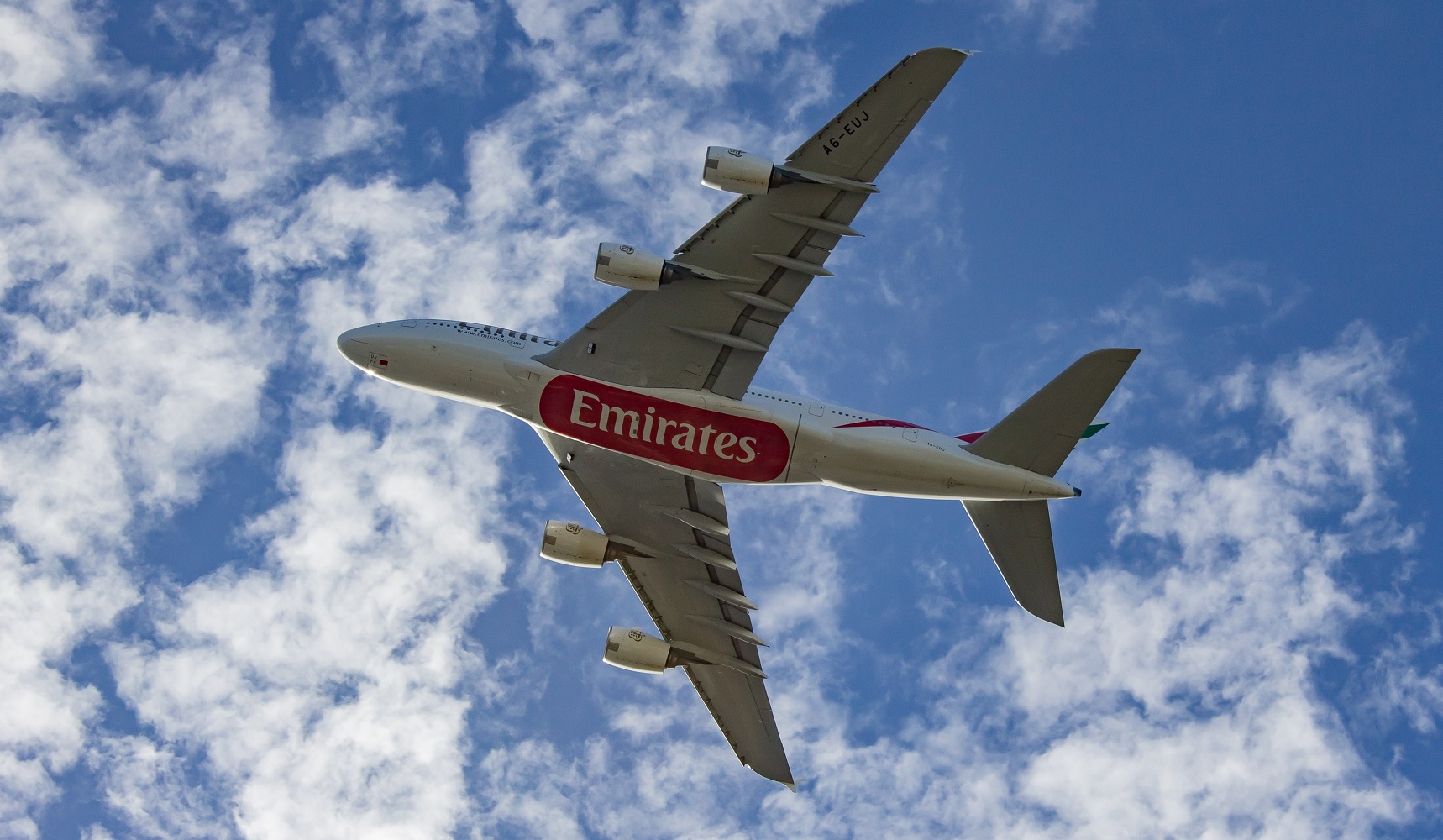 YouGov analysis reveals Emirates tops the UAE’s Recommend Rankings 2022 with a Recommend score of 91.8. With the greatest improvement amongst the top ten brands (of +4.2), the country’s flag-carrier airline retains its position as the most recommended brand among customers in the UAE.

The rankings are based on YouGov BrandIndex’s positive Recommend score, which measures the percentage of a brand’s customers who would recommend it to a friend or colleague. Every brand in these rankings has a minimum sample of 300 and has been tracked for at least six months, with all scores being rounded to a single decimal place. 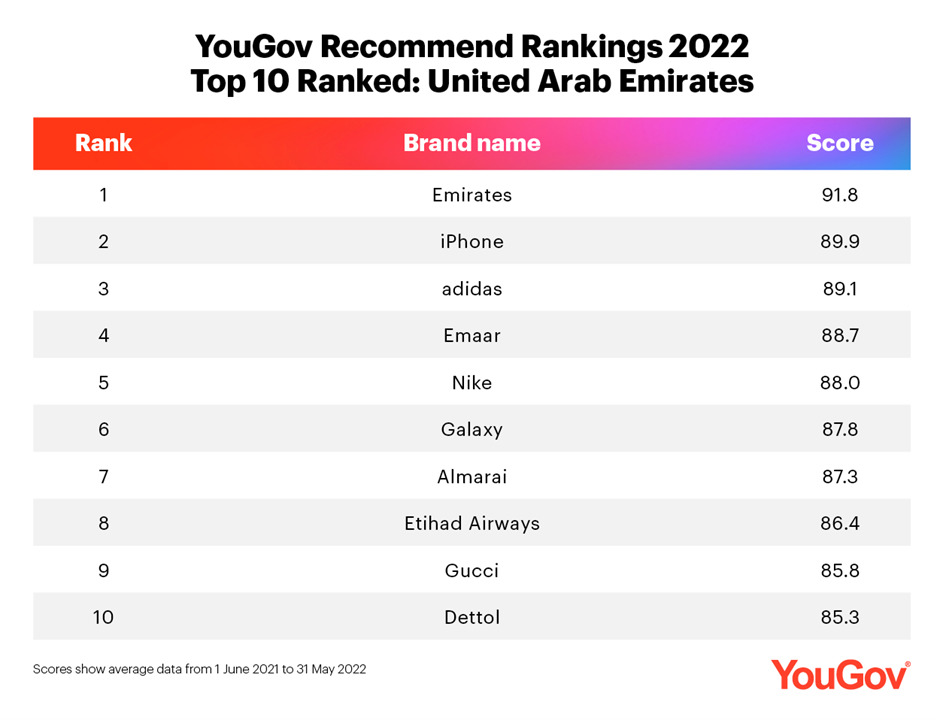 iPhone and Adidas remain in second (89.9) and third (89.1) this year as well, with minor uplifts to their scores. Another sportswear brand to re-feature in the 2022 list is Nike in fifth, with an increment of +1.1 to its score. Similarly, iPhone’s biggest competitor Samsung Galaxy features in sixth (87.8), improving its year-on-year score by +1.7.

Alongside Emirates, Etihad Airways also features in the list. The airline brand moved down three places this year to eighth (86.4), without much change in its score.

Ranking highlights the strength of local brands in KSA

Meanwhile, Saudia (Saudi Airlines) has dethroned Adidas to top the list of KSA’s most recommended brands, with a Recommend score of 88.6. The kingdom’s carrier airline made an improvement of +2.2 to its score over the past year, moving up two places to the top of the rankings. 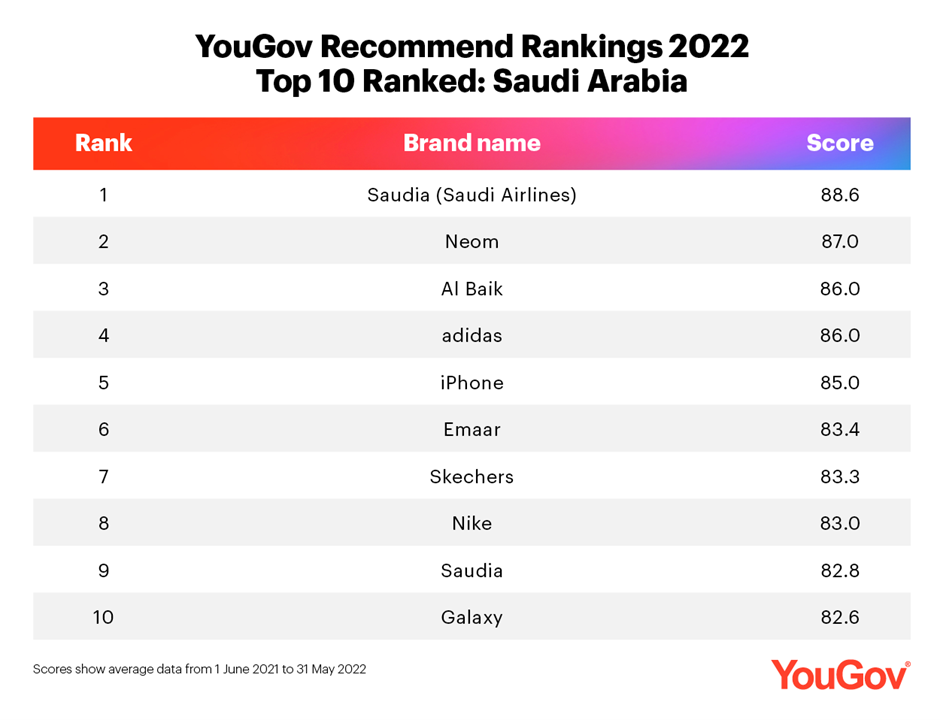 Homegrown brands have made large strides over the past year. In addition to Saudia topping the list, the kingdom’s futuristic city Neom moved up two places to second, with a score of 87.0, and Al Baik jumped up three places to third (86.0) in this year’s rankings.

Last year’s topper Adidas moved down three places to fourth (86.0), with a decline of 1.9 points to its year-on-year score. Other sportswear brands also dropped in the rankings, with Skechers falling down two places to seventh (83.3); however, Nike remained in eighth (83.0) despite registering a decline in its score.

Also featured in the list are two leading global smartphone brands. While iPhone moved up four places to fifth (85.0) in the 2022 rankings, Samsung Galaxy made a brand new entry in tenth (82.6).

Finally, the 2022 rankings saw Emaar and Saudia dairy make a debut in the top ten list, placing sixth (83.4) and ninth (82.8), respectively. However, the rankings saw the exit of some other brands from the top ten this year, namely Emirates, Hilton Hotels & Resorts, and Almarai.

The YouGov Recommend Rankings 2022 have been calculated between ​June 1, 2021, and May 31, 2022, using data collected from members of the public in markets around the globe every day, from the flagship YouGov BrandIndex tool.

Every brand’s performance is tracked daily against a range of metrics, and the Recommend ranking measures the percentage of a brand’s customers who would recommend it to a friend or colleague. All brands have been tracked for at least six months to be included in the rankings. The scores are representative of the general population of adults 18+​. All Recommend scores are rounded to a single decimal place.