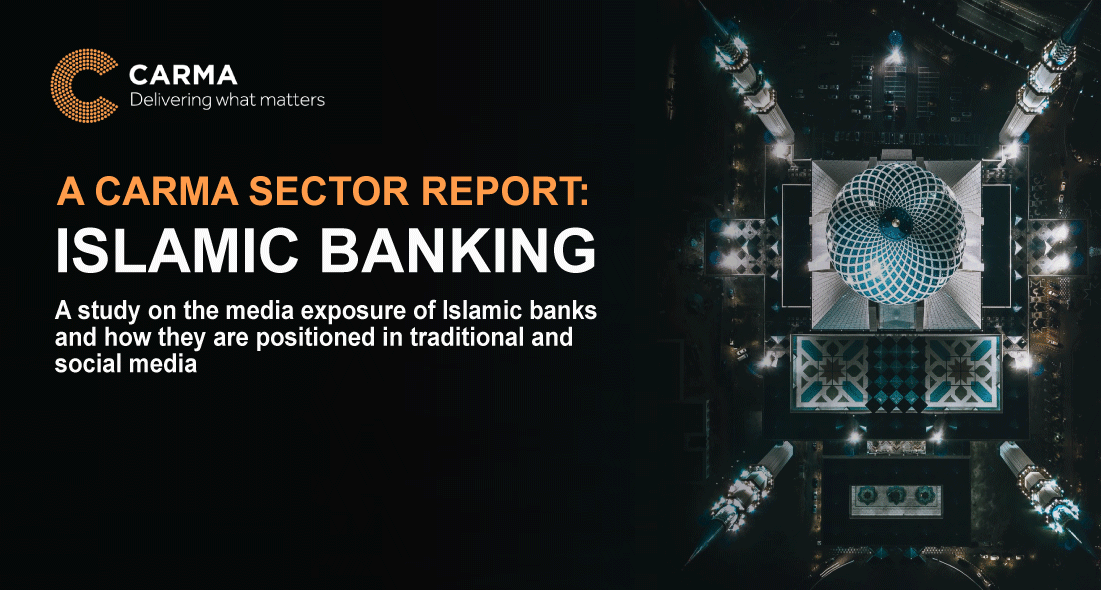 Media intelligence service provider Carma has launched a deep-dive Islamic Banking report that utilizes media monitoring tools, advanced analytics, and data-led intelligence to examine the visibility of 20 Islamic banks in the MENA and Asia regions across both traditional and digital media.

The report also highlights key trends in Islamic banking; the most notable being a general rise in influence of Islamic banks within the finance sector in general and rapidly growing engagement with audiences in both regions.

This growth is attributed to several factors, including pandemic-influenced financial uncertainty and the exposure of instances of global corruption that make the overall transparency and collaboration advocated by Islamic Banking increasingly appealing.

A strong focus on digitization and digital offerings across products and services also helped strengthen the overall position of Islamic banks among audiences in both traditional and social media. Carma’s report notes that “Throughout the pandemic, digital services were prioritized, as banks were reported to have enhanced their digital footprint offering multiple solutions. KFH, ADIB, and QIB were stated to have taken the lead to integrate solutions into their strategies, considering AI abilities and the importance of FinTech. Personal finance through portals and transfer systems was introduced, easing financial activities amidst the COVID-19 pandemic.”

The comprehensive data-led study into media exposure and perception of Islamic banks identified not just pertinent topics, themes, and subject matter (notably seamless digitalization, hyper-personalization, and evidence of a commitment to CSR initiatives), but importantly also considered the way in which this content was consumed, how the subject matter was perceived, and how visual the banks in question were across both traditional media and social media.

For the purposes of the study, all relevant traditional (online) media articles were assessed (the report notes that a total of 1,500 articles from online media outlets with specific mentions of these banks were analyzed) as well as all original Facebook and Twitter posts and direct and indirect mentions of the bank on social media (a total of 3,022 relevant posts from Twitter and Facebook, 1,840 Twitter unique mentions, 14,883 retweets, 1,182 Facebook unique mentions, and 279 shares were analyzed).

To cite an example, in the MENA region Carma found that “Three major topics were highlighted in traditional media for the banks: Corporate news, Financial results, and Banking Services. Favorable coverage displayed the banks' financial results and corporate issues entailing growth, the issuing of Sukuk bonds, and initiatives taken to empower banks and communities alike. KFH, ADIB, and Al Rajhi were the most favorable banks as retail lending, COVID-19 assistance, disclosure of financial results, and digitalization positioned the banks positively.”

Perhaps most interestingly, the report paid significant attention to brand perception. The results of the study enabled Carma to pinpoint the five most favorable Islamic banks in both MENA and Asia.

Carma utilized its proprietary Favorability Rating System and Sentiment Scoring to look even further into the behavior of these banks, considering social media engagement levels, identifying the topics that gained the most media coverage, ascertaining if this content was received positively or negatively, and establishing in which countries within the region they performed best.

Founder and CEO Mazen Nahawi said in a statement, “The last two years has seen the way in which we live our lives shift significantly – and by using our advanced media monitoring tools, data insight instruments, and analytics, we have been able to create a series of deep-dive reports on the ways in which the world has changed. This report – which dives into the rise of Islamic banking – will no doubt prove invaluable to the banks profiled – and their competitors. Furthermore, it acts as a clear example of how uniquely positioned Carma is to deliver fully tailored, deep-dive reports that provide unique insights and tangible results across multiple industries and subject matters.”