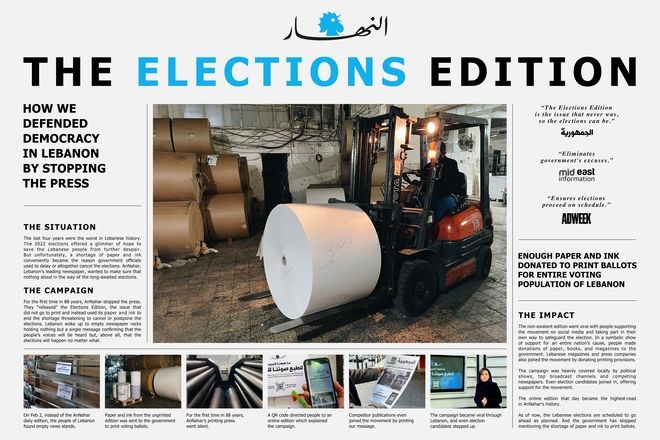 A campaign from Lebanon’s AnNahar newspaper has won the Print & Publishing Grand Prix at Cannes Lions. The "Election Edition" by Impact BBDO from Dubai was a non-existent newspaper, something that Jury President Natalie Lam, Chief Creative Officer at Publicis Groupe APAC and EMEA, described as "quite meta" for the Print & Publishing category.

The newspaper highlighted the Lebanese government’s refusal to hold elections. One of the government’s excuses was a shortage of ink and paper for ballots, so for the first time in its 88-year history, AnNahar for one day stopped its print edition and donated its ink and paper to polling stations. It put up empty news racks to highlight the action, and the non-existent newspaper went viral.

According to Lam, the jury felt that “this was the one piece of work that really stood out and cut through the clutter. The fact that a publication decides not to publish anything made a really strong statement.”

“Besides the power of the idea, we also keep on thinking 'How do we make this category exciting for the newer generation?'” she added. “We can reward great ideas but then we can reward something that shows an innovative out-of-the-box solution for old-school media.”

Dani Richa, Chairman and CEO of Impact BBDO MEA, said, “We are very pleased to see Impact BBDO win a second Grand Prix for AnNahar Newspaper at Cannes Lions after having won the first MENA Grand Prix in 2019 – this goes to show the importance of consistency and determination for change. The irony is that it’s a Grand Prix in Print & Publishing when there was no printing at all – something that shows that the power of an idea can transcend design.”

Impact BBDO and AnNahar's partnership has resulted in big wins at Cannes Lions: apart from the Grand Prix in 2019, the agency also won a Gold Lion in 2021 for The New National Anthem Edition.