The region picked up a record two Grands Prix and many other awards.

2022 was a good year for the Middle East creative industry at the Cannes Lions International Festival of Creativity.

Most significantly, the region broke its own record, grabbing two Grand Prix.

The first one went to Impact BBDO in the Print & Publishing category for its “The Election Edition” campaign developed with Lebanese newspaper An Nahar. The work was also awarded a Gold and a Silver in Direct, Silver in Print & Publishing, Silver in Media, as well as Silver and Bronze in Outdoor, and Bronze in PR. Notably, Impact BBDO was the first agency in MENA to win a Grand Prix at the world-famous festival in 2019, also with An Nahar.

The other one went to Havas Middle East's “Liquid Billboard” initiative with Adidas, in the OOH/Cultural Insight category. This campaign also earned itself a Gold, 2 Silvers, and 1 Bronze in the Outdoor category, as well as a Silver in Media, while Havas received another Silver in the Entertainment Lion for Sports for its Adidas "I'm Possible" user-generated digital billboards.

Meanwhile, Horizon FCB Dubai ranked third in the region, taking home 3 Silvers in Media, Digital Craft, and Creative Commerce for its "Breakchains with Blockchain" initiative created for the Children of Female Prisoners Association in Egypt. 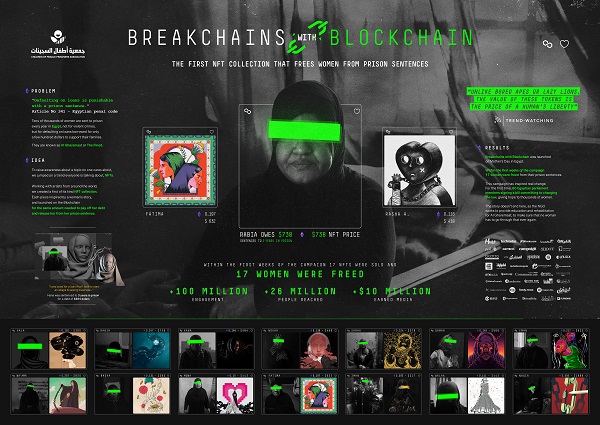 Reham Mufleh, GM of Horizon FCB Dubai, said in a statement, “Cannes this year was a special celebration! We were not only celebrating creativity but also connecting together as an industry again; minds and souls. And to top that, we came back with 3 Silver Lions to place Horizon FCB in the Top 3 Agencies in the MENA region! There are no words that can describe my gratitude and happiness. I’m thankful to everyone who made this possible and hopefully, this will only be the beginning… after all, our Horizon is ‘Never Finished.’”

Mazen Jawad, CEO of Horizon Holdings, added, “Happy and grateful, this is not only our first win at Cannes but we made it to the top 3 most awarded agencies in the region. This is just the start of a lot more to come. We’re living and breathing a never-finished journey to keep creating work that makes the perfect equilibrium between data and creativity to generate the desired economic multiplier for our clients.”

TBWA\RAAD grabbed a Silver in Direct for KFC with the "Chickenstock" campaign; and VMLY&R Commerce MENA received a Silver in Social & Influencer for its work with Twitter on "Feminine Arabic." The campaign, launched with the support of VMLY&R and Hill+Knowlton Strategies, was celebrated for its creative social thinking and strategic influencer marketing solutions. Carla El Maalouli, Head of Marketing at Twitter MENA, said in a statement, “We are honored to have been recognized by Cannes Lions this year for a campaign that captures our ethos of inclusivity. As a company, Twitter is continuously exploring new ideas and projects to ensure the platform is representative of the diverse voices that shape the conversation; the “Arabic (Feminine)” language setting is a continuation of our work around inclusive language. The overwhelming support received from our community helps us continue to focus on developing and shaping Twitter to best serve our audience and the wider industry.”

Lastly, Keko Dubai was awarded a Bronze in the Film Craft category for its Drive2Extremes campaign with Porsche; and the UAE Goverment Media Office received a Bronze in Media for its "Warm Winter Livestream."