Between May 1-30, 2022, the top three most discussed topics were electronics, entertainment, and education, followed by health, finance, malls & retail, automotive, and telecommunication. 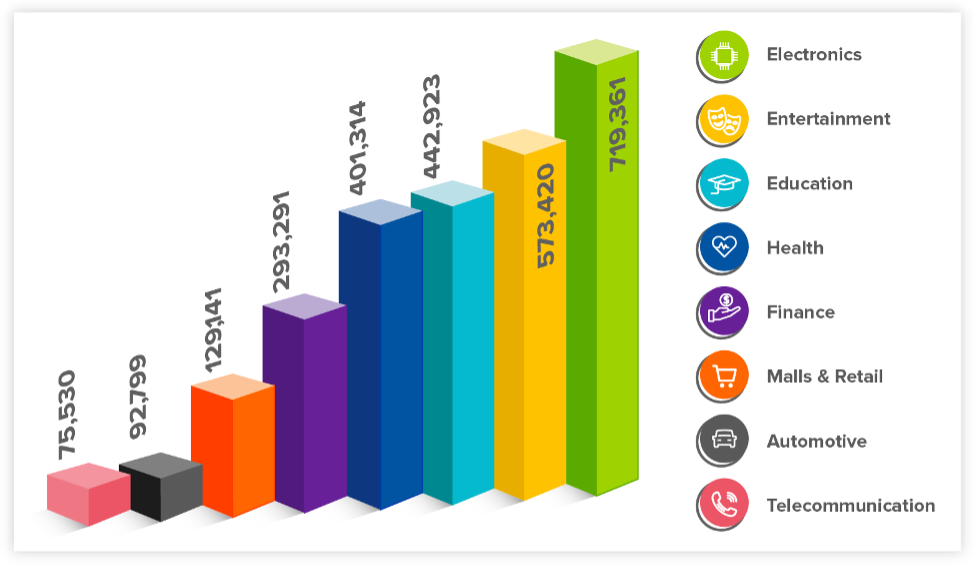 From competitions to technology-driven topics, all the way to Eid celebrations, sports talks, and educational ones. Well, that’s just all over the place! The online conversation was indeed lit, and it wasn’t super easy to sift through the noise and select the most relevant conversation drivers. Since it’s kind of what we’re here for, we still did it for you.

Keep on reading to learn more about what was discussed and addressed during May 2022 in the GCC.

It wasn’t quite the shocker for competitions and unboxing videos to be at the forefront of the conversation, based on what we’ve been noticing lately. Who doesn’t love to win? Or maybe even enjoy that weird satisfaction that comes from unboxing videos? Well, to each their interest, we gotta say.

Promotions, competitions, and giveaways made it to the top of the conversation charts as usual. The new features of the Apple Watch, mainly the body temperature one, also resulted in a number of conversations, with some people really looking forward to it, not minding the skepticism of others. Gotta admit, whenever we’re hit with Apple news, you can find us all scrolling down our screens ignoring our daily tasks, for like 10 minutes, TOPS. Whether it’s just a fake rumor or not, we were astonished by the fact that we were going to learn more about our body temperature with our Apple watch! Will it happen? Will the smartwatch confuse hot summer effects with sickness? Guess we’ll have to wait and find out!

Body temperature or not, we’ve got some Apple flash news for you! The executive Ian Goodfellow decided to quit working at one of the biggest companies to ever exist because everyone had to physically go to the office. Is this the new era where we will always prefer sitting on our couch having some popcorn and working at the same time? Would that really be ideal? And are we seeking a world where there are less interactions? Guess we’ll have to find that out too! Ending the Apple stream for the month, Essex Serpent is out now on Apple TV+! Looks like we’re really going to need that WFH setting soon again, right? Maybe without a deadly virus this time.

Now, let’s all hear it for the new Xiaomi 12 Pro device that has been leading most of the tech conversations for the past month. Tech enthusiasts were all hyped up about it, reviewing and highlighting its various options and advantages. They’d talk about the look, the feel, and apparently one of the best features out there, the 6.73” AMOLED DotDisplay screen. Its colors, lights, and neatness, as well as the device’s high camera quality, made us wanna throw those iPhones away and head to join the Android squad. Will you do the same?

You know what they say, creativity comes in all shapes and forms. Fine, we just said that. And it’s true! With new advanced tech options, we’re free to customize in perfectly advanced ways all sorts of things, including our phone setups, lock screens, and wallpapers. Who would have thought that images could switch and move without watching a video? On that note, we spotted some users sharing their lock screen screenshots in a tweet thread, getting others in the GCC all hyped up, basically marking another key theme in the electronics conversation during the month.

Did Apple just make the most customisable smartphone lockscreen ever on iOS 16?

I didn't expect that coming from Apple, honestly. 👏#WWDC22 pic.twitter.com/jWb4r4CKjD

Tech and specifically electronics constitute some of the biggest parts of our lives and seeing so many topics really brings out the best out of inventors and creators, leaving us to wonder about what the future holds for us!

Moving on to the second most trending topic, Entertainment. It’s indeed a broad, broad section. But boy do we love it!

Eid was really lighting up the month. It was spreading happy, positive, and extravagant vibes! Speaking of, did anyone else think of getting a totally new Eid outfit? We sure did! After a pandemic that hit so, so hard, we really needed that kind of celebration!

So, turns out we weren’t the only ones to celebrate with some good work! New movie screenings, festival nominations, and other art forms took different shapes, and well, shades. The Egyptian star Tamer Hosny decided to add some very special Eid spark with a new movie and definitely songs that will break our hearts.

Some things end, others begin. But what we’re sure of, is that almost everyone has been keeping track of the Johnny Depp trial. Don’t you just love it that we call it that? We all knew who was going to win. No spoilers, but maybe, just a tiny little hint on it, we do love justice and everything that comes with it including honesty!

No matter what happens, truth races to find a way to come out. Do you know what else is racing? Formula E cars! Now including McLaren Racing, the competition will surely be top-notch!

And since you already know that we like to celebrate achievements, Little Mix’s fame was highly mentioned last month, and it is so nice to see how the ladies grew and became as famous as they currently are.

Wow! Now that was entertaining! We got news from all around the world and felt various emotions, but what’s for sure is that we were always learning something new. Speaking of, let’s move to our third most trending topic in May, which is Education.

Have you ever been the top student in your class? Don’t worry, no one’s taking any notes either! But do you really have to? Mansour Hamadeh, a 20-year-old Egyptian student, has created digital prosthetics that are highly advanced and is set to meet with the Russian President, Vladimir Putin. Hamadeh has mixed Engineering and Medicine in order to come up with a beautiful creation! That’s gotta be a world record.

Now moving on to a new Guinness World Record, Adam Saeed, a young Bahraini student broke his own record in recognizing 85 countries in one minute, and 61 currencies. Would’ve loved to have Saeed in class to get better grades!

Education is really beautiful and with all that's going on, we’re always looking forward to hearing more success stories from our youngsters!

The rest of the topics came next and varied in volume, but what’s for sure, is that we enjoy reading and learning more about the trends we present you with!

We hope you enjoyed this month’s news!