The 6 Most Important Social Media Insights for 2022

Global Web Index's (GWI) social flagship provides the most important insights on the world of social media, from keynotes on how attitudes are changing to the very latest figures for platform engagement. 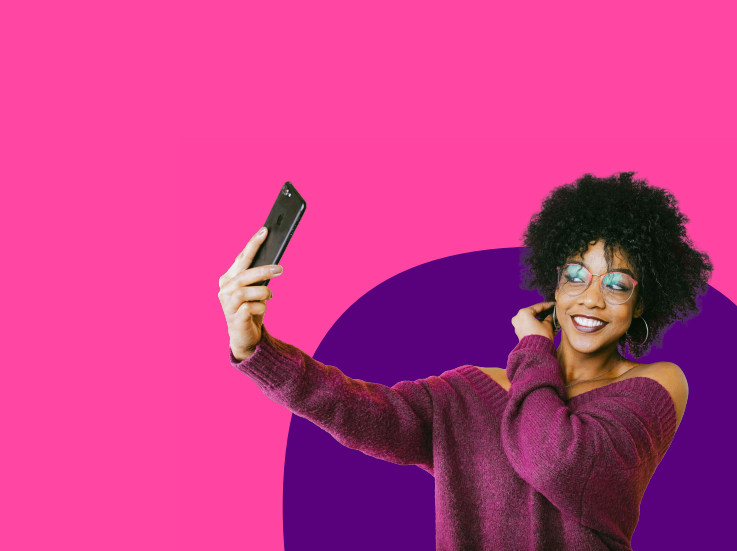 The report offers an update on long-standing trends, but also highlights any noteworthy changes over the past year.

All figures in this report are drawn from GWI’s online research among internet users aged 16-64. Each year, GWI interviews over 700,000 internet users aged 16-64 via an online questionnaire for our Core dataset. A proportion of respondents complete a shorter version of this survey via mobile; hence the sample sizes presented in the charts may differ as some will include all respondents, and others will include only respondents who completed GWI’s Core survey via PC/laptop/tablet.

Here are the key insights from the report:

Q2 2020 boasts the highest figures on record for global social media usage as widespread lockdowns forced consumers to find ways to fill their free time. Although, engagement has fluctuated a little since, but it ultimately leveled off. The MEA region bucks this overall trend, with its consumers still making leaps in usage. 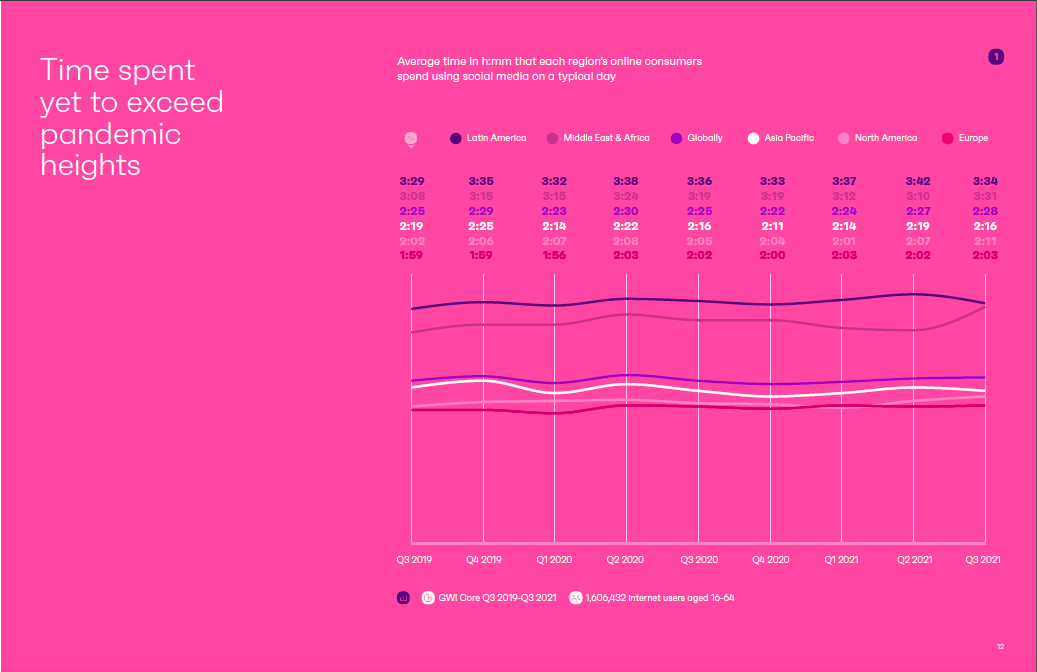 As vaccines give more people the confidence to venture outdoors, competition for their spare time is bound to intensify. 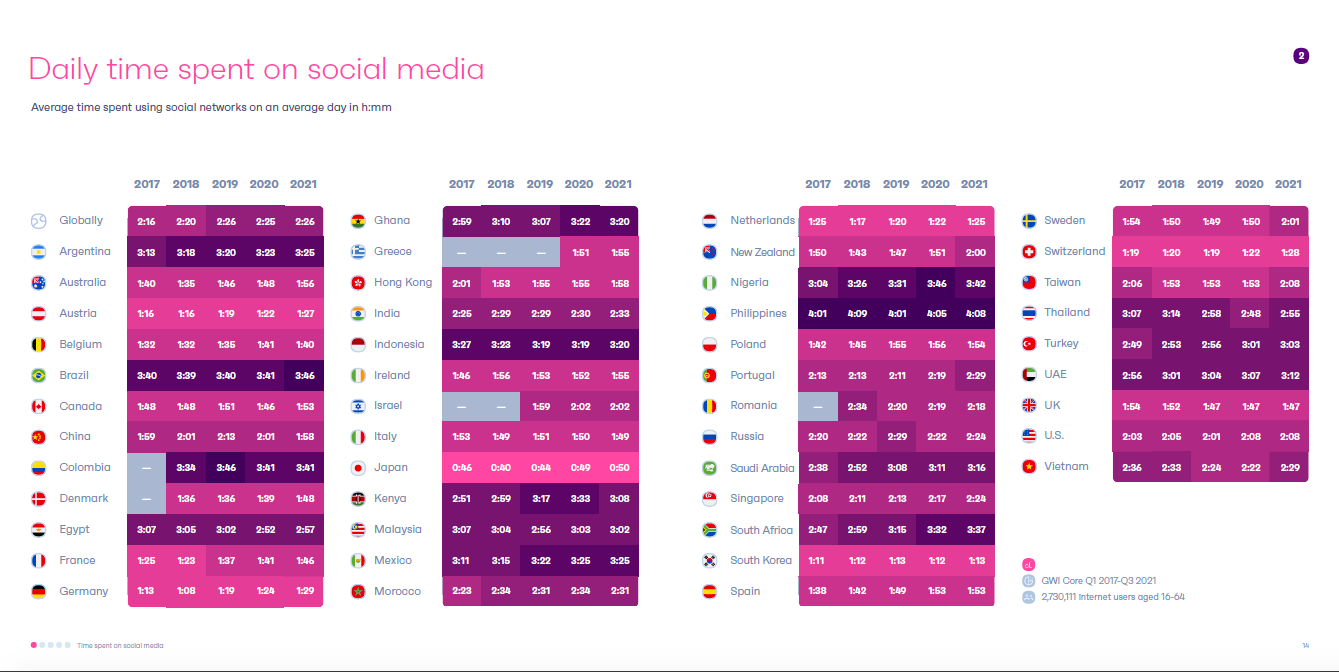 Since 2020, the number of consumers using TikTok monthly has grown by 32%. Despite its youthful reputation, engagement has grown the most among Gen X and baby boomers. Its popularity doesn’t show any signs of slowing and older consumers have a hand in this trend.

Since the end of 2020, slightly more 57-64s log onto social platforms to follow influencers, avoid missing out on things, and connect with good causes. And apps like TikTok are great spaces for them to see fresh content and get bursts of inspiration. Many older adults see themselves as creative (43%), adventurous (28%), and ambitious (26%), especially the TikTokers and Pinners among them. 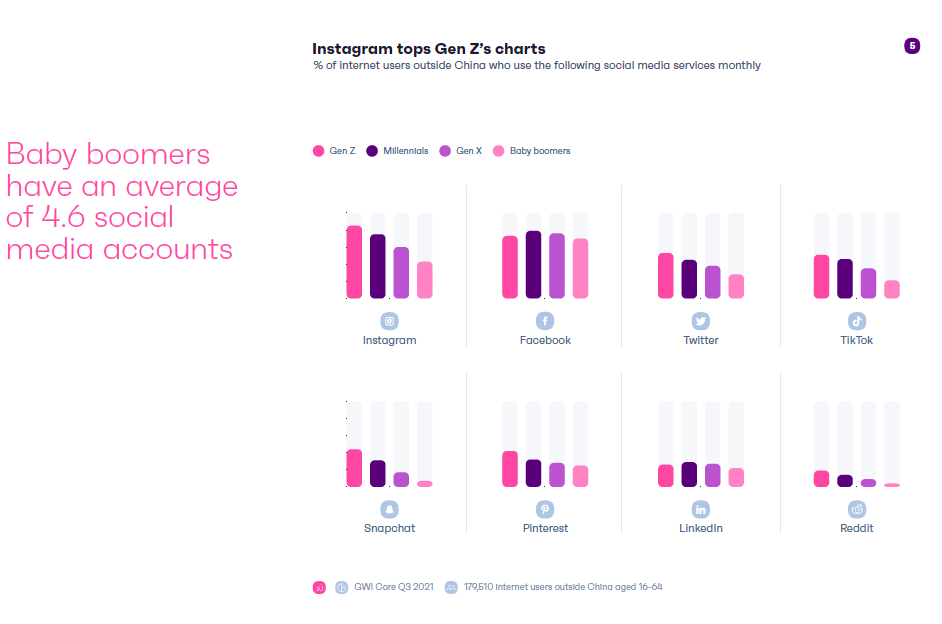 Social media typically fulfills a wider brief in fast-growth markets like China than in the West. However, GWI's data suggests that change is coming. Compared to 2020, people in North America are more likely to log onto platforms with commercial activities in mind.

The Chinese social scene is very dynamic. WeChat’s topped China’s list since GWI started tracking it in 2015, but the gap between it and its competitors is closing. Since 2020, the difference in the number of people naming WeChat or Douyin as their favorite platform has lessened by 9 percentage points, with daily usage figures also narrowing within this timeframe. We’re likely to see some big shifts in 2022, especially now that a range of new antitrust rules have been introduced.

Short-form video is most popular, but long-form lands well with Gen Z

Outside China, 61% of social media users say they view or create a story on Snapchat, Instagram, or Facebook at least monthly, and there’s been a rise in engagement with Reels. It’s not all about bitesize content though – Gen Z is just as likely to be watching 20+ minute videos as they are less than a minute.

Short clips are typically associated with Gen Z, but the gap between both long and short-form videos is the greatest in Western markets and among baby boomers. This is explained by younger consumers’ appetite for how-to videos and vlogs. A large portion of Chanel buyers are 39 or under, and the brand’s very successful YouTube channel caters to its audience well by offering a stream of make-up tutorials and product review videos. 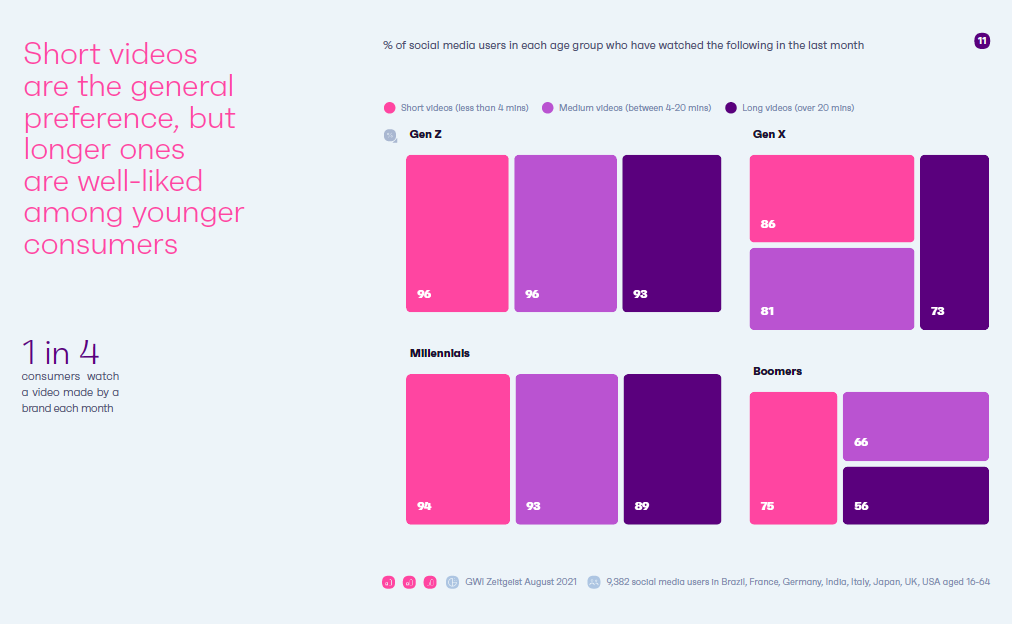 The power of a good story

Stories are very widespread. Outside China, 61% of social media users view or create a story on either Snapchat, Instagram, or Facebook monthly. This number has increased slightly since the end of 2020 and already surpassed three-quarters of all internet users in Latin America. Attitudes toward posting have, and continue to, change. While some are posting more, many prefer their updates to be temporary or semi-private. Less than 1 in 10 in America post comments online that they’d never say in real life, which suggests that most think twice before posting publicly, and the number who prefer to share content with friends and family privately has increased by 9% since Q4 2020. This evolving mindset is prompting more to lean on stories. 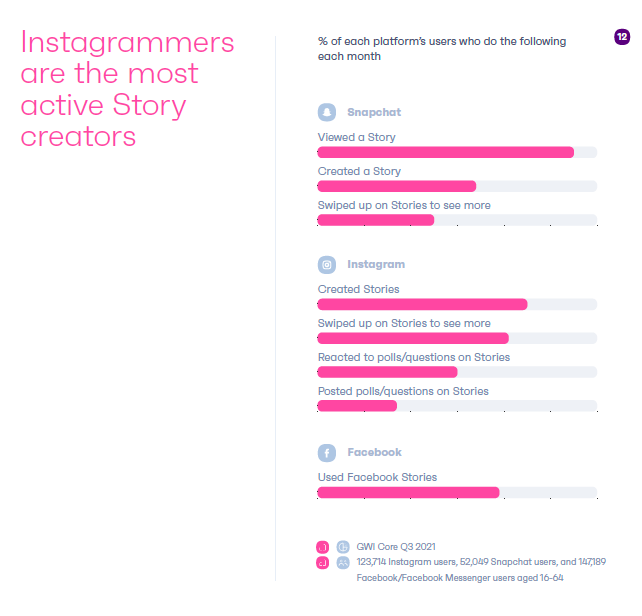 Despite security worries, engagement with Facebook Marketplace and Instagram Shopping has gone up by 8% since 2020. Brands can drive progress by inspiring UGC – which will raise awareness – and help prevent cart abandonment by taking feedback on board.

Social shopping has taken flight, but it’s landing differently around the world. Latin Americans lead when it comes to engaging with promoted content and making in-app purchases. At the other end of the spectrum, Europeans are the most likely to use ad-blockers, the least confident about handling their data online, and the most reluctant to checkout in social spaces. Despite some groups remaining unsure, globally, social commerce is expanding. The number engaging with Facebook Marketplace and Instagram Shopping Bag has climbed since 2020, and these channels are set to claim an increasingly bigger share of total e-commerce sales. Brands that understand what drives their target audience to make social purchases and use this data to shape their strategy is likely to be among tomorrow’s winners.