The Power Of Visualization
Insights Industry
Back

The Power Of Visualization

Dutch artist and innovator Daan Roosegaarde is on a mission to upscale the conversation about humans’ future. 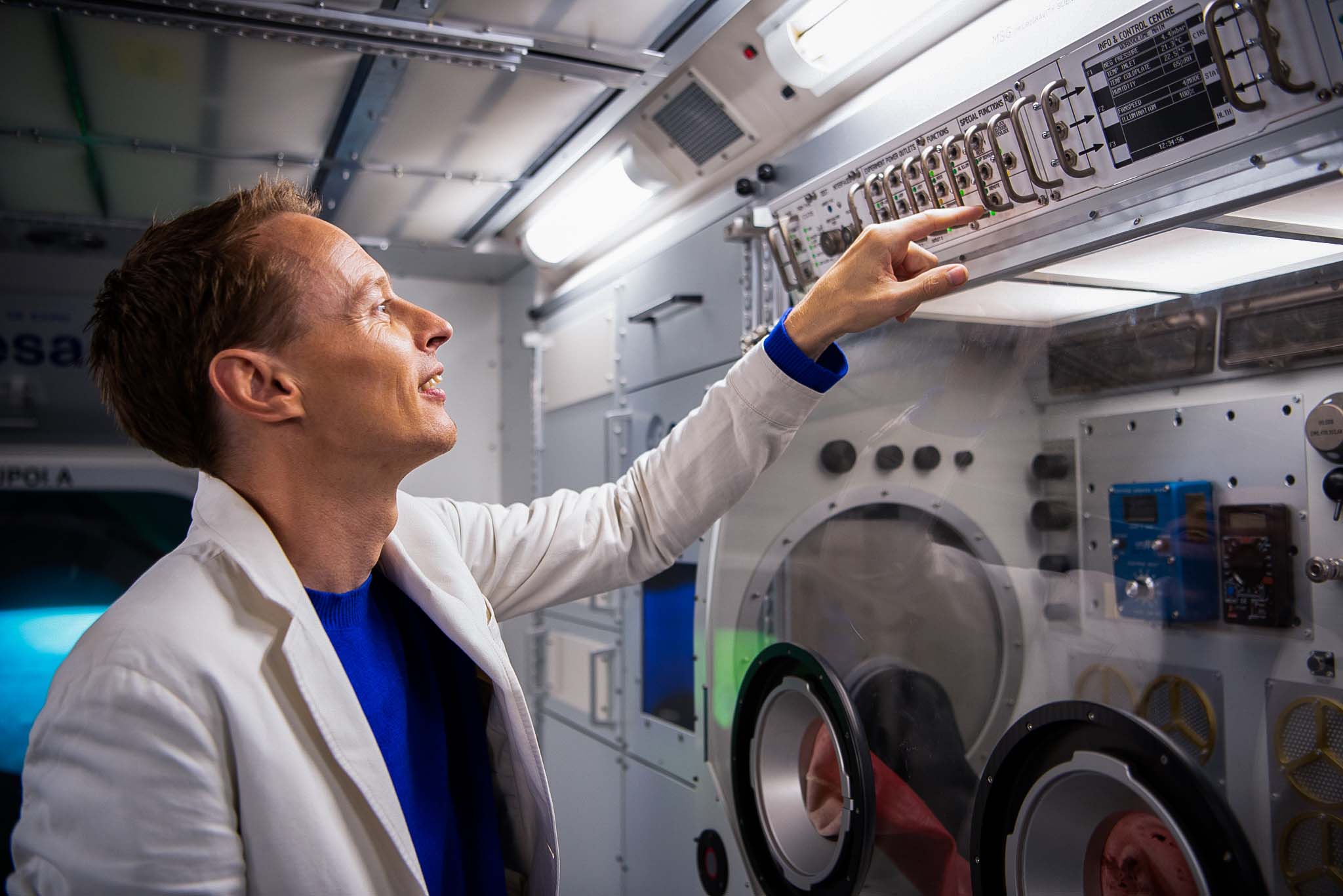 Dutch artist and innovator Daan Roosegaarde is on a mission to upscale the conversation about humans’ future. Instead of focusing on what people know scares them, Roosegaarde creates projects that tickle humans’ curiosity about the future, by merging technology and art in urban environments. His Roosegaarde Studio constantly comes up with a stream of innovative creations, such as the Smog Free Project, that uses a 7-metersmog tower to filter pollution and transform the impurities collected into jewelry; or Icoon Afsluitdijk, an environmental art installation that includes the Gates of Light- restored floodgates fitted with prisms that reflect light from vehicle headlights.

In 2018, Roosegaarde announced his most ambitious project yet, Space Waste Lab, a “multi year living lab with the European Space Agency and Studio Roosegaarde to capture space waste and upcycle it into sustainable products. The current Space Waste Lab Performance visualizes the space waste above your head real-time with large beams of light. The ambition is to create the first phase of Shooting Stars from captured space waste at Dubai World Expo 2020 or Floriade 2022,” as explains the studio’s website. To create projects that speak to the human mind, Roosegaarde tells Communicate that combining “the power of visualization, the power of imagination and the power of bottom- up is a very powerful way of activating people to become part of that movement.”

“We’re so smart, beautiful. We have a body that is amazing. And somehow, we undervalue that. In today’s society, creativity is our capital,” he says. 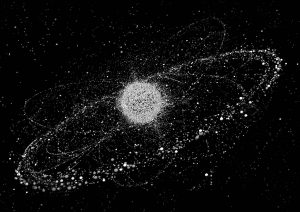 How did you think of creating Space Waste Lab?
We live in a world where there may not be a lack of money or technology, but a lack of imagination how we want the future world to look like. And if we can’t imagine the future, we won’t get there.
How art and design have a role in activating that curiosity is important. Two years ago, I was looking at one of our designers’ computer screens and I saw this sort of Jackson Pollock image, these white dots on a black background. I was like, “What’s that?” And they said, “That’s space waste.” 8.1 million kilo of space junk currently floating around our universe. That was crazy for me, that somehow, we’re not satisfied with ruining our planet; that we keep on polluting outside the Earth’s atmosphere. That’s why we launched Space Waste Lab, to visualize and capture space junk.

What’s the common strategy behind your projects?

Phase one is visualization, showing [the issue] to people, making them aware. Phase two is fixing [the issue]: speeding up the scientists to actually create a solution. Phase three is upcycling, doing something new with [the issue], giving it a new value – which, in this case, is capturing space junk with a net and, via controlled re-entry in the Earth’s atmosphere where [debris] burn, showing what a waste it is. We’re working on creating artificial shooting stars as a replacement for fireworks. This is really about visualization, but also combining different sectors – tourism, science, etc. – and trying to work together to improve the world around us.

How do you design the visualization of your projects?

I always try to really visualize it in my brain. When I have a new project, or when I have an important meeting or a presentation, I really try to imagine it as if I’m already there, walking around, communicating. How does it feel? How does it look like? What does it want from me? What do I want from it? And this is not just a sort of blah blah dream. It’s a visualization. And if I can imagine it, in a weird, beautiful way, it already exists. Once I’m there, after prototypes, after meeting all these people, I can sort of recognize it, or I can feel: “Oh, this is good; or this is bad; or I should spend money and time on this, but not on that.” So yeah, I build it up in my brain, I make a sort of mental map. It consumes a lot of time and energy, but that helps to drag it into reality, step by step. I really build it up in my brain first. I believe that when you think of something, it already exists. People say it’s just an idea. No! When you think about something, that’s already a manifestation. For me, it means it already exists!

How does this translate into a project for the world to see?
I initiate my own projects, like Space Waste Lab. I spend my own time and money, because it’s important. I find partners – a city or a minister or a museum. There needs to be a sense of urgency and a desire to change or to activate people. Then you get a good team of designers and engineers, a pizza hotline that you tag on the door, and you say: “Nobody leaves the room until we have a prototype.” And you get to work. Yes, it’s very complicated, very difficult. It’s not necessarily fun. People will think this is all fun, No, no, no! It’s not. It’s not a fun life. It’s a complicated life. The best way to describe it is that you like to have a taste in your mouth: you look for the ingredients, you start to cook, you start to figure it out. And in the end, you have your mission. But this is a continuous project process of informing and figuring it out, step by step. It’s not a letter from God.

Why do you specifically use lights in your work?
In general, light is communication, not decoration. When you look at the stars at night, it is information from history, speeding towards us at 300,000 kilometers per second. So, I think light is a
very strong tool to communicate something and to trigger associations. For example, we did an installation in Dubai a few months ago, showing the rising sea level and the importance of climate change by using like water-light, a sort of blue waves floating above your head. [Light] is a very strong activator for people. 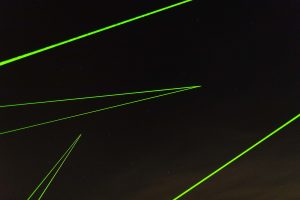 How do you think your work has helped people become more aware of important issues for the future?

People change because they somehow experience [an issue] or feel connected to it in a personal way. It’s really important to make it very visual for them to care. People do not know or care about space waste. So, we’re showing them that this waste is right there above their head, in real time. That’s when [the issue] becomes inevitable, and that’s the role of art. As a creative person, an artist and an innovator, how do you get yourself into the mindset of bringing this kind of awareness in your art? There is a ‘me’ and there is a ‘we.’ Every project that I do, I do for myself. I’m very confused: I look outside my window, I see traffic jams, air pollution, rising sea levels. It’s all very confusing, and nobody has an answer. Everybody is waiting, everybody is blaming. So I create these kinds of projects to make sense [of it], to create my own sanity. If I initiate these projects and I team up with designers, engineers, scientists… we can really create a change and show that it can be done in a different way. That’s the ‘we.’ A lot of these projects are initiated by inspiration for a better world; but they’re also triggered by irritation with the existing world. Why do we have streetlights burning the whole night, but nobody’s there? Why do we accept air pollution? Why do we accept space waste? And what can we do with it? There’s as much irritation as inspiration in every project. I’m not a minister of Science, I cannot say: “20 billion euros, green energy and no more air pollution.” But I can design, I can engineer, and that’s the power of an artist. You can make a proposal; you can share it with the world and see how people react to that. And that’s very powerful. Ideas are really powerful.

How does your own background influence your art to make a better world?

The Netherlands is below sea level. We live under the water level. So, without technology, without management, we would literally drown a horrible death. Technology is used every day to create our homes, our own habitat – technology, but also creative thinking. That sort of explains the projects that we have done, combining creativity and technology to improve the world around you, such as the Space Waste Lab: we’re working to create a clean space. Everybody has the right for clean air and clean space. Everybody has a role for clean air and clean space. I think that’s what drives me, and that’s the ethos behind all the projects. But it definitely originates from that Dutch landscape.

How integral to the project was the partnership with the European Space Agency (ESA)? Would you have been able to do it without them?

Absolutely not! That’s really interesting, because we work with ESA, that has had a clean space program for many, many years. But at the same time, it’s very simple: nobody likes to pay for cleaning up, nobody likes to clean up. So, we worked with the scientists to say: “Okay, what kinds of technologies are there? How can we make things happen? What if we capture [space debris] and make sustainable fireworks out of them?” Suddenly, it pops up in the world of entertainment; we get whole different types of budgets available; and suddenly, it becomes an inspiring story. I’m not smarter than ESA at all, but by designing the last 10 percent and by looking at it from a different perspective, we create value in a different way. We need each other. It’s a hybrid [project]!

Is this the future of motivating people to act? 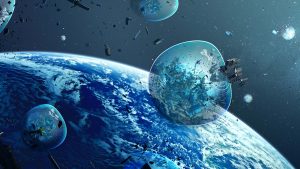 I think one of the reasons that we are stuck as a society is because we are educated in a very linear way, in a tunnel way. Everybody is an expert, but we don’t communicate, we don’t interact with each other. If you want to solve these really complicated problems, you have to be hybrid, you have to make new connections. Because I have the capacity to activate ESA and look at it with a different perception, it becomes something completely new. I’m designing a new link; I create a new value. I just kind of ‘hybrid-think’ the way to make a society which is future-proof. Because the existing way of tackling problems is simply not working anymore. You need a vision, and you need to start doing it. You need to make a mistake, and you need to learn from it. I think I’m always a sort of amateur trying to become an expert.

How can we help people get over these kinds of subconscious challenges?
We live in a world where people are scared of the future. In the 70s and the 60s, we were curious and excited about the future: we went to the moon, we had sci fi movies. Not today. “Robots will take over our jobs! The Chinese will buy everything and we’ll be jobless!” We need to initiate projects where people are not scared but curious about the future. A main reason why we’re stuck is that people hold on to what they think they know, and then invest in something new which is still unknown.